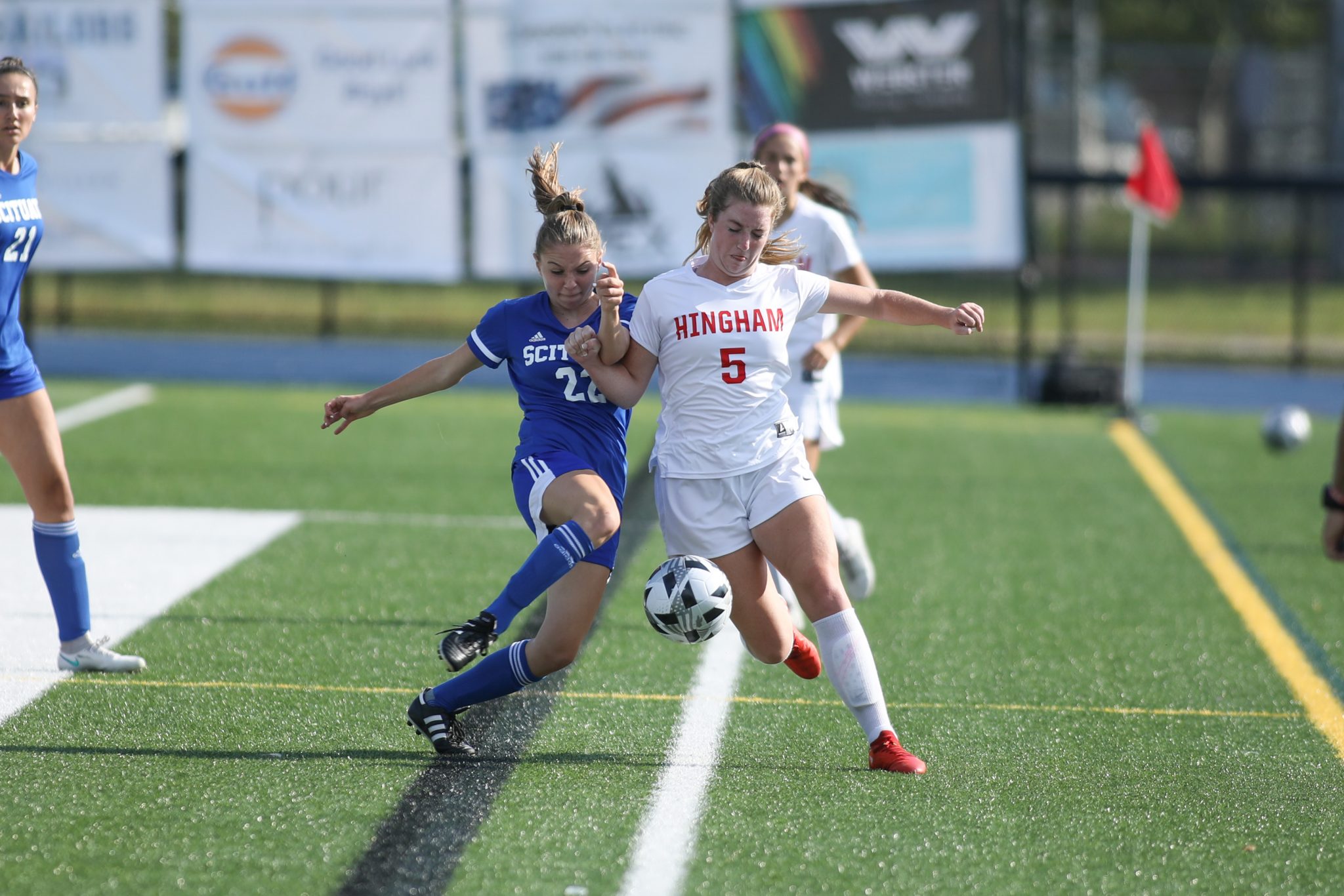 Senior captain Ava Maguire battles with a Scituate freshman Cici Griffin to get possession of the ball.

The Hingham Girls Soccer team is defending Patriot League Champions. They are coached by a highly decorated, very good coach in Sarah Dacey.  They only lost 3 seniors from last year’s team,  They have the reigning Patriot League MVP Sophie Reale returning for her junior year. The roster is chalked full of experienced juniors and seniors who’ve played together for years.  The United Soccer Coaches Poll currently has them ranked 5th - in the country.  Some might say there are lofty expectations for this team.  Coach Dacey doesn’t want to talk about it.

“Nothing!” was her response when asked what she's said to the team about expectations this year.

“The message is that we haven’t earned it yet,” she goes on to say.  “It’s nice that grandma and grandpa can brag about you, but at the end of the day we really haven’t earned anything yet.”

That was apparent in their season opener on Friday against Scituate.  While the girls came out firing in the first half with a quick goal from senior Olivia Sharkansky and one from senior captain Ava Maguire that gave them a 2-0 halftime lead, the second half was a different story.  Scituate cut the lead in half in the second 40 minutes, played great defense and gave Hingham all they could handle.

“It’s all about us not getting complacent thinking we are just going to roll through teams,” Dacey says. “Give credit to Scituate, they came out strong in the second half.  They put us under a lot of pressure.  We weren’t prepared for it.  It’s a tale of two halves, we looked really, really good in the first half and really poor in the second half.  It’s a lesson.  Hopefully we can learn from it and go from there. But credit to Scituate, they have a good team and players us really hard.”

Even though the Harborwomen only lost 3 players from last year, one of the most noticeable absences is on defense from the hole Kate Dalimonte left.  Coach Dacey has made some adjustments and thinks her current players are stepping up.

"We definitely miss Dali, but we've tucked (senior captain) Alexa Varholak in as center back," explains Dacey.  "She's doing a great job. Super athletic.  Great soccer brain. Then Reese Pompeo, who's a sophomore, getting time on the outside.  I thought Reese had a really, really strong game today."

And while this may be Dacey's second season as Hingham's head coach, Friday's game was the first "real" game she's been at the helm.

"It definitely feels way more amped up for sure," Dacey reflects. "It feels nice to have it be normal soccer (again).  You almost couldn't get upset last year with all the silly calls and weird rules.  This year is different and it's enjoyable.  To actually be able to train set pieces and all that stuff. I enjoyed it."

The Harbormen will have no time rest as their schedule is full to start the season. They have four games in the next eight days and Dacey and the team expect to get their opponent's best each and every game.  They play in Silver Lake tonight, then home for two games vs Marshfield (9/15) and Pembroke (9/17) before traveling to Whitman-Hanson for a huge conference rivalry game a week from tonight. 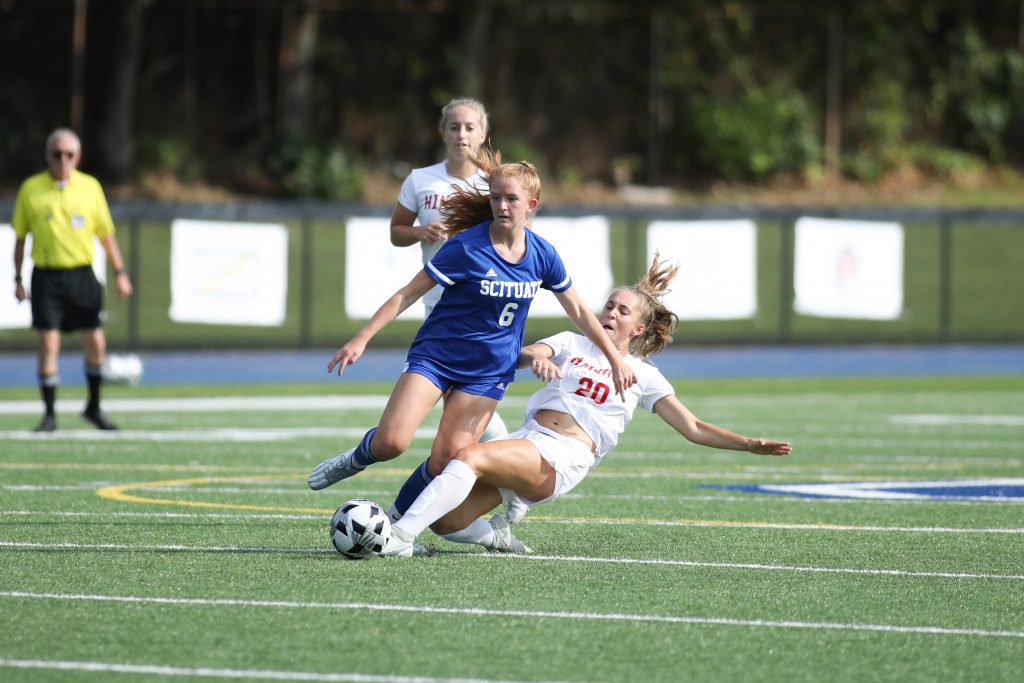 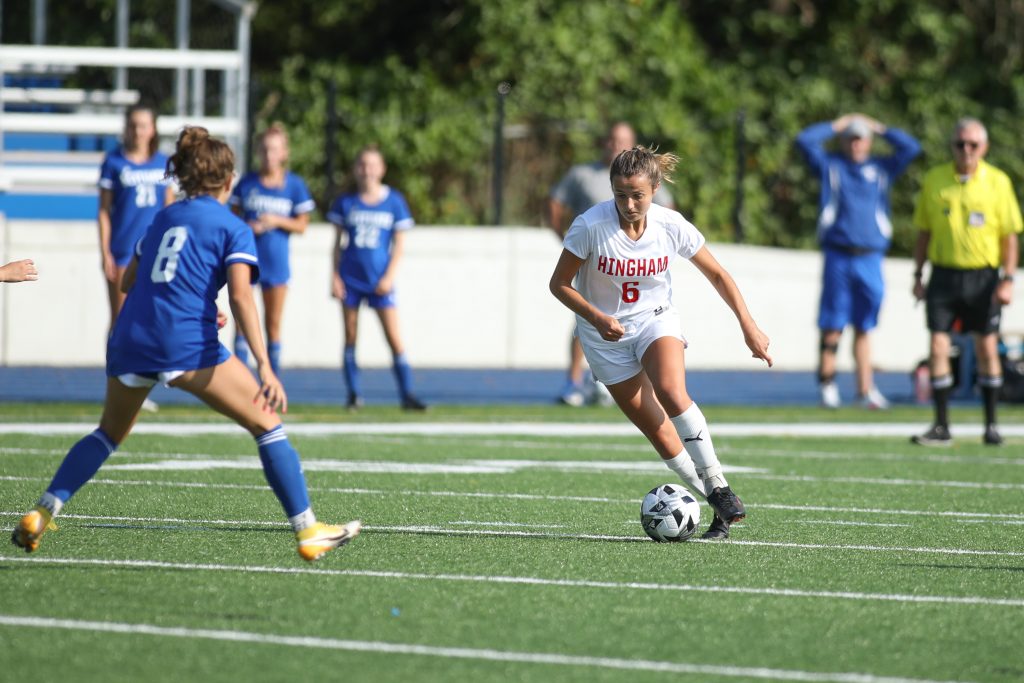 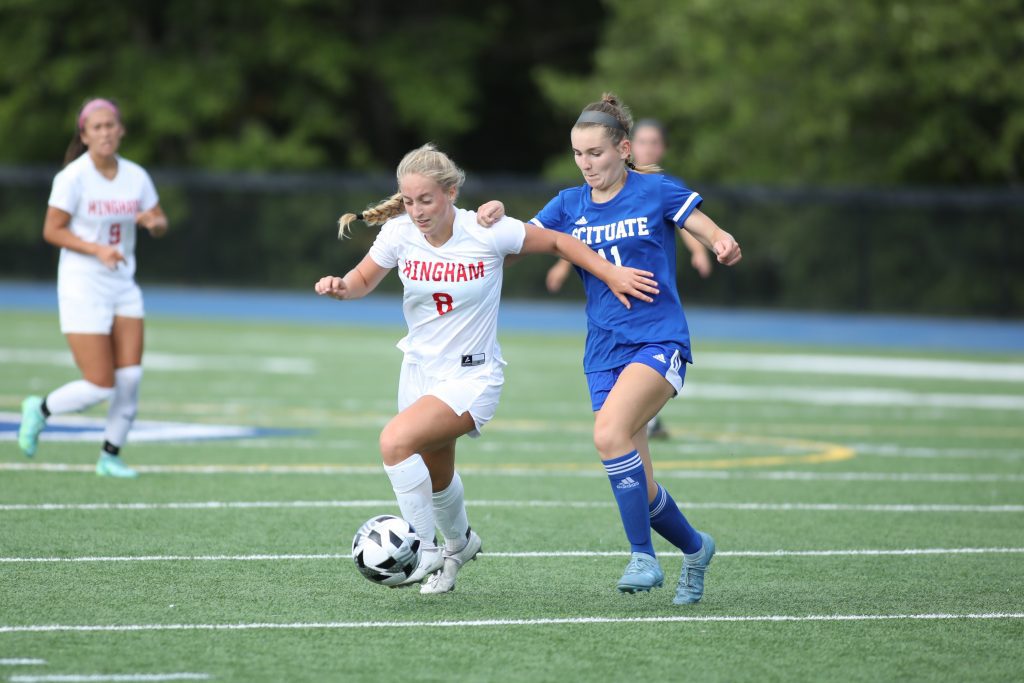 Junior Sophie Reale was fighting off defenders all game. 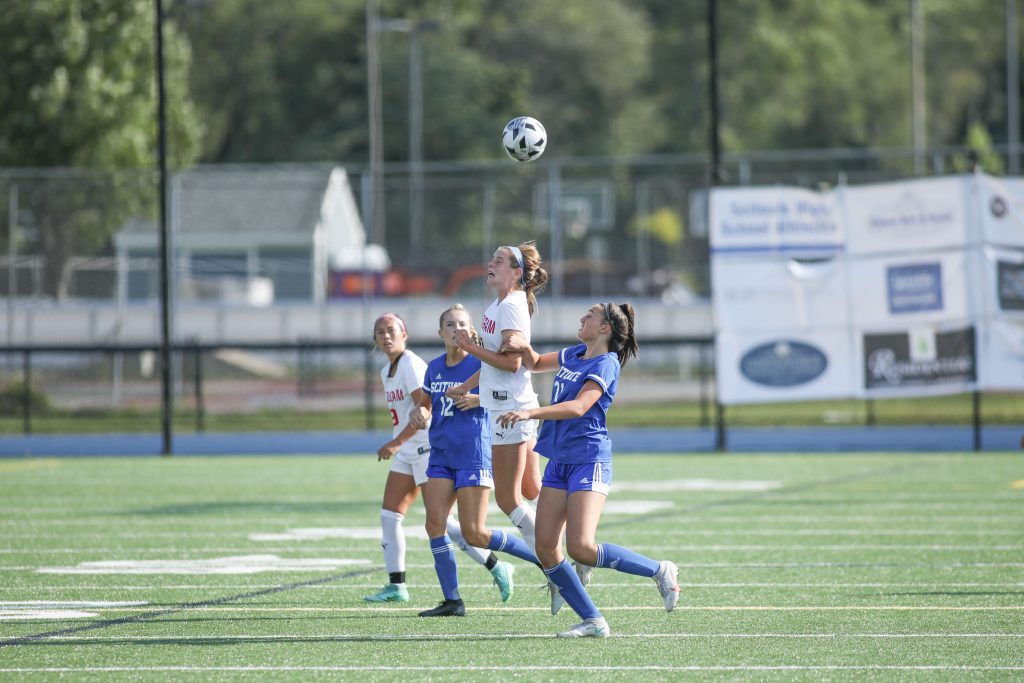 For the first time in 2 season, headers are allowed in games, as seen here by Junior Emily Gibbons. 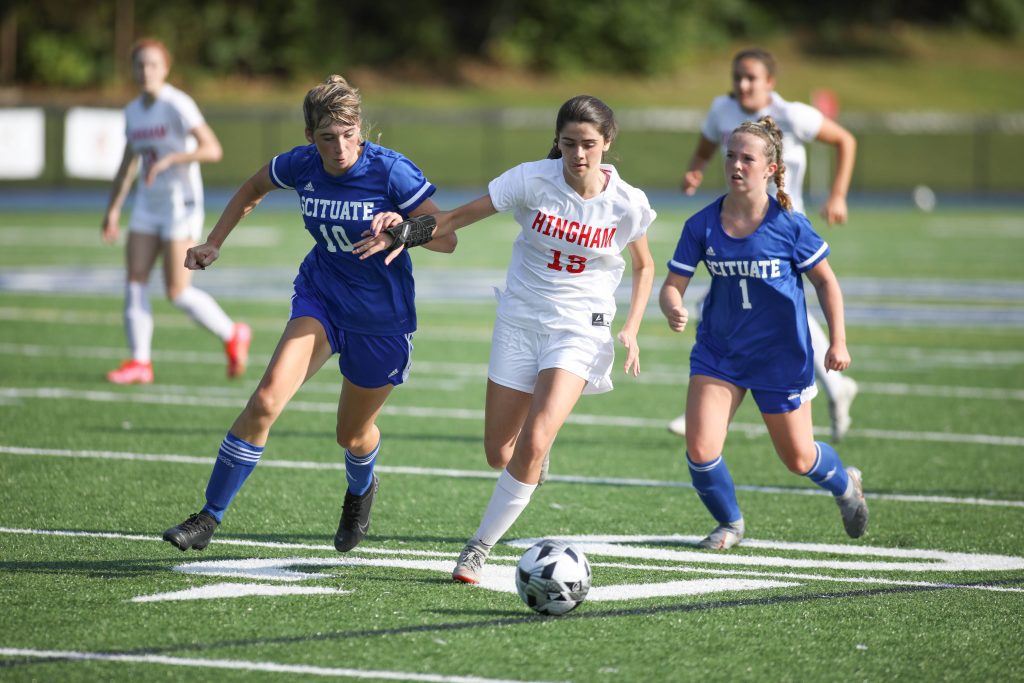 Junior Bridgette Harrington made her varsity debut on Friday. 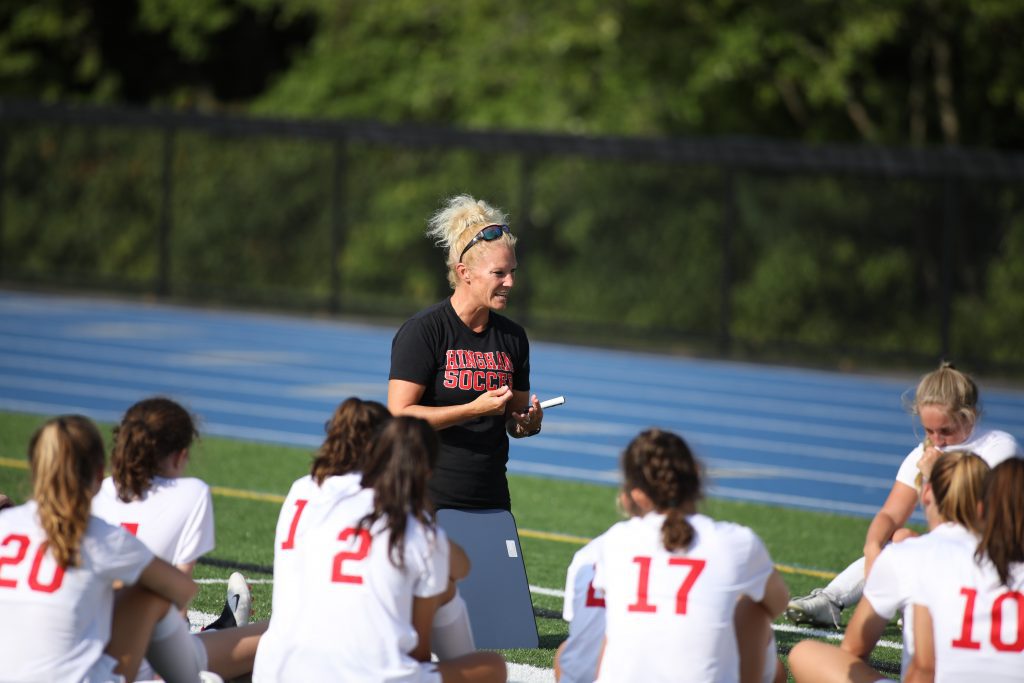 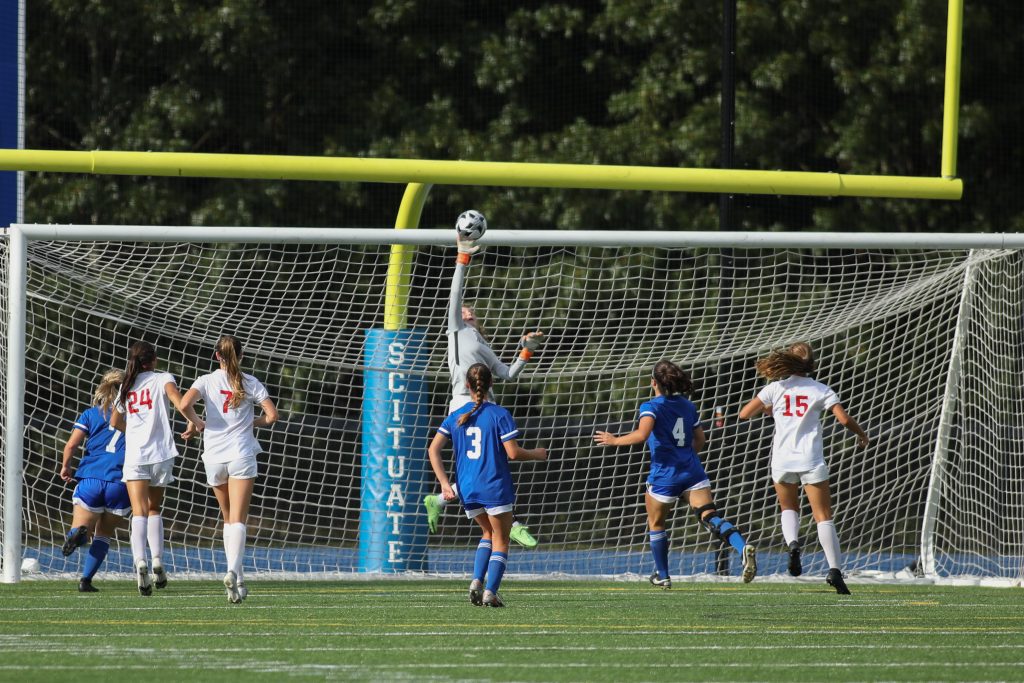 Senior goalie Kathryn Wilson got a piece of a Scituate direct kick that just made it in over her fingers. 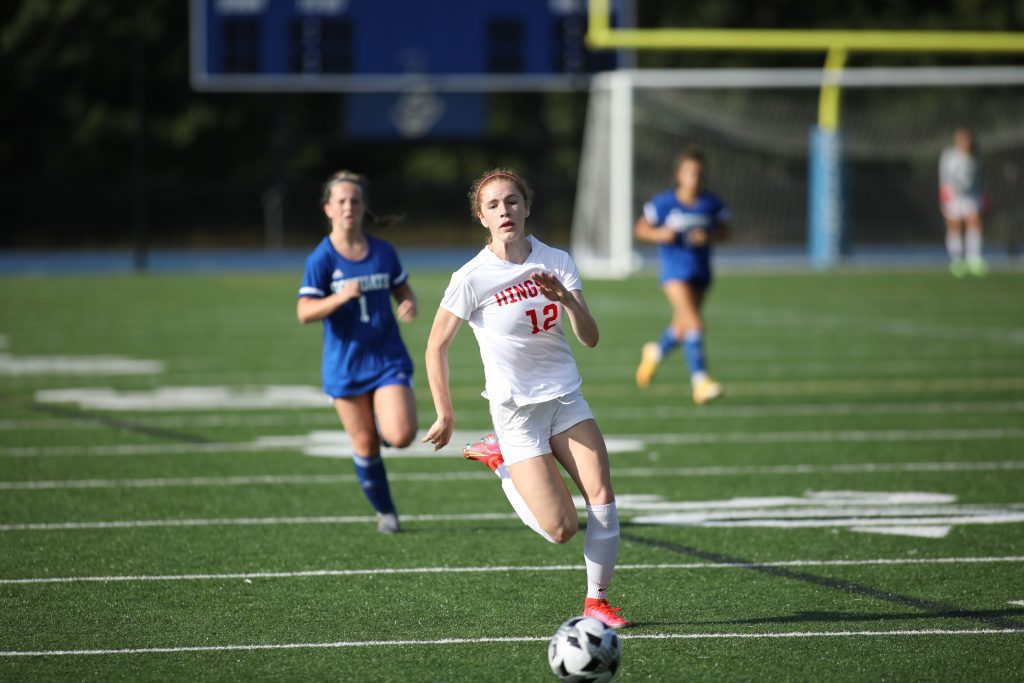 Sophomore Claire Murray chases a loose ball down the sidelines. 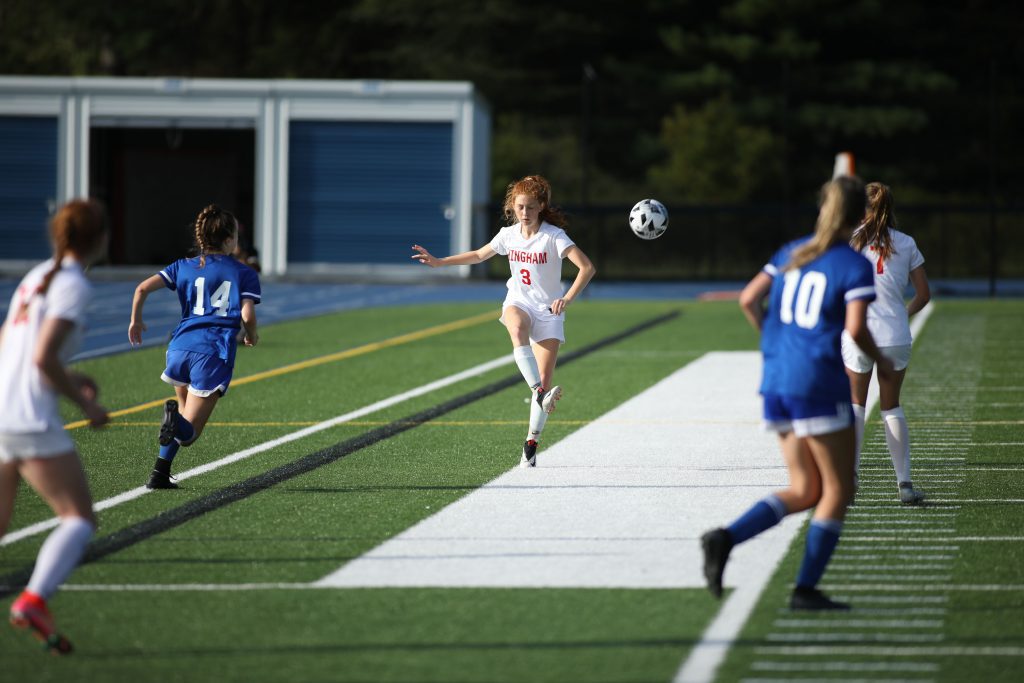 Senior Cara Chiappinelli kicks attempts to find her teammate down the field late in the game. 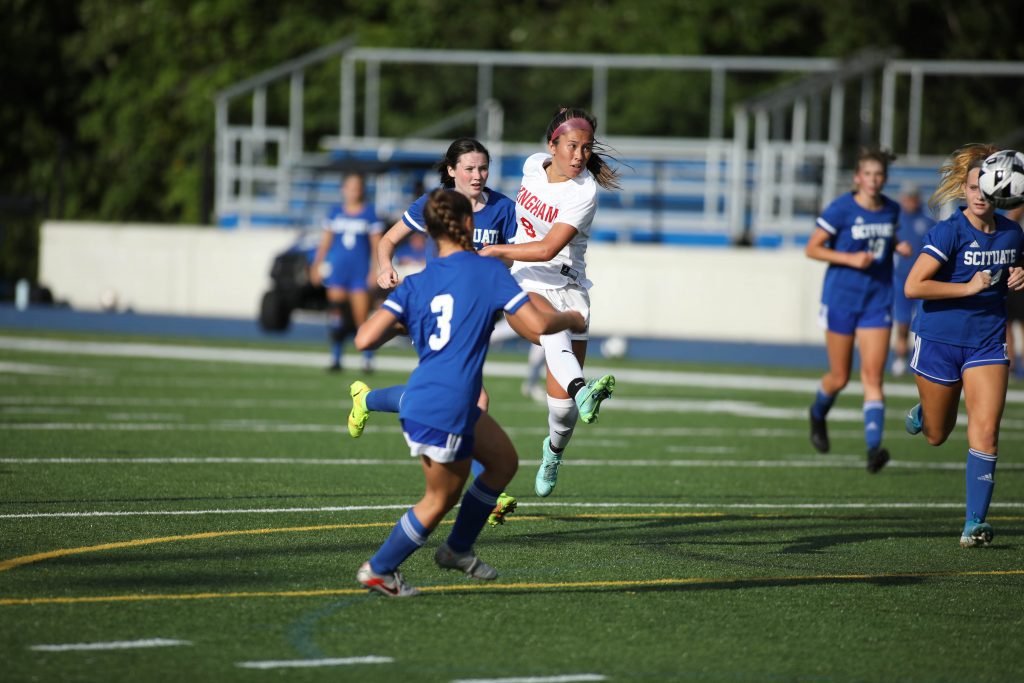 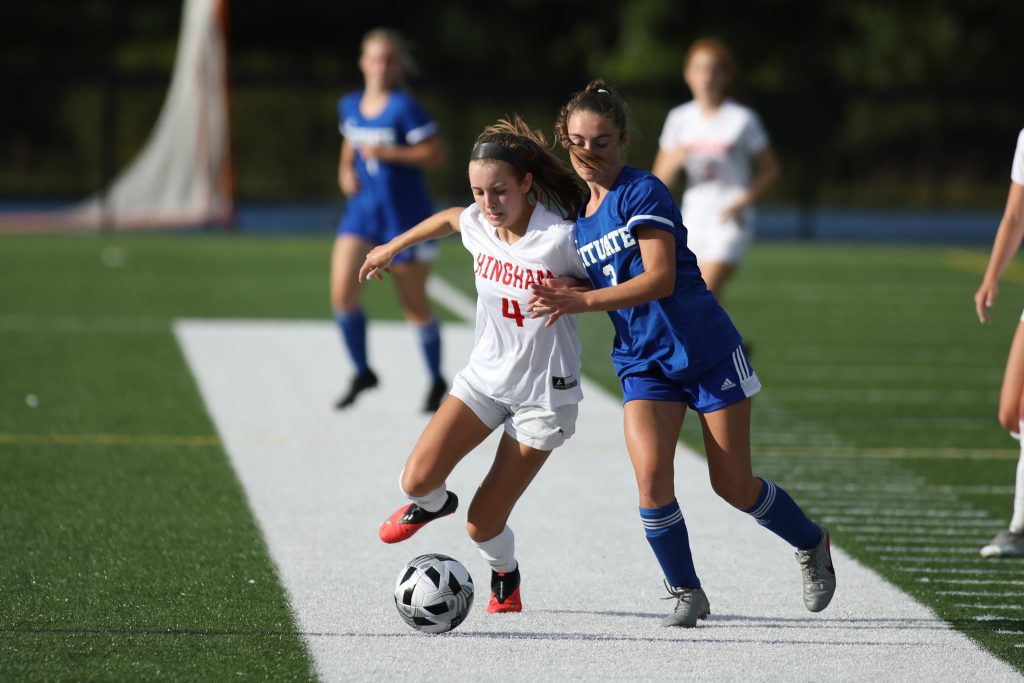 Junior Kelsey Tarby fights to keep the ball from going out of bounds in the second half.