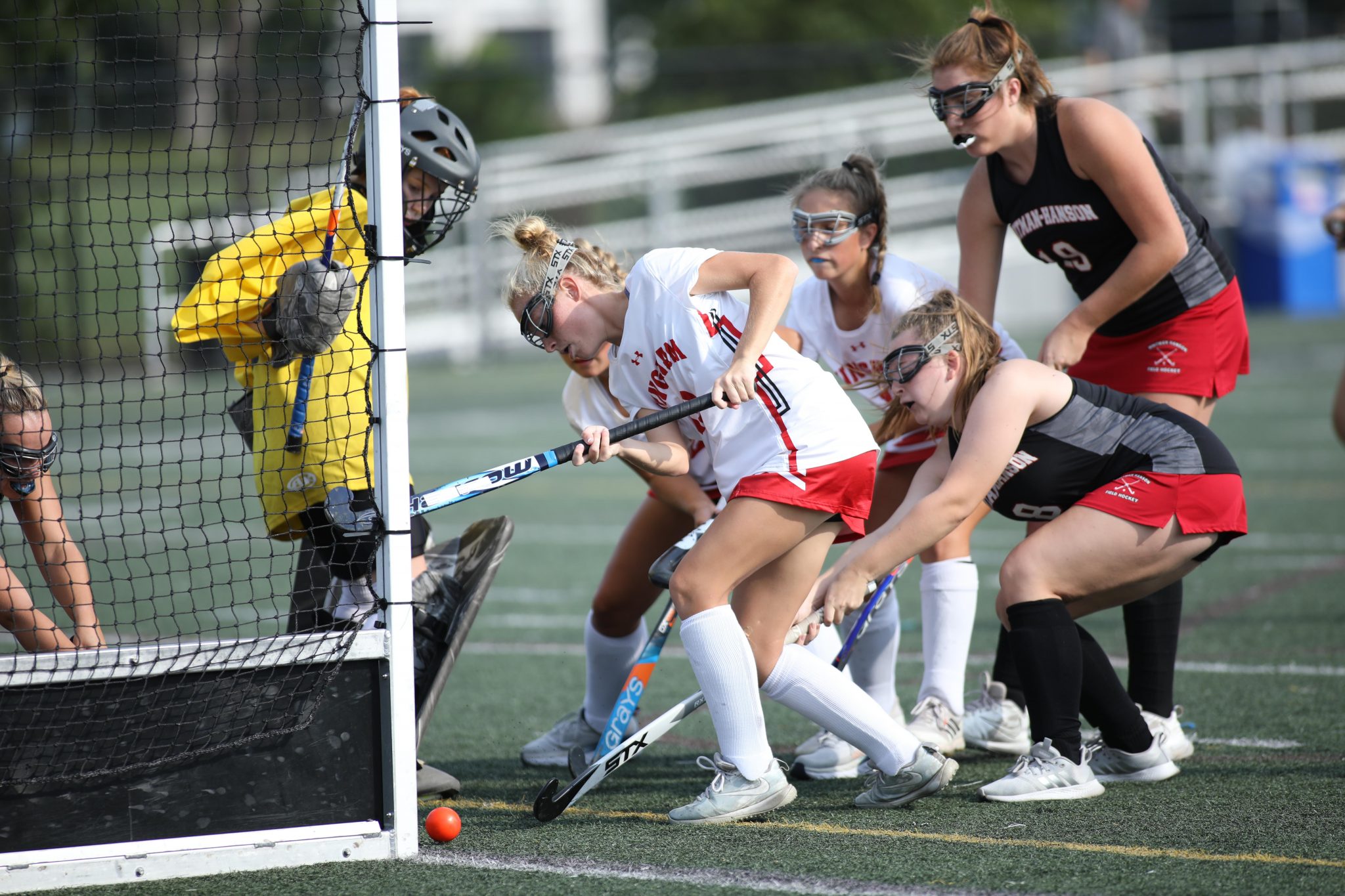 Senior captain Kyle Wilson punches in the first goal of the game vs Whitman-Hanson.

To say the Hingham field hockey team has come out on fire would be an understatement.  They have outscored their opponents 21-3 in their first three games.  The latest being a 5-1 victory over Whitman-Hanson on Wednesday.  The Harborwomen have strong core group of returning starters including senior captains Kyle Wilson, Kenzie Wilson, Shea Berigan,  and Lilly Thrun and juniors Abbey Kennedy and Ellie Savitscus.  Whether it’s going back to 11 players on their field or things just clicking at the right time, the girls have been dominating teams to start their season.

“From day one of the preseason, I don’t know if they were bummed about 7v7 last year, wearing masks, or spending so much time in quarantine,  they came out ready to play - top to bottom, freshmen to seniors,” says head coach Susan Petrie.  “They just have an awesome attitude. They are fighters and have a confidence that shows when they step on the field.  They have the presence out there and the effort and the skill to back it up with, which is really awesome to see.”

In addition to the returning starters, Petrie also has some talented underclassmen that are fitting right in.

“My starting forward line is mostly three year starting varsity players, but I also have two freshman starting and a third freshman who gets a lot of playing time, and a lot of players who are new to varsity,” explains Petrie. “It’s been a seamless transition for all those players.”

As pleased as Coach Petrie has been with her team’s early season success, she know there are still things to work on to make sure the winning continues.

“We are still working on moving the ball as effectively as possible,” she says. “Still learning where our teammates are on the field. Some of these players have been together for a few years.  Kenzie and Kyle (Wilson) have always played next to each other, so they  clearly know where each other’s going to be, but some of the newer players are getting used to their style of play and kind of working around each other and playing to each other’s strengths. We are still a newish team, so that’s something we are working out on the field.”

They look to stretch their win streak to four games when they take on Hanover at home on Tuesday, 9/21 at 4:00pm. 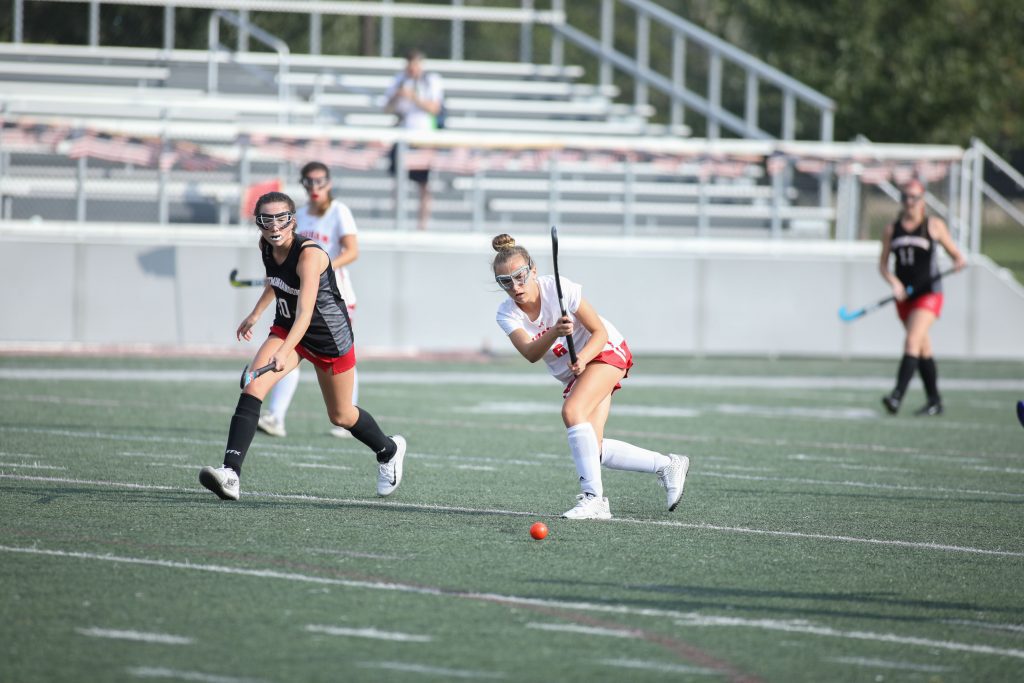 Junior Lily Ehler passes the ball to her teammate on the sideline. 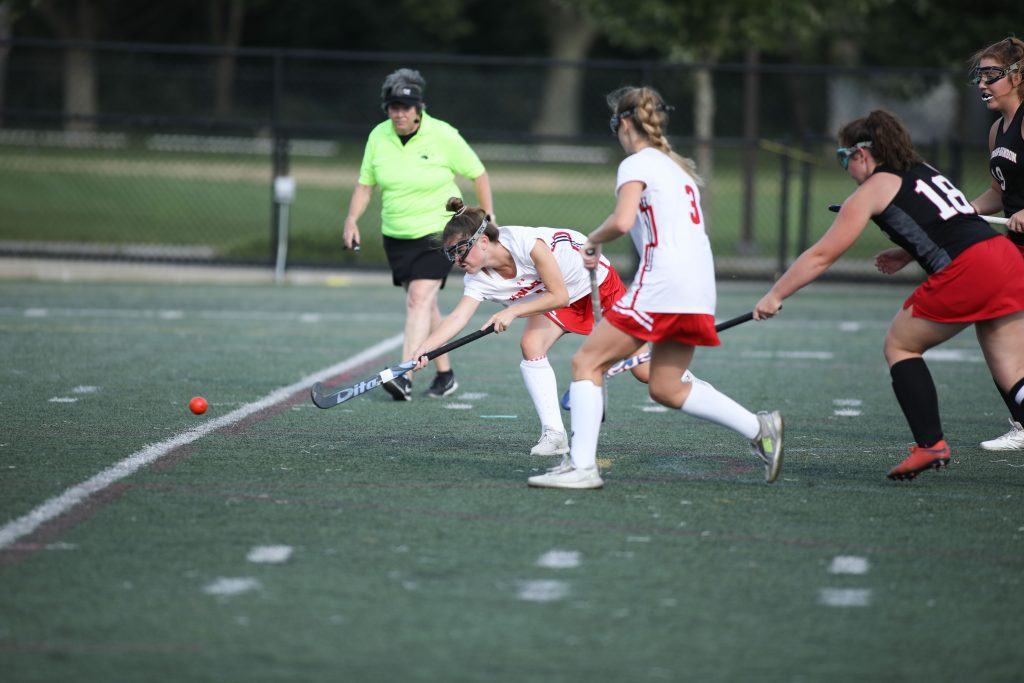 Senior Annie Raso shoots on goal early in the game. 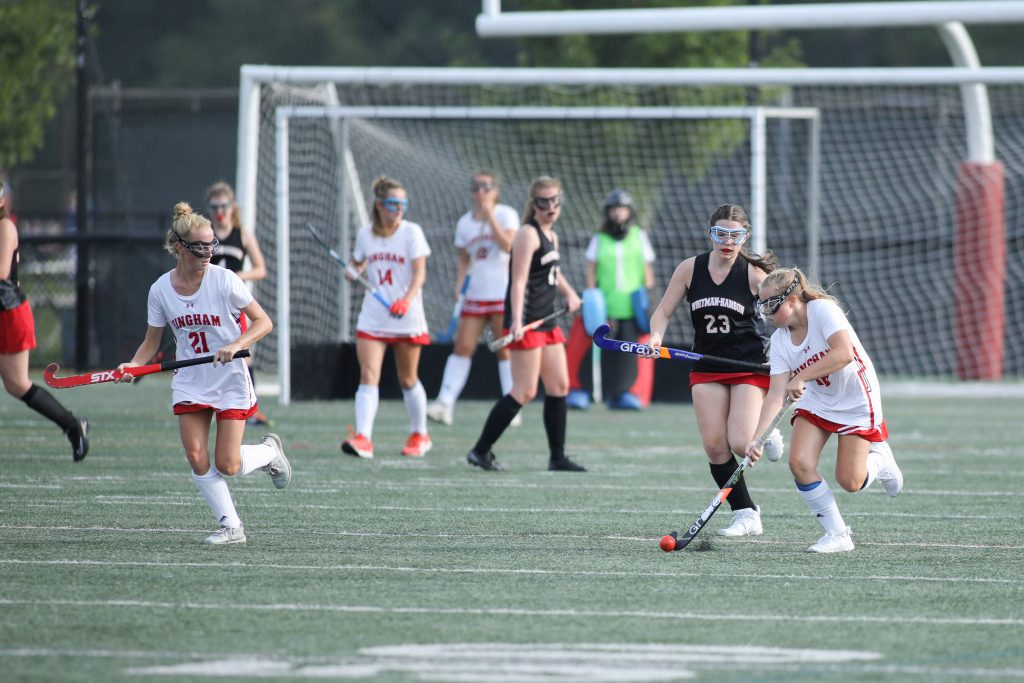 Freshman Haylen Wilson (18) moves the ball up the field with her sister, senior captain Kenzie Wilson 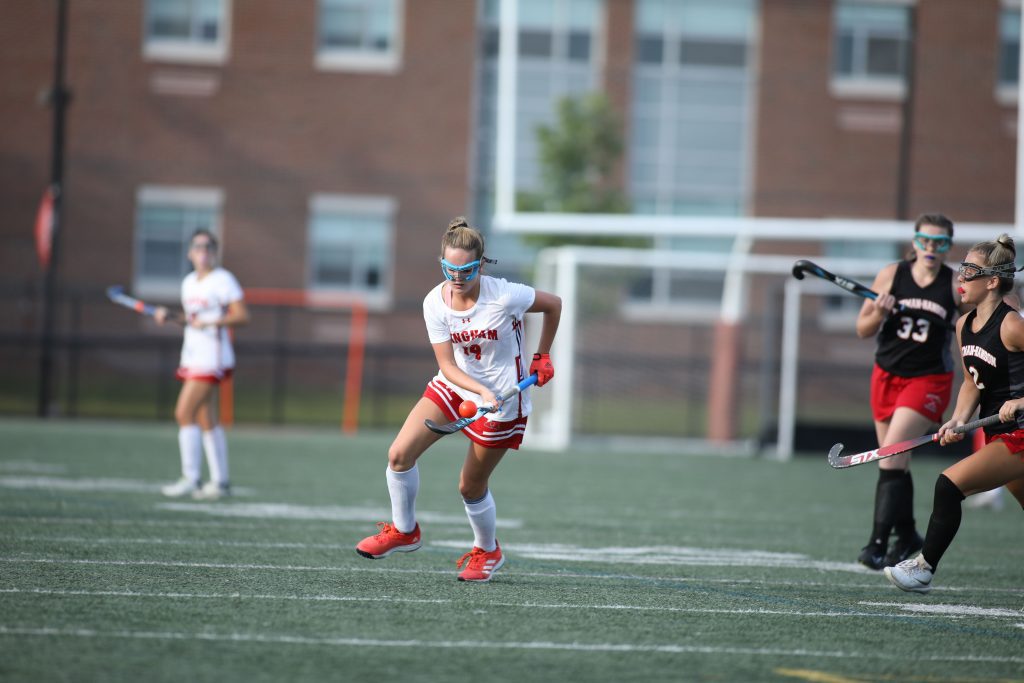 Freshman Sienna Brackett skillfully bounces the ball on her stick as she moves up field. 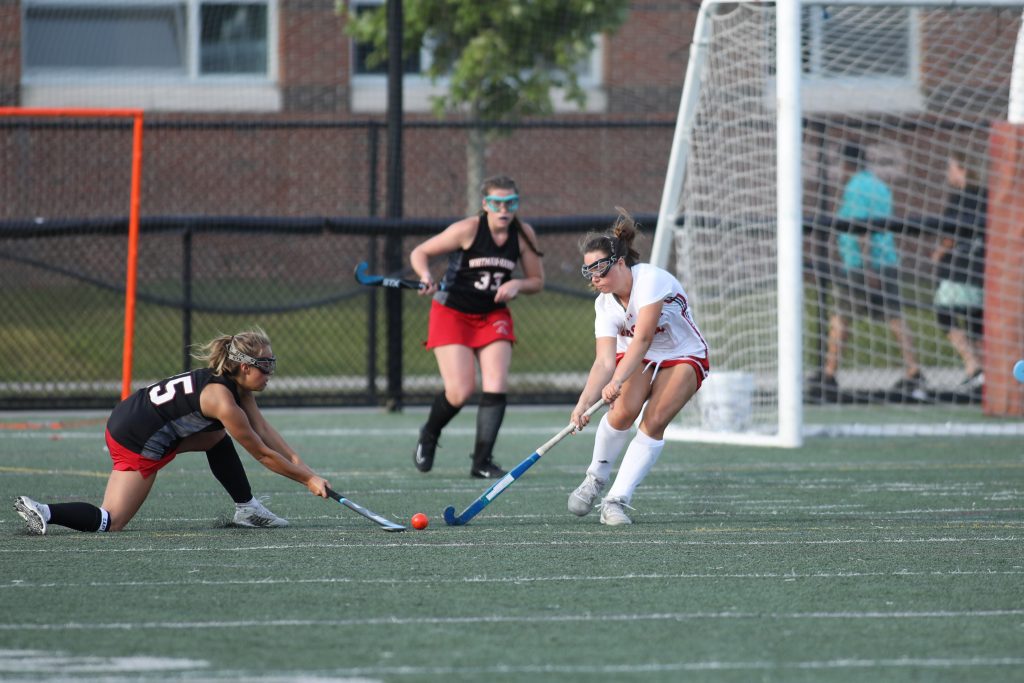 Sophomore Anna Kiernan defends the area in front of her goal. 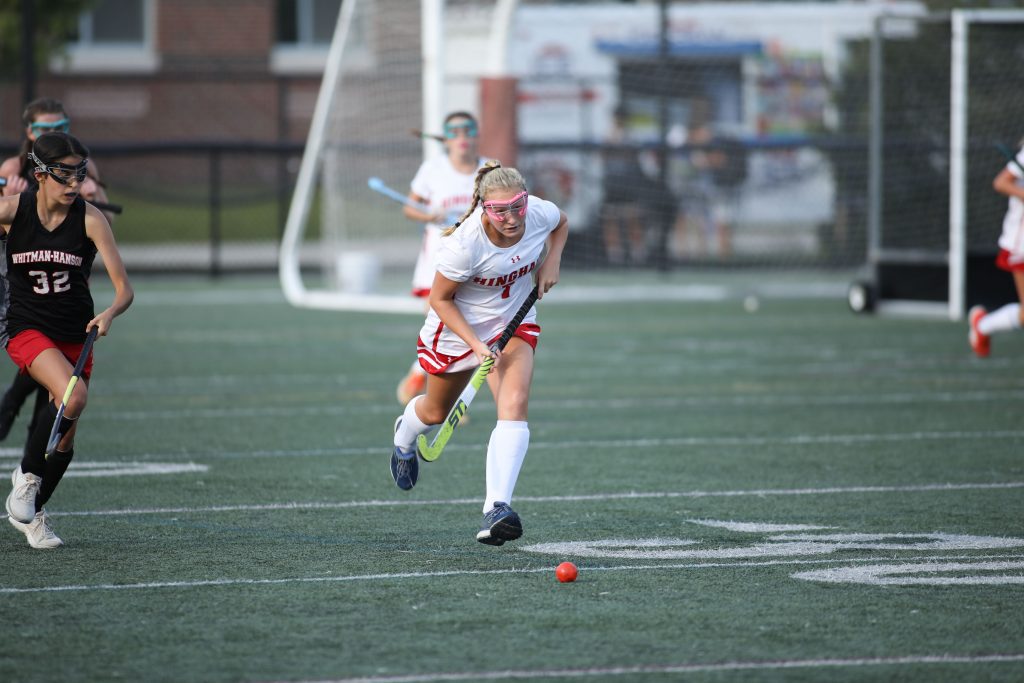 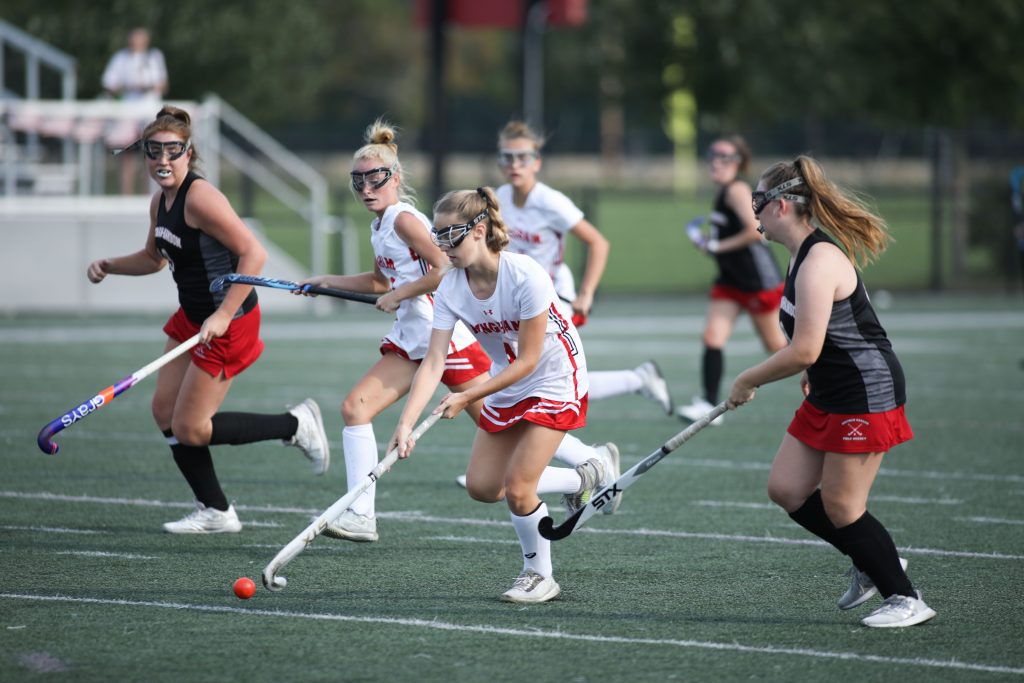 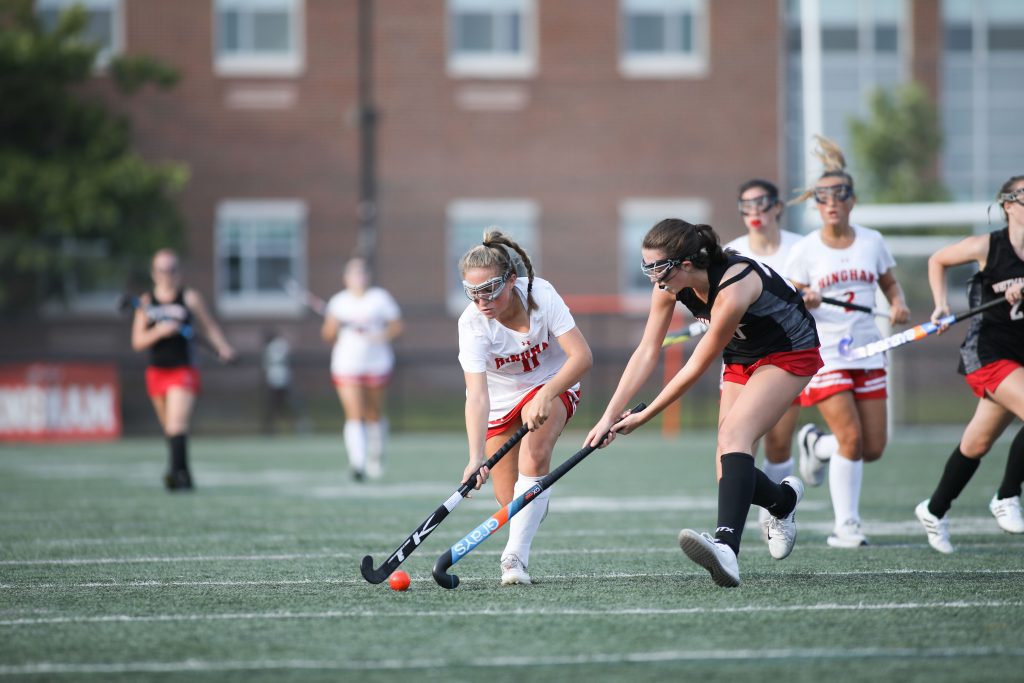 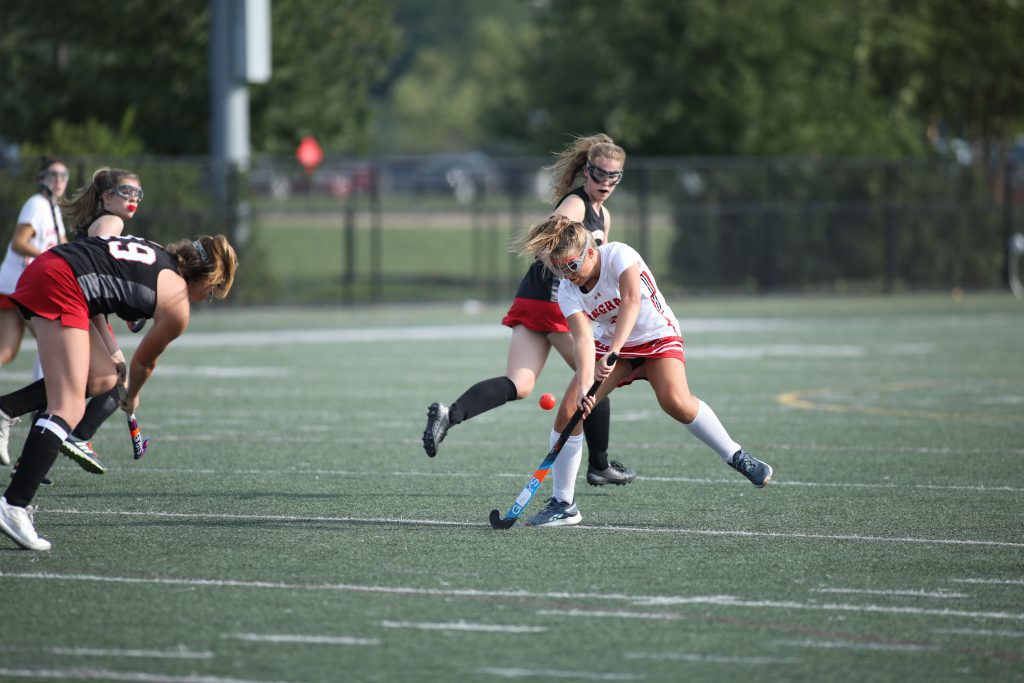 Junior Abbey Kennedy is one of the veteran players on the team.