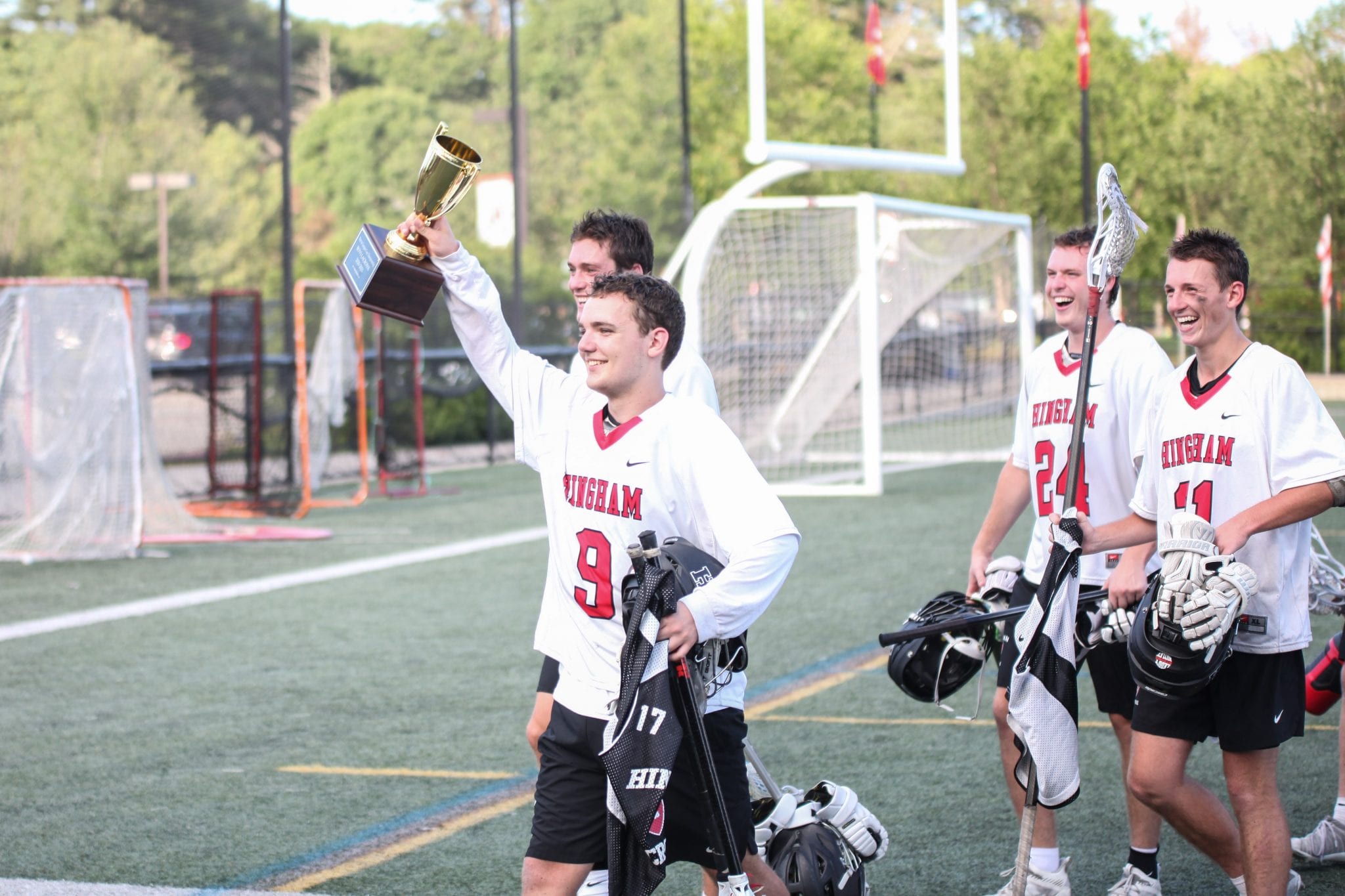 Senior captain and goalie Sam Bellomy leads his team off the field raising the Patriot Cup trophy high in air.

The Hingham Boys Lacrosse team defeated the Duxbury Dragons 11-10 in Tuesday’s finals of the Patriot League Cup. Hingham High was abuzz with action as students organized a “white-out” celebration at the game and families from Duxbury came to cheer on their team. After falling behind early in the first half, Hingham rallied to win in the game that came down to the last second.

The first quarter was very even between the two teams. Despite losing the opening faceoff, Hingham forced a turnover and had two good shot opportunities from Charlie Packard and Lars Osterberg. After a difficult save from Hingham goalie Sam Bellomy, the Harbormen were on the attack again. Owen Hoffman ripped a long shot that went in off the post, putting Hingham up 1-0. Hingham’s student section went crazy at the highlight reel-worthy goal. However, Duxbury immediately responded, controlling the ball off the faceoff and scoring a minute and a half later.

Off the draw win, Hingham’s Osterberg took the ball behind the Duxbury’s net and found Charlie Crean in front of the net for a quick score. Good defense from the Harbormen prevented another Duxbury score, and they took advantage of their possession a few minutes later. Just past halfway through the quarter, Cian Nicholas scored on a snipe from the outer edges of the offensive zone, putting the Harbormen up 3-1.

However, Duxbury bounced back, scoring one goal 20 seconds later and another a minute after. Despite this, Hingham reacted to the pressure and almost exclusively controlled possession until the end of the quarter. Offensive opportunities from Connor Hartman, Charlie Crean, Henry Crean, and Charlie Packard kept the Dragons on their toes until the horn.

Although Hingham had the momentum at the end of the first quarter, Duxbury exploded in the second half. The Dragons won two faceoffs in a row, scoring both within the first two minutes of the quarter. The next five minutes were nail-biting for Hingham fans. Duxbury held possession and had great offensive looks but Hingham’s Bellomy was steadfast in net. Duxbury finally scored 5 minutes later on a turnaround shot by Ryan Nagle, lengthening their lead to three.

However, Hingham came alive after this goal. The Harbormen scored two before the end of the half, thanks to Charlie Crean and a personal foul call with just one minute left in the quarter. Hingham was down by just one at the end of the half, but they certainly turned on the heat in the second half.

A Duxbury faceoff win and turnover gave the Harbormen the ball in the offensive zone. Owen Hoffman just barely missed on a long shot, but the Harbormen retained possession for the tying score just a minute and a half into the quarter. Duxbury gave the ball up on a saved shot and Hingham turned it back up the field for Henry Crean. The junior took a contested shot and skirted along the ground and snuck between the goalie’s legs for the go-ahead goal. Duxbury then controlled possession for a while and scored to tie.

This began a period of no offense for both teams, with several turnovers. Hingham finally secured the ball and once again scored to lead the game. A pass found Hoffman within the slot, and the junior split defenders to take the low shot. Three minutes later, a man advantage penalty against Duxbury gave Charlie Packard an opportunity on the outside. With under 30 seconds left, he sniped the net and had Hingham fans on their feet. However, it was his celebration that had Hingham fans cheering the loudest, a picture that would circle social media for several days after the game.

Despite a last-minute push from the Dragons, Hingham maintained a stalwart defense to close out the game. Duxbury tied the game with under 6 minutes left, but was instantly nullified by the Harbormen who took the 10-9 lead. Hingham then had a clutch defensive performance despite a penalty and forced a turnover. This gave Hingham a long possession where they ran down the clock and scored. However, their two-goal lead was not safe. Duxbury scored on transition with just 25 seconds left, cutting the lead to one.

The Dragons won the resulting faceoff and threatened to score. A personal foul on Hingham gave Duxbury the ball with just two seconds left in the game as the whole field held its breath. A desperate shot by Duxbury bounced just in front of Bellomy as the goalie positioned himself to deflect the ball and make the save as the horn sounded. Hingham won the game 11-10, and the stands came alive with cheers as students and parents leaped to their feet.

The Harbormen tossed their sticks and helmets into the air in celebration before posing for the trophy presentation. Bellomy accepted the trophy for the team and players jumped onto the bleachers to share the moment with their friends. This key victory was well commemorated by Hingham students, whose main rivals is Duxbury. The team gathered in the center of the field for photos to memorialize the moment that will likely stay with them forever.

Hingham Head Coach John Todd was very thankful for the matchup and his team after the game. “It’s never a dull moment when we get together,” he mentioned, “I give them credit and I give our guys a ton of credit too.” Todd was proud of the way his team held it together in the second quarter and didn’t force any bad shots to make up for the loss. “Great rivalry, great competition, great lacrosse, and that’s what it’s all about,” he summarized about the championship win. 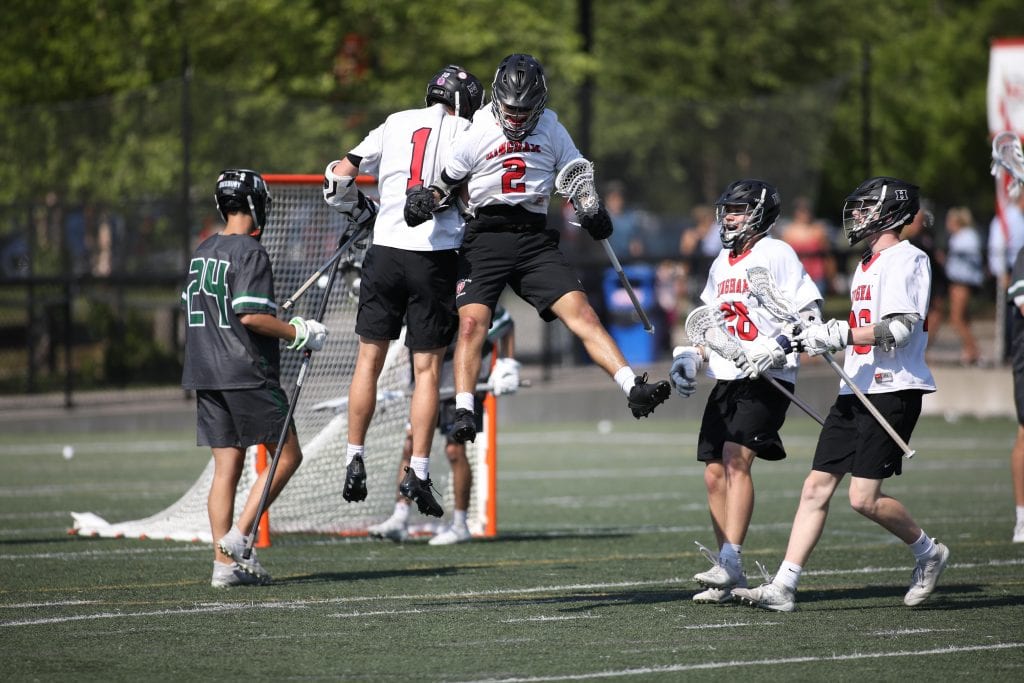 Junior Cian Nicholas (2) celebrates his goal in the first quarter. 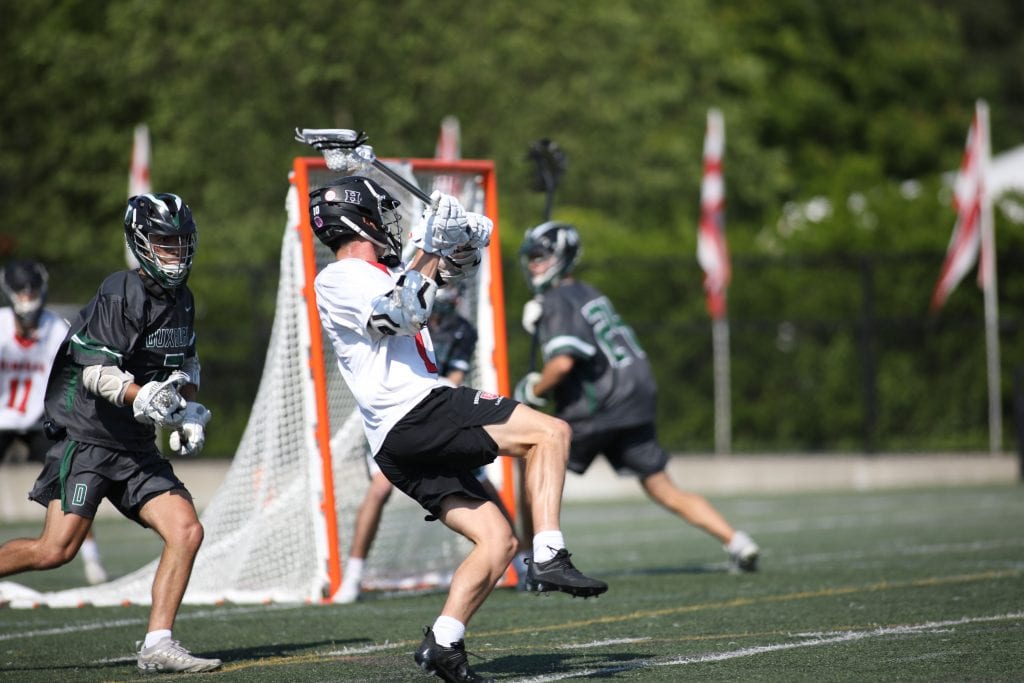 Senior captain Charlie Crean gets a shot off early in the game. 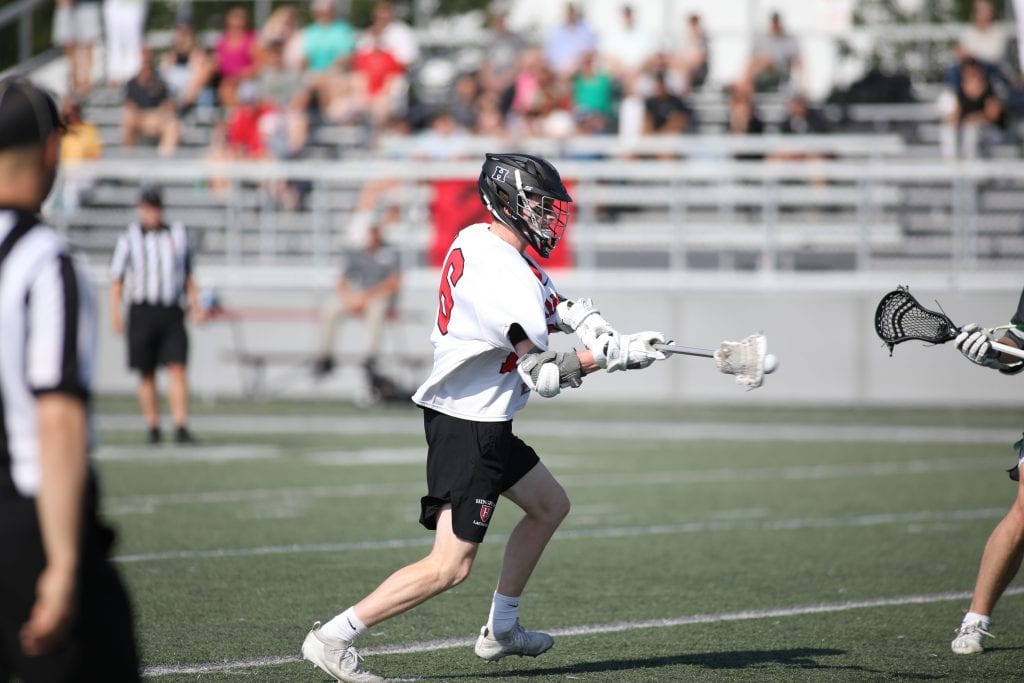 Junior Owen Hoffman with one of his two goals in the game. 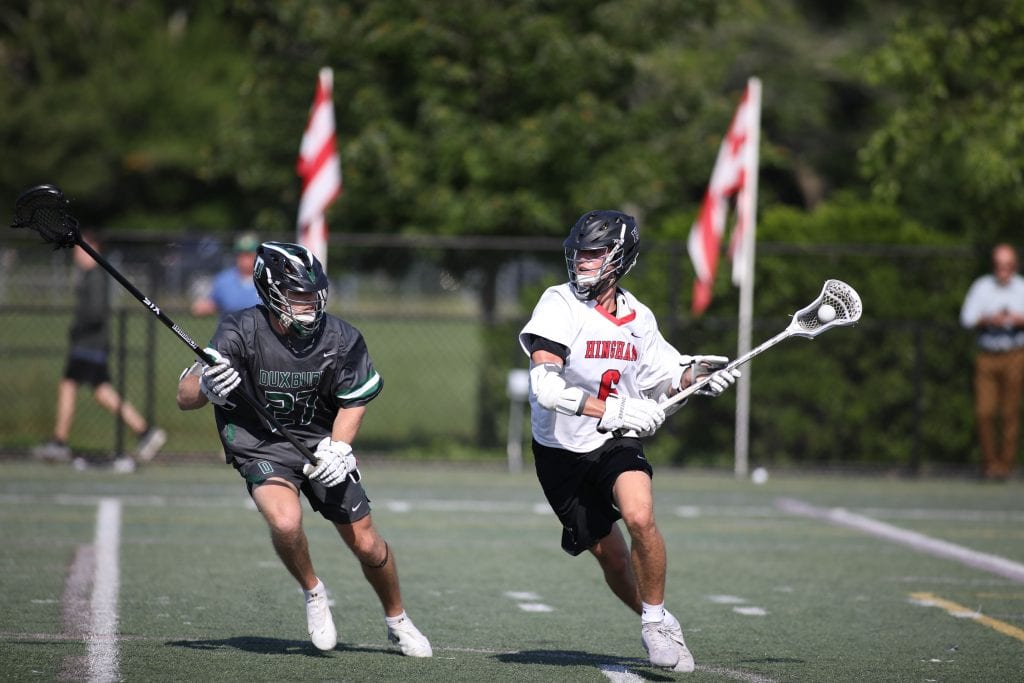 Senior captain Paul Forbes sneaks around the net and scores with seconds left in the first half. 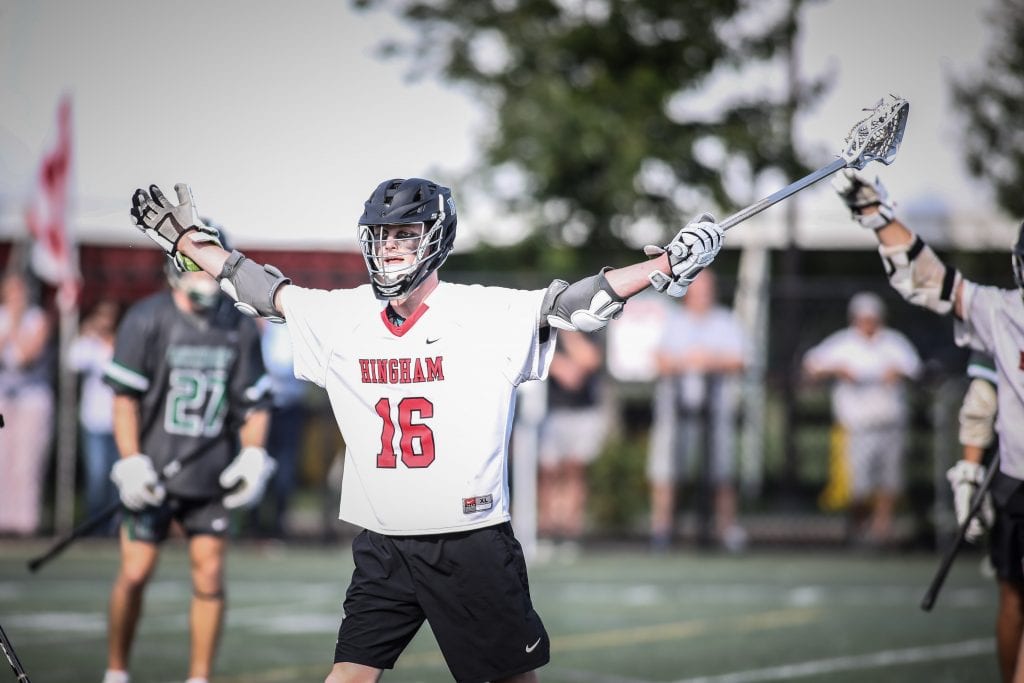 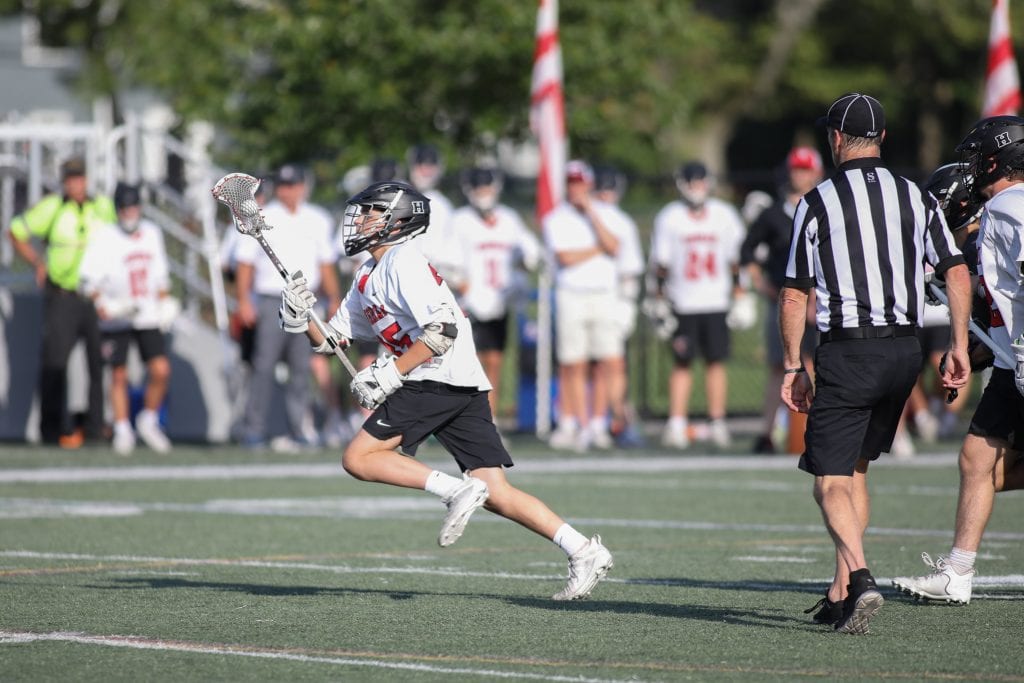 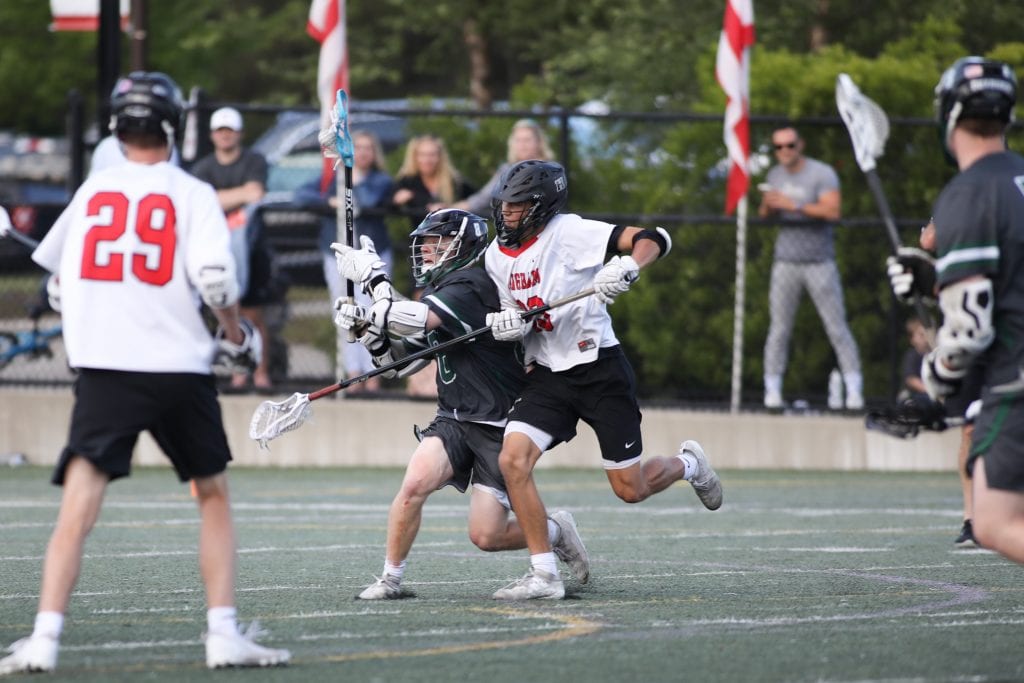 Junior Owen Hoffman with great defense in the final seconds of the game. 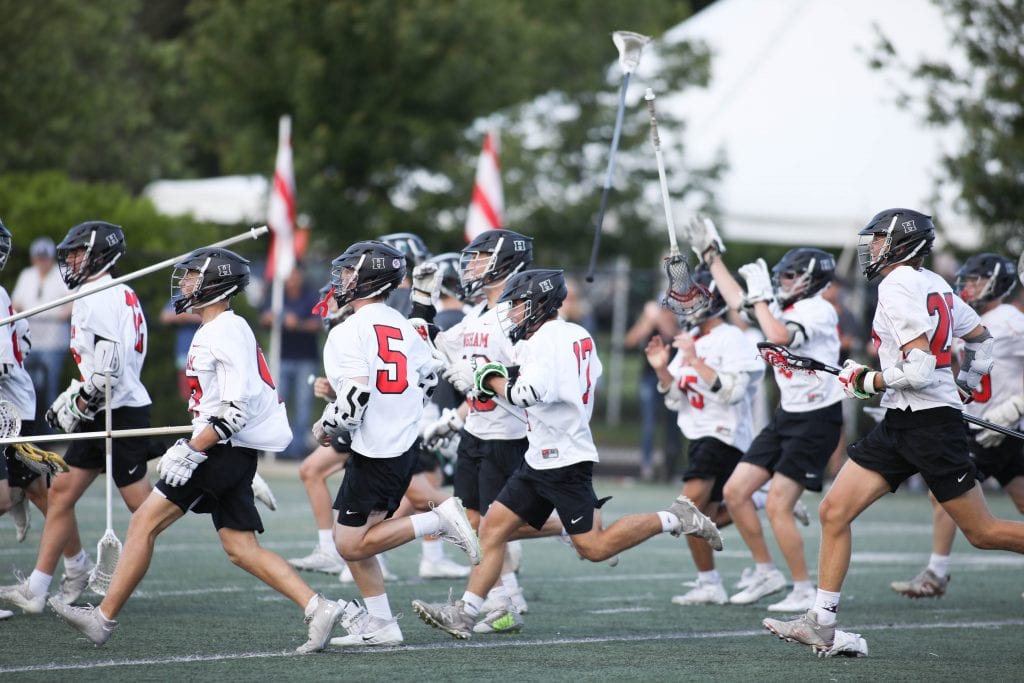 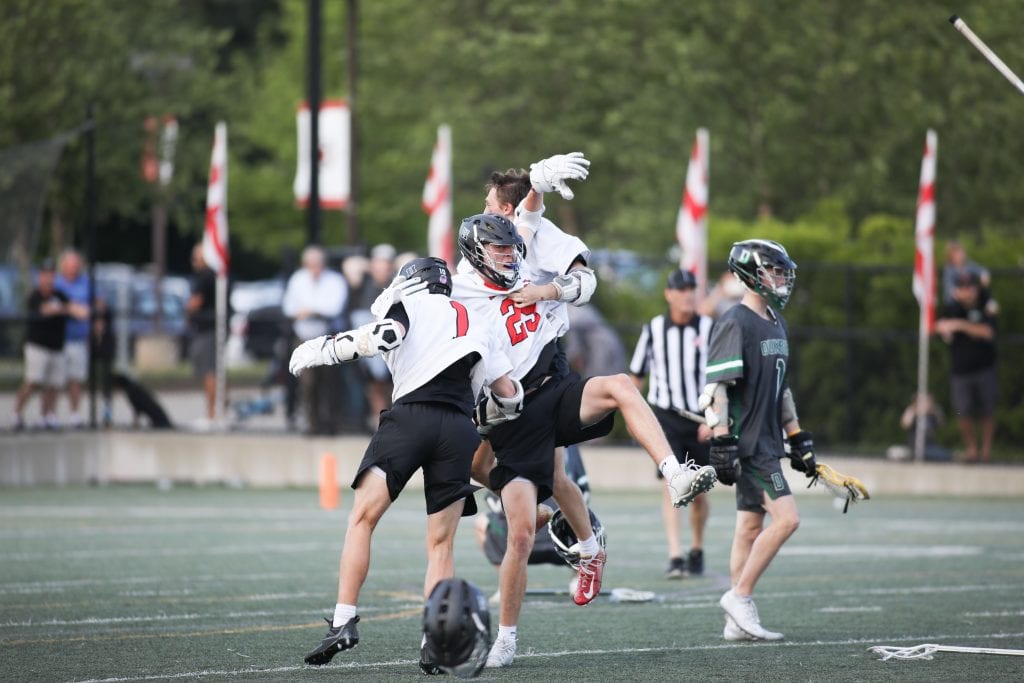 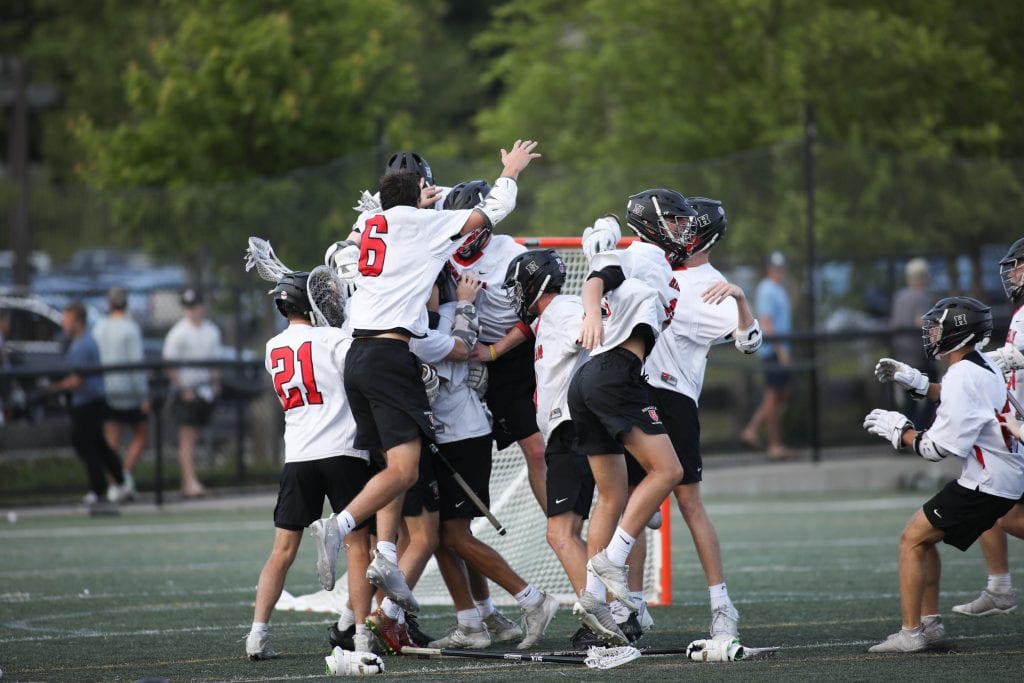 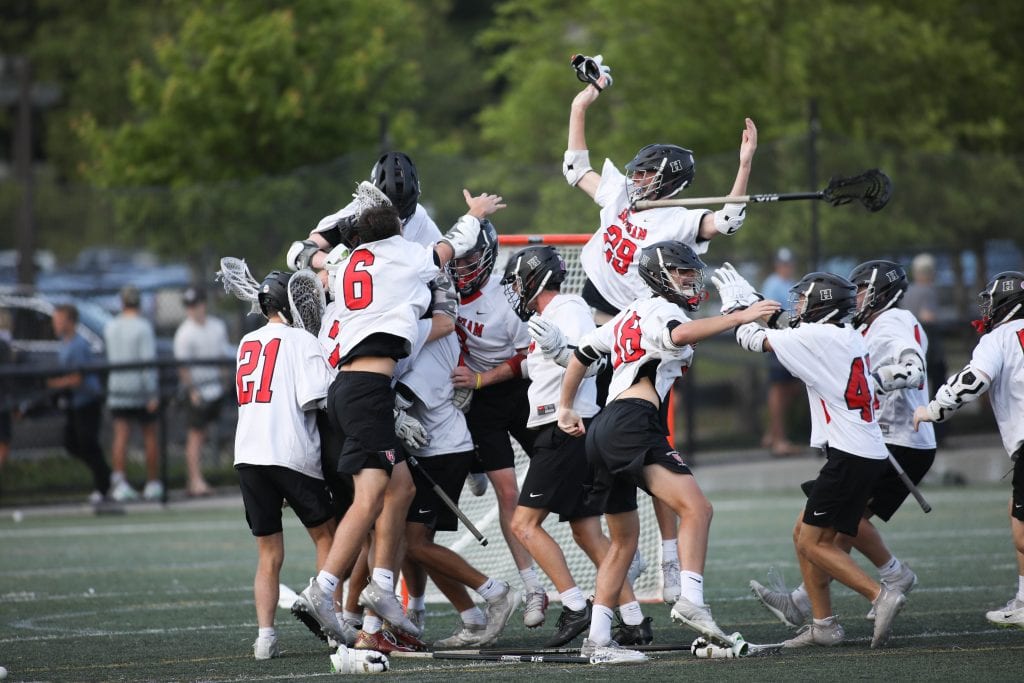 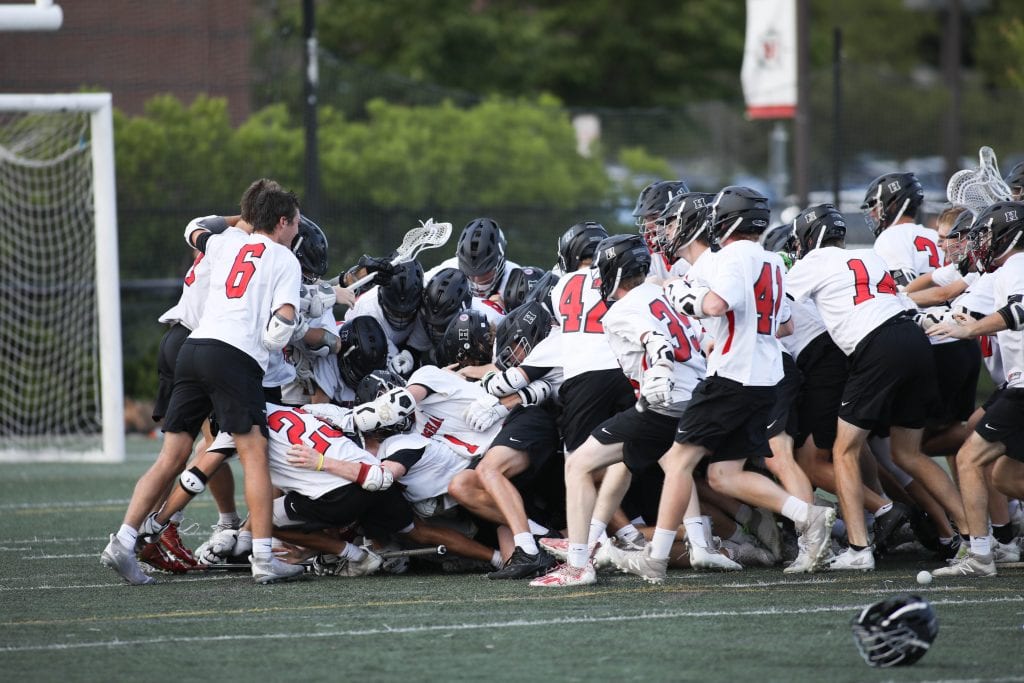 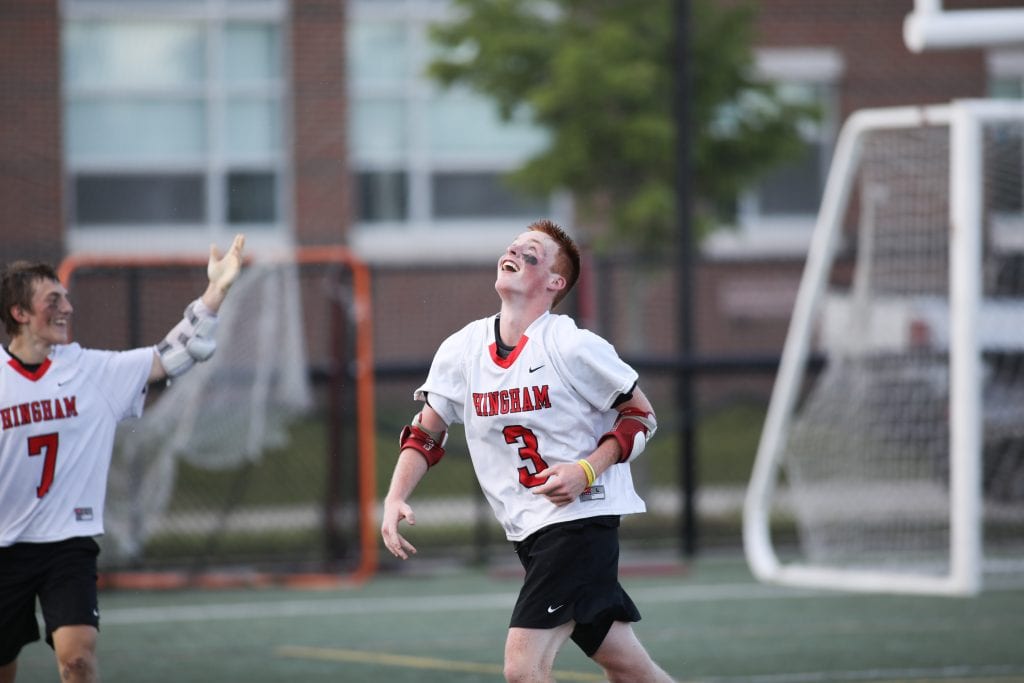 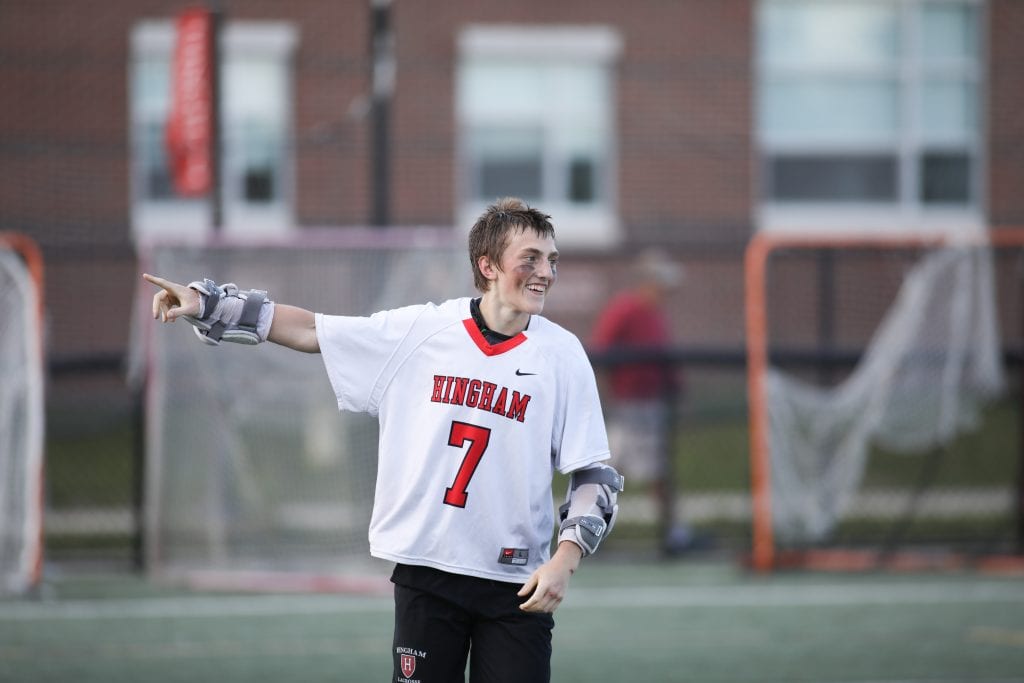 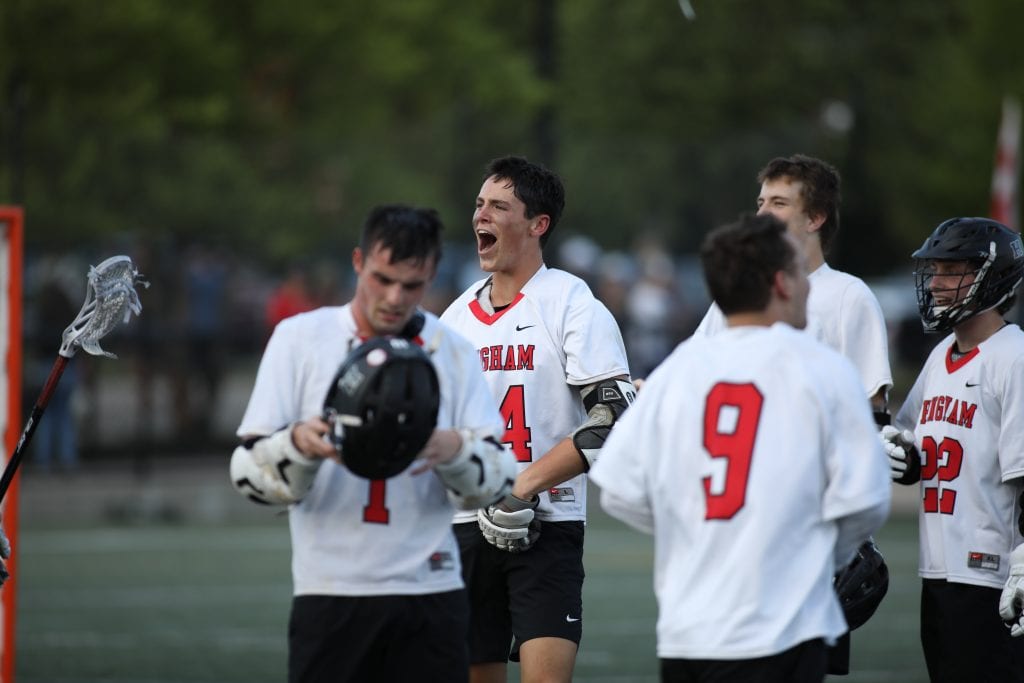 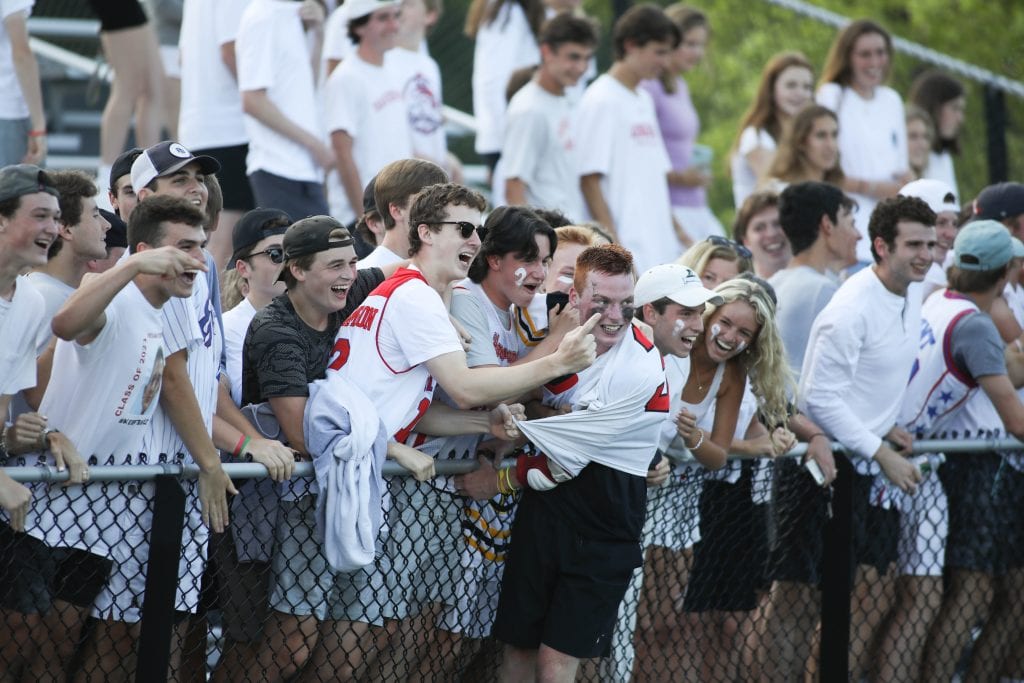 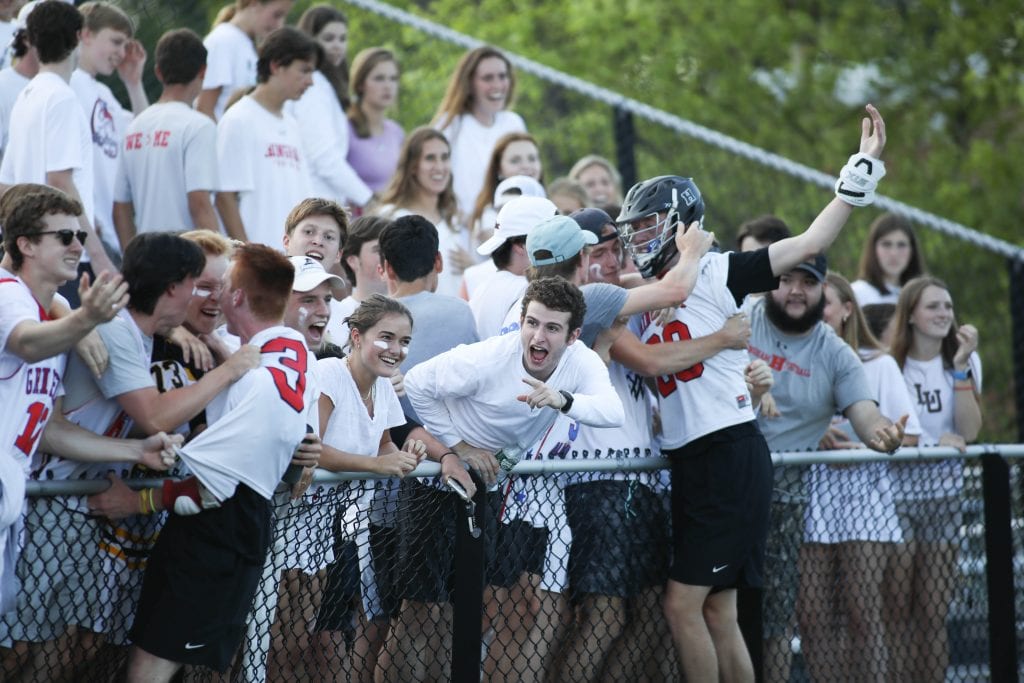 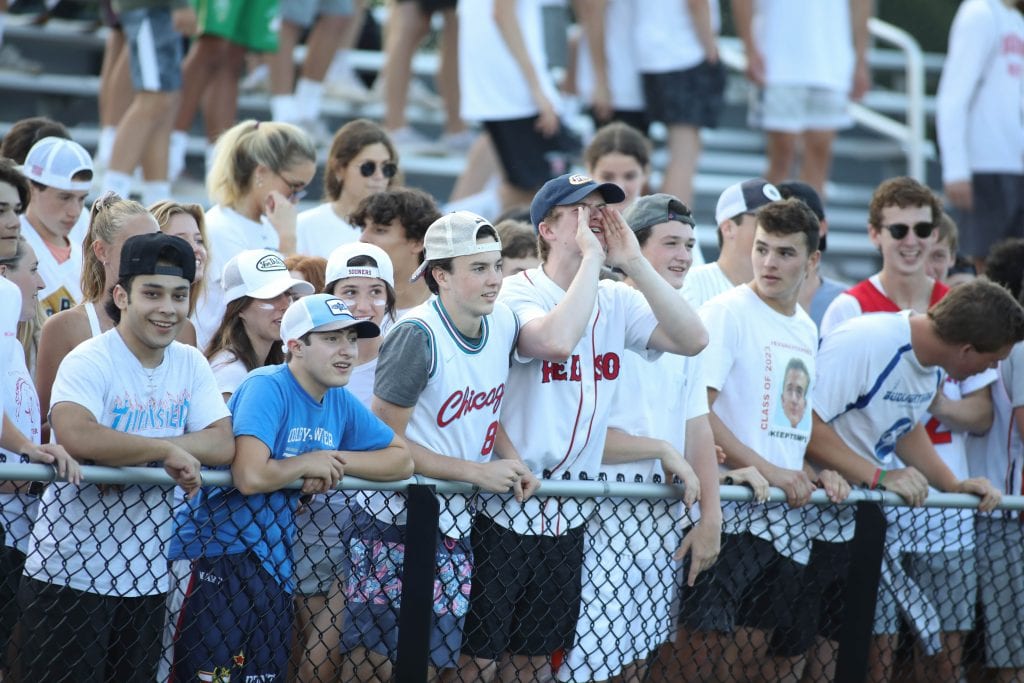 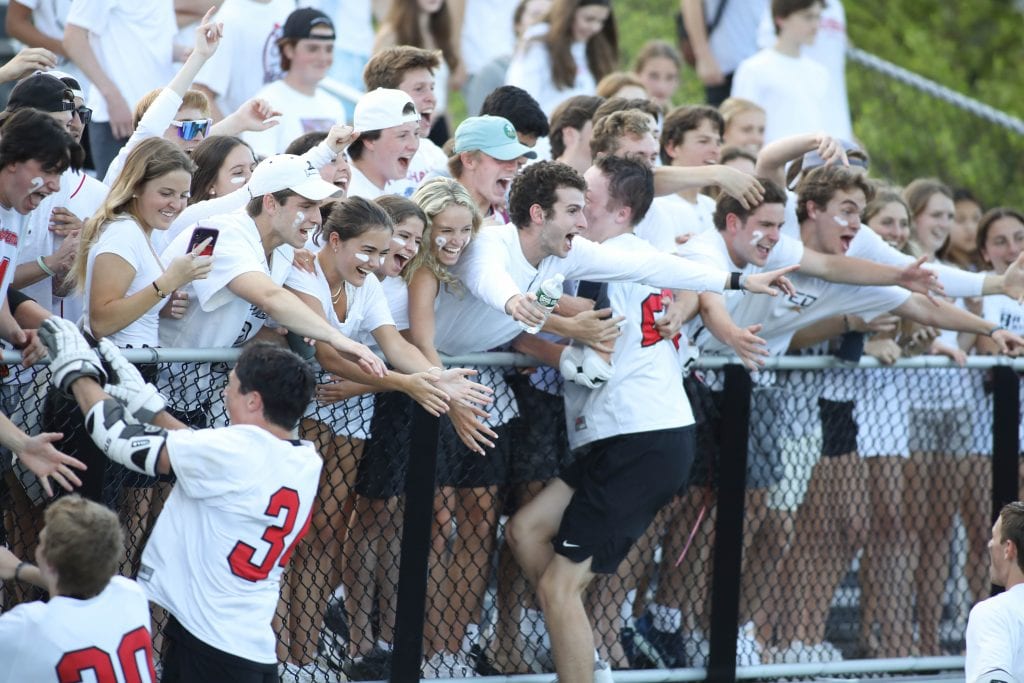 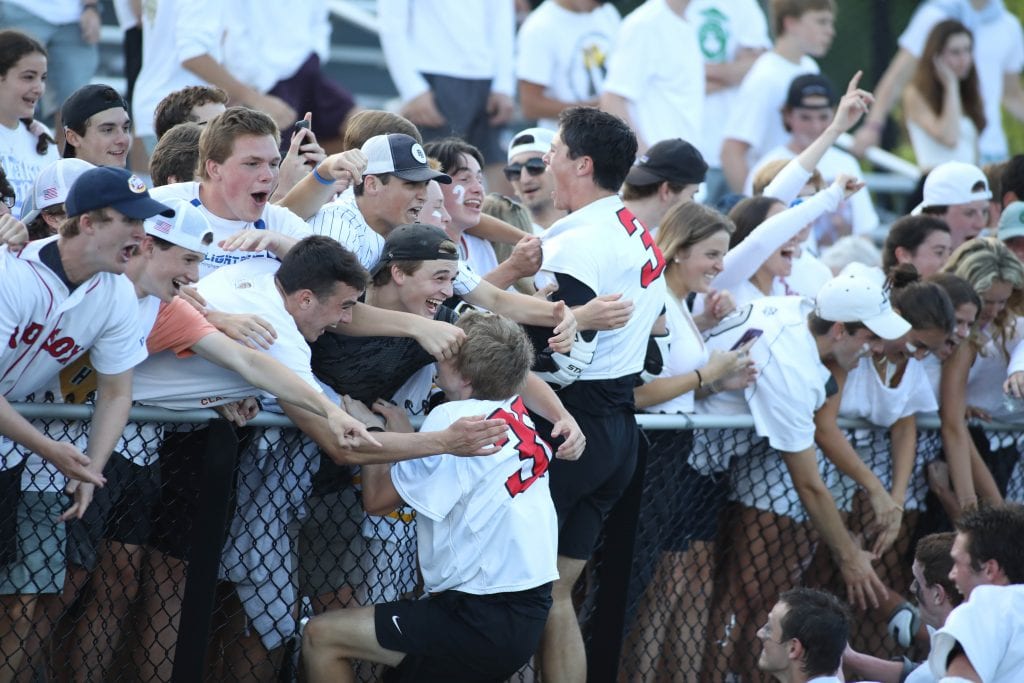 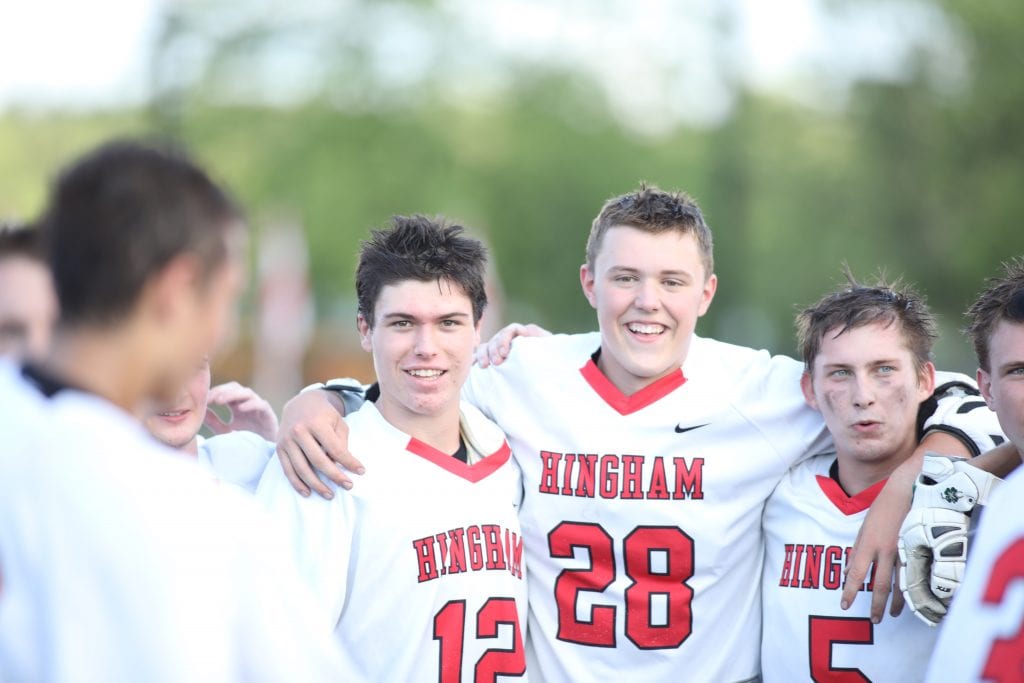 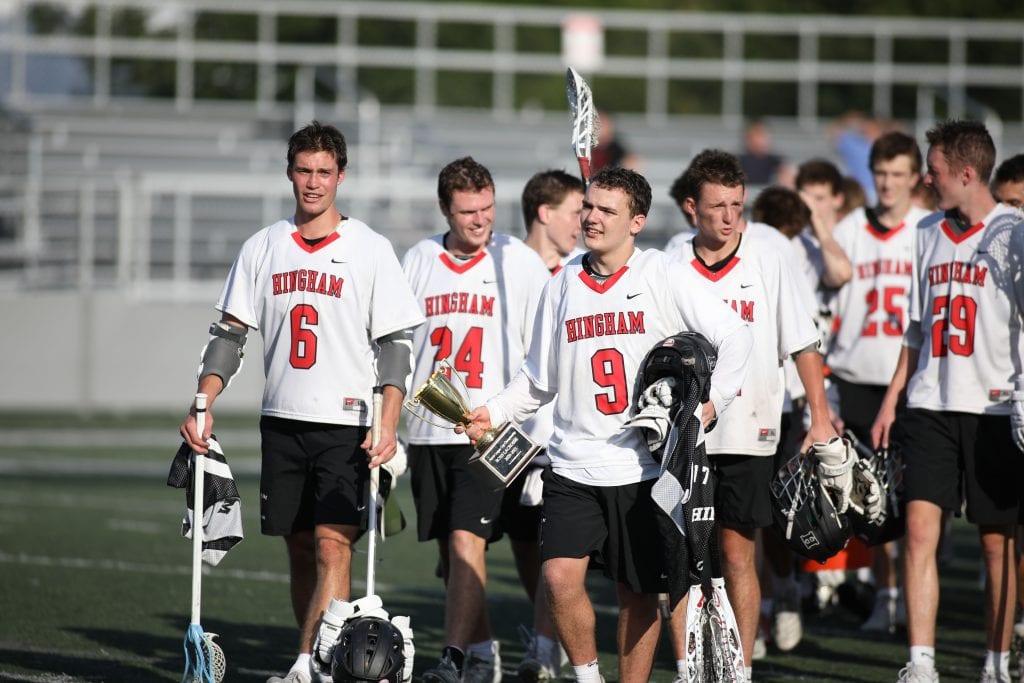