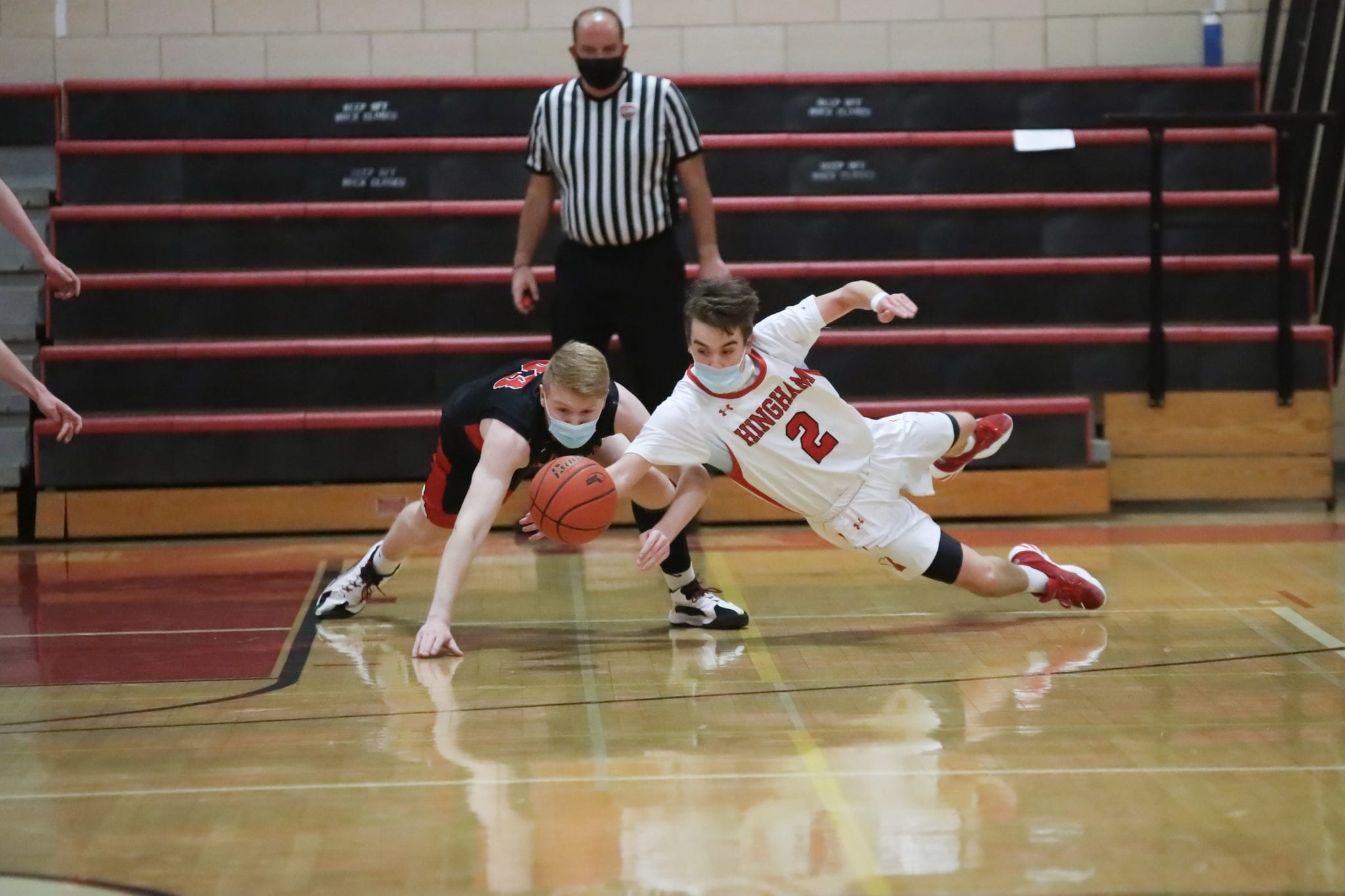 With hours left to go before playoffs kick off for four Hingham High School teams, the girls hockey team finished up their last make-up game against Norwell Thursday night with a convincing 6-1 win.  The boys and girls basketball teams finished up their seasons on Wednesday night as the boys bounced back with a dominant 69-45 win over Marshfield, while the girls lost a close, offensively challenged game against Plymouth North 40-37.  Boys hockey wrapped up their season this past weekend against Marshfield with a 3-1 victory.

The Harbormen finished the season with an 11-0 record and the top seed in the Keenan division.  This was first time in decades that Hingham played in the Patriot league for boys hockey and they took full advantage of it.  While some games were more competitive than others, playing against some of your South Shore rivals multiple times a season always generates entertaining games.  The Harbormen got contributions up and down the line-up this year.  Their top scorers of senior captain Paul Forbes, senior Evan Corbett, and sophomore Aidan Brazel were no surprise, but scoring also came from the defense, including senior captain Ronan Mulkerrin and junior Bobby Falvey, as well as having 5 players who scored their first career goals this season.

“I think we had a very successful regular season and I think everyone on our team stepped up and did their job,” Forbes tells the Anchor. “Every single kid on our team competed every practice and for that reason we were able to get better everyday. We were able to have one of the first undefeated seasons in Hingham Harbormen history but we still have a lot to prove.  It was definitely a strange season because of COVID, but we made the most of it and enjoyed every second we got to spend together as a team. The playoffs will certainly show what type of team we are.”

When asked about what the team is focusing on in order to continue their success into the playoffs, Forbes goes on to say “our team is focusing on playing our systems and not cheating the game. We need to execute our game plan playing fast and physical. One of the most crucial aspects we need to focus on is playing a complete game, not taking any shifts off. Our team is a family of brothers and I know we are going to play for each other and with pride for our town.”

The boys start their chase for the Patriot Cup Saturday vs Hanover in Pembroke at 5pm.

After an improbable post season win against the top seed in the state playoffs last year, the Harborwomen were looking to carry that momentum into this season.  The girls had an up and down start to the season, but found their rhythm half way through the season and finished with a 5-3-3 record.  No better example of this than their rematches agains Duxbury and Notre Dame Academy.  They had lost to both these teams early in the season by a fairly large margin, but managed to tie both very good teams the second time around.  Coach Findley admits that it took a while to get all the pieces in place the first half of the season.  The offense of leading goal scorer junior captain Kathryn Karo, junior Ryan Maguire, and sophomore Abbey Kennedy along with the great defense of senior captain Maddy Decelles, senior Ava Yotts, and sophomore Erin Packard, the team is heading in the right direction.  The goaltending of first year goalie junior Amy Maffei has been a welcome surprise as well.  Plus the much needed impact of freshman Reese Pompeo and 8th grader Caroline Doherty has made a difference in recent weeks.

The girls are the second seed in the Keenan division and will face top seed in the Fisher division, Pembroke Saturday at 2:35pm in Randolph.

The boys had a successful regular season finishing second in their division.  The Harbormen suffered a big loss a few weeks back with the season ending injury of their senior captain Steven White.  They have adjusted without their big man and have managed to finish the season strong, with their only loss to reigning state champs Whitman-Hanson.  It’s hard to single out one or two players throughout this final stretch as the team regularly had 9, 10, or 11 players scoring each game.  Senior captain Jack Hurley, senior Jack McBride, junior Curtis Murphy and junior Nick Johannes seem to score when the team needed it the most.  They are joined by senior Evan Williams and junior John Sula showing up often on the scorers sheet.  By Coach Kniffen’s own account, it has been a true team effort this year and he expects that to continue throughout the playoffs.

Hurley explains how it was important to finish strong and get the second seed.

“We knew we had to win (vs Marshfield) because we would get the bye in the tournament,” he explains.  “It was important to us so we would only have to win 3 more to get to the championship (game).”

He goes to say “we want to keep doing what we are doing.  We’ve had an excellent second half of the season, just pushing the ball and playing good defense.  We have a good team in Hanover we are going against on Friday and we are getting prepared for that.”

Their game is at 6:30pm in Hanover tonight.

The Harbormen had some growing pains in their first 4 games, going just 1-3.  They are coming off a season where they lost 2 league all-stars.  But the girls found their game and righted the ship the second have of the season going 5-1 in the next 6 games before losing against Plymouth North.  The team started to utilize their strengths under the basket with juniors Colleen Johnston and captain Caroline Connelly, who regularly score a ton of points in the paint.  And while junior captain Perry Blasetti can make threes, she has also been taking advantage of the opportunities to drive to the basket more than she did last year.  Senior captain Abbey Foley continues to be a leader her teammates look up to.  As the only senior on team, she has a unique perspective on being in the program for 4 years, which only helps some of the younger players like sophomores Colette Hanney, Ellie Savitscus, and Sarah Holler, all of who have made signification contributions the past few weeks.

Foley reflects on the season and her career as the Harborwomen start their playoff run tonight.

“I think we got off to a slow start but really came together as a team and that started to show more on the court. We are really focusing on moving the ball and playing tougher defense. Overall I think my last season has been memorable and I will definitely miss playing and being part of this team.”

Plymouth South comes to Hingham for their first round match up.  Game starts at 6:30pm.

Unfortunately, the swimming & diving, gymnastics, and skiing teams have finished their seasons and due to COVID restrictions they will not be having any post seasons.