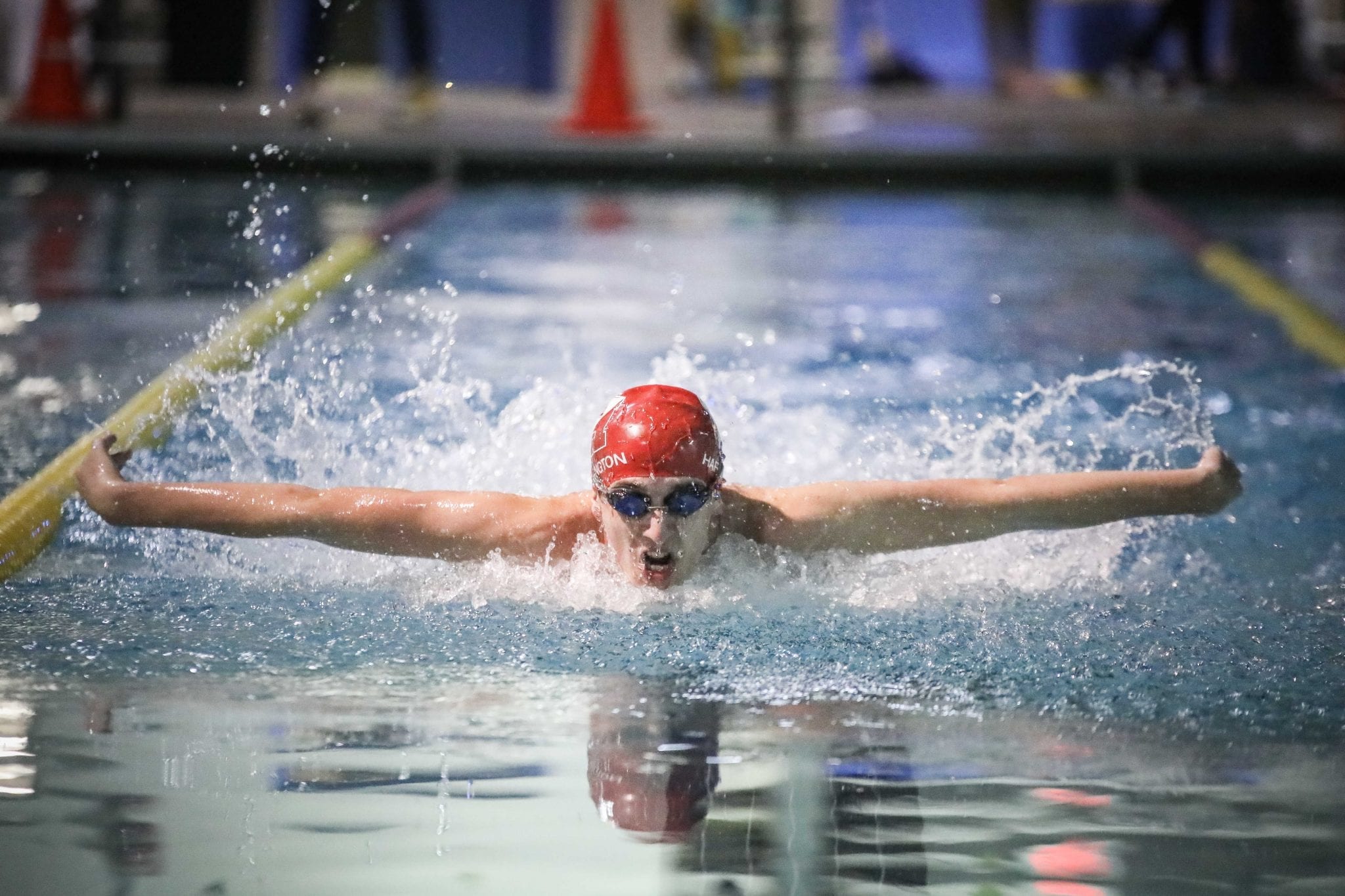 Senior captain PJ Harrington competes in the 100m butterfly during a virtual meet.

There are no spectators, no parents, and no opponents, but each week the boys and girls swim & dive teams take to the pool and compete just like every other season. However, the meets are as real as ever, with a judge and timekeepers joining teammates in cheering the swimmers on. The competing team is at their pool in their town doing the same thing.

So far, pending results from their rivals Duxbury, both boys and girls teams remain undefeated this year. The modifications and challenges they have been experiencing has not impacted their results so far.

“We had great meets vs Silver Lake and Duxbury, many best times,” Head Coach Kait McDonough tells the Anchor. “Although, it would have been very exciting to see some of these races in person, I am really impressed at the camaraderie and support for each other on the team. Lots of encouragement across the board. “

According to most of the swimmers, the most challenging part is not seeing the person you are racing against.

“Racing is a lot different when you can’t see the people you are racing against - there is a whole new mindset we need to put ourselves into.” says senior captain Cate MacDonald.

Senior captain Mary Prosky Gilbert says “the races have looked a lot different different this year to say the least. Although the team does not have the added motivation of racing competing swimmers in-person, we have had the opportunity to race the boys team, giving us some extra competition. I have seen some very impressive swims through the season, assuring me that after this group of graduating seniors is gone, the team will continue to dominate in the patriot league.”

With less people and less heats, the pace of the meets is a bit faster this year, which gives the swimmers less time in between races to rest.

“At the end of every race they have us put our mask in a plastic bag and take a quick warm down lap which we aren’t really use to,” explains senior captain Nolan Doherty.  “But it is a little nice to take that lap because it’s relaxing and gives a little bit of a buffer time in between races.”

Like all teams this year, they’ve had to adapt to situations and rules that they aren’t accustomed to, such as social distancing, virtual racing, and team bonding.  Coach McDonough talks about some of the challenges they’ve had to overcome.

“This is a year like no other. With all the adjustments, Covid protocols and everything else that these kids have missed out on due to the pandemic, it is even more important now that we have a safe and healthy season. It isn’t perfect, but my expectations are for the kids to have an outlet, remain healthy and most importantly have fun!”

When asked about how to keep the kids motivated during these this unusual season, she goes on to say by “focusing on their own personal records and teaching them to race against the clock is definitely a new focus this season with virtual meets. No cheering or whistling makes it tough to get these guys going but reminding them that they are still competing against another team is must.”

Prosky Gilbert adds “the biggest challenge this year during this year was finding ways to bond as a team as pasta parties and group gatherings had to be eliminated. However, we have tried to solve these problems by creating tailgates where swimmers can grab a piece of pizza on their way out.”

Unlike most of the other team sports, there will not be any post season for this team, which impacts the seniors the most.  No sectionals, regionals or states to get end their final year with a bang.  The seniors on the team are taking it in stride though and focusing on other moments to make their final season special.

“We do not have states or sectionals unfortunately this year, which really is the big meet where you hope to go fast and place high for the town,” says Doherty.  “I think it would be really nice to remain undefeated and perhaps even beat Duxbury, we are still waiting on the results but we have a fighting chance!”

MacDonald adds “this year the league is also awarding the top swimmers in each event in place of our usual Patriot League meet so we are aiming to have good representation of Hingham for that!”

“Personally, my goal this season is to make the most of my senior season even with this crazy year, staying motivated to swim fast for both myself and for my team,” states Prosky Gilbert.  “There are no States, Sectionals, or Patriot Leagues this year so the whole team’s goals have shifted significantly. It is now more important to swim fast at every meet as our times are now ranked with all high school teams across the state, giving us some recognition of our hard work this season. My hope for next year is that these swimmers will be able to experience a normal season, making me very thankful for the 4 years I spent on this team.”

Despite it all, the swimmers and coaches remain thankful that they have a season, no matter what it looks like, and will continue to finish strong for the next few weeks.

Senior captain Ian Strehle sums up perfectly “the season has been great so far, and I am glad that we were able to compete in these circumstances.”