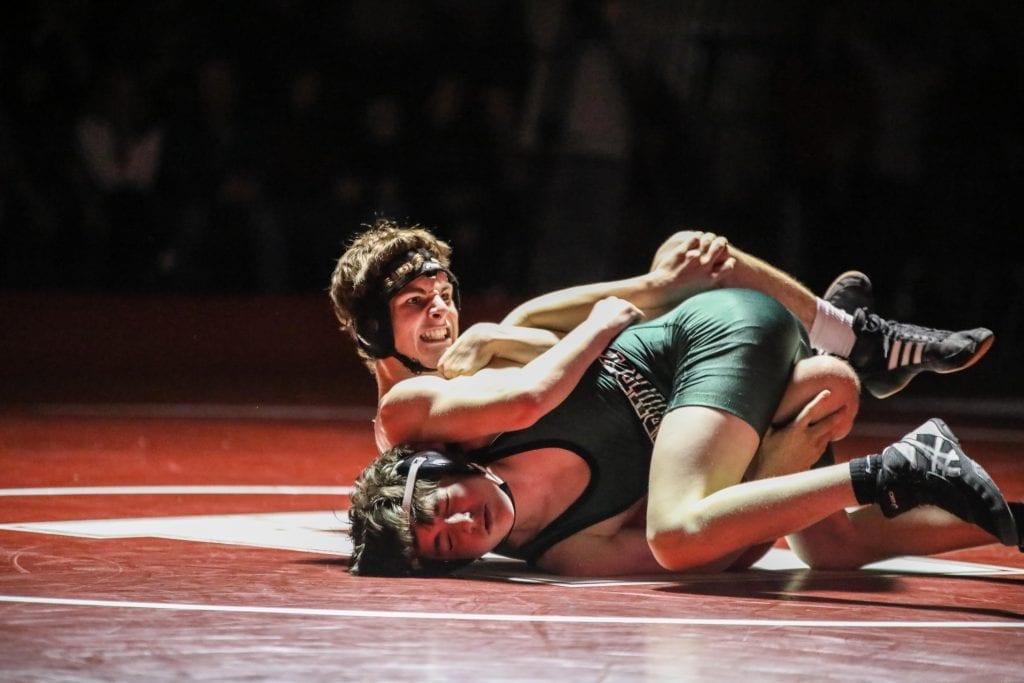 Junior Jack Peterson and the rest of the Hingham Wrestling team look to building on last year's very impressive season this upcoming winter.

For the second year in a row, Hingham High School Athletics has been awarded the Boston Globe's Holmes Award as the most success program in Division 2 in Massachusetts.  The award is given to the program with the highest winning percentage of all of the Varsity games played throughout the year.  Even with last year's spring season not being played, which includes many excellent Hingham teams, the fall and winter Varsity teams pulled off an impressive 70.12 winning percentage. The Globe points out both basketball programs, wrestling, field hockey, and girls Cross Country as the keys to Hingham's accomplishment.

HHS Athletic Director Jim Quatromoni is quick to point out that the success in sports starts with the lessons taught in the classrooms.

"To win this award once is outstanding, to win it in back to back years is just amazing.  Our teachers set a standard of excellence in the classroom that our student-athletes and coaches carry out to the playing fields.  It is a seamless part of our culture," shared Jim Quatromoni, HHS Athletic Director.

"It's a testament to the way the coaches interact with the administration, the parents, the players and other coaches," saysEugene Buczynski, Girls Head Basketball Coach.

In his 23rd year as a coach, he explains that this type of success doesn't happen overnight.  "The growth has been over years of hard work by the coaches, players, and administration to compete at a high-level," Buczynski continued.

The results speak for themselves as Coach Buczynski's teams have a 40-8 record over the past 2 years.

Senior Captain Abbey Foley agrees with her coach's sentiments, "Throughout my four years, I found that the teams are very inviting and that we form a family since day one.  We push each other everyday to become better players and people and I think that's why we have been so successful on and off the court."

Foley and her teammates made it to the Patriot League South Finals last season, one game further than the previous year.  Now as a leader on this team, she hopes to continue their success this upcoming season.  "I'm so excited to spend my last year with the team and coaches."

Girls Cross Country was also identified by the Globe as playing a key part in the great overall record of the school.  Head Coach Todd Deely welcomed the news Sunday night as he and his team gear up for a new season this week.

"It seems like it has be been 6+ months of bad news so it was really exciting to get some positive vibes as we head into what will be a much different season starting Friday," shared Todd Deely,  Cross Country Head Coach.

Cross Country is different than most other sports as there is only one team and everyone competes, no matter grade or ability level.  "The team and coaches are really proud to part of the HHS family and we do our best to represent our school and town both on and off the course," continued Deely.

Hingham High School has an extremely high participation rate for athletics.  76% of students participate in at least one season of high school sports. Most of our comparable districts have around 50%.  But participation rate doesn't automatically mean success on the fields and courts. As Principal Rick Swanson explains, things like inclusion and sportsmanship are just as important as winning percentage.

"We were thrilled to get the news this week that HHS has won the prestigious Holmes Award for the second year in a row," said  Swanson, HHS Principal. "As a former coach, I'm excited about the incredible success our teams enjoyed on the field last year. But as principal, I'm more focused on what this award says about our school culture as a whole. I'm especially proud of the fact that HHS won the Boston Globe's Holmes Award, which measures only winning percentage, in the same year that the MIAA recognized us for excellence in sportsmanship. Even better, the Holmes Award comes just a few weeks after we joined the ranks of "Unified Champion" schools, recognized by Special Olympics for having established a culture of inclusion and respect for all students. Those other awards cut much closer to our school's core values, and it's only in that context where our athletic success finds its real meaning."

"This is truly a community award. We are thankful for the support our community provides to our school district," Quatromoni adds. "Our parents have invested time and energy in helping their sons and daughters pursue their athletic goals. Our coaches work tirelessly to help student-athletes achieve the best versions of themselves.   Most importantly, our athletic department is represented by hard working, committed student-athletes that regularly demonstrate the pride that they have in wearing the red and white."