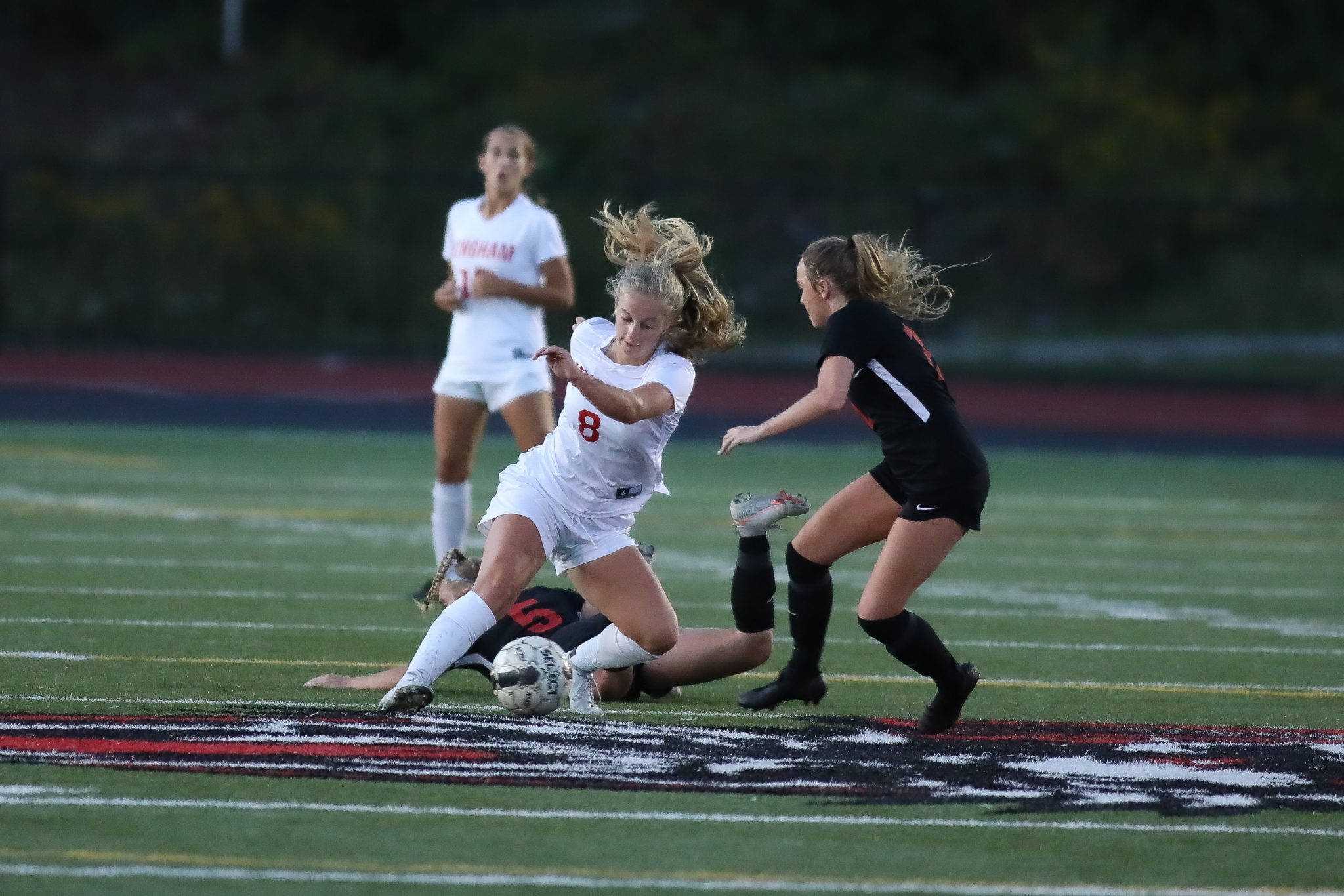 Sometimes reality doesn’t live up to the hype.  Not the case whenever Hingham and Whitman-Hanson meet on the pitch.  Every single game is an entertaining nail biter worth the price of admission.  Last night was no different.

After a close call to open the season against Scituate, the Harborwomen look care of their next three opponents - Pembroke, Marshfield and Silver Lake, quite handedly.  While the players and coaches won’t admit it, this early game was one that was circled on the calendar. This was their fourth game in eight days and if they were tired, there was no evidence of it at the start of the game.

The Panthers struck first in the 8th minute with a great goal off a corner kick that just got between senior goalkeeper Kathryn Wilson and the right goal post.  The early deficit didn’t phase Hingham as they evened it up at 1-1 nine minutes later when junior Emily Gibbons buried an Ava Maguire rebound back past the WH goalie.  Most of the remaining first half was played in the Panther’s end.  Hingham had many chances, including two shots by junior Sophie Reale that drilled the top crossbar and somehow managed to stay out of the net.  Whitman-Hanson, to their credit, weathered the storm and in the 38th minute, scored on a penalty shot called on a questionable takedown in the box by junior Maddie Aughe.

The second half was a little more balanced, but not by much.  Hingham still dictated most of the play, hitting another crossbar and just missing on numerous scoring chases.  Both goalies kept their teams in it the entire game.  The Panther’s freshman keeper made some big time stops on shots from Maguire, Reale, and sophomore Claire Murray.  With time winding down, it seemed that it just wasn’t Hingham’s night.  Then in the 75th minute, Emily Gibbons had a throw in to Reale, who found Maguire at the top of the box, turned and put it in the back of the net, tying the game at two.  It’s somehow fitting and unfair this match ended in a draw, but as history shows, it was not surprising.

“Every game is the same game,” head coach Sarah Dacey said with a smile on her face after the game. “They’re (Whitman-Hanson) just so good.  They’re so good in their transition, and they have some special players.  We have some special players.  I’m just so proud of how our team came back down 1-0 to tie it, down 2-1 to tie it.  I mean that says a lot about our character and about our fight and as a coach it makes me really proud and excited to see what we can do going forward from here.”

While there were definitely some opportunities missed, Dacey credits Whitman-Hanson giving Hingham all they could handle.

“Three crossbars and a couple of sitters in the 18,” Dacey recalls her team’s chances. “They’re just a type of team you can’t take a play off because they’re gonna be coming running at you.  Like I said, their transition is phenomenal and I thought they defended really, really well against us.  I thought our defense, our goalkeeper had an outstanding game. Our back line played really well.  I just thought it was back and forth a bunch. I thought both teams defended well.  They finished their chances.  We finished two really good chances.  We could have had a couple of more, but credit to both teams.  I thought it was a really good high school game.”

On the most important chance of the game, senior captain Ava Maguire made it count.

“It’s all a blur when you are out there,” Maguire tells the Anchor.  “I happen to be at the right spot at the right time. Luckily it was a good run.  Sophie had an amazing ball.  She got to the end line and dribbled it back.  It went directly through those players and I made sure I leaned over the ball, but it went high.  My calf cramped as soon as I shot the ball, but luckily it went right over the goalie.  Literally the best feeling ever."

Maguire and her teammates may have seen some opportunities slip by them during the match, they never thought they were out of it.

"I think our team diversity is so amazing that we know how to hype each other up and really get each other going even when we go down a goal, or even two," explains Maguire. "So that environment obviously helped.  The bench did a great job just getting us going on the field making sure our heads don't go down and that's really important."

The girls are right back at it tomorrow in Plymouth at 4:00pm to take on Plymouth South. 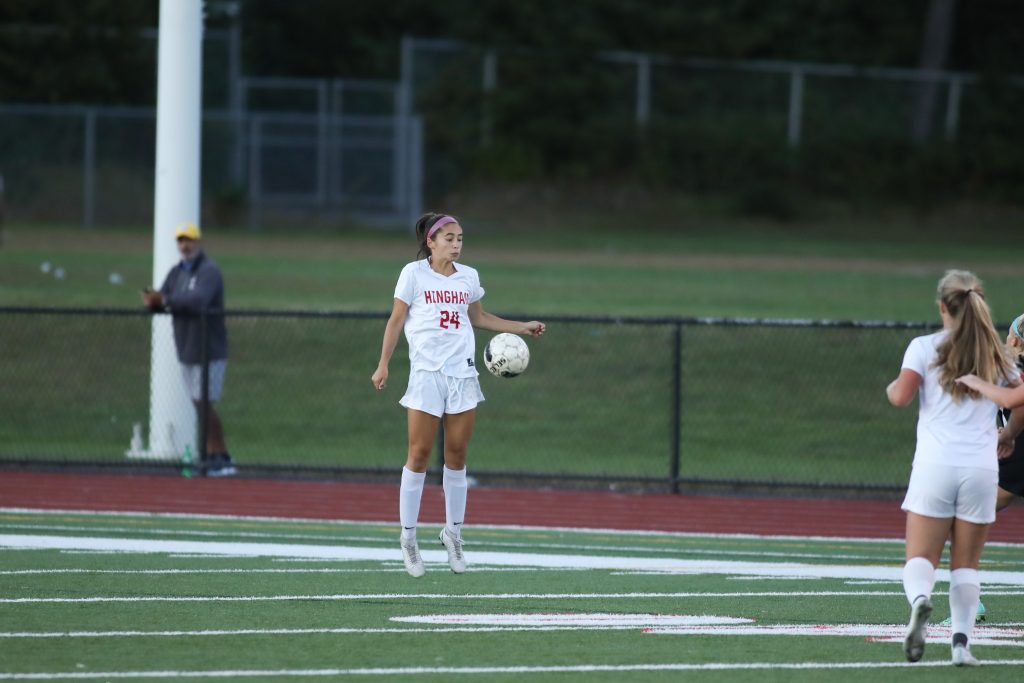 Sophomore Reese Pompeo making quite an impact on defense this year. 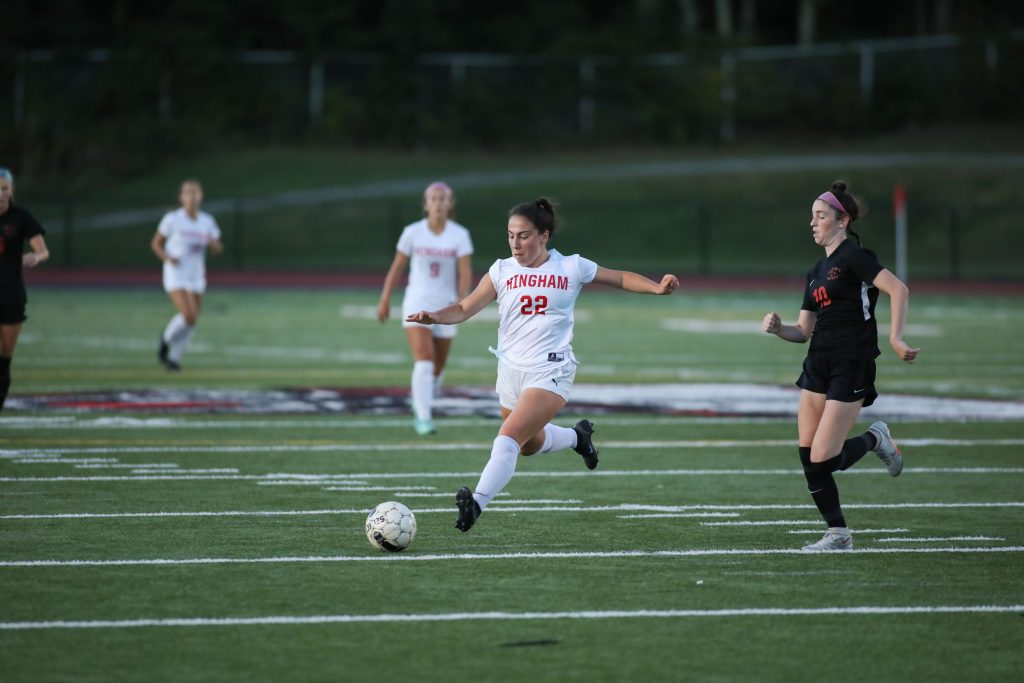 Senior Olivia Sharkansky putting the pressure on in the first half. 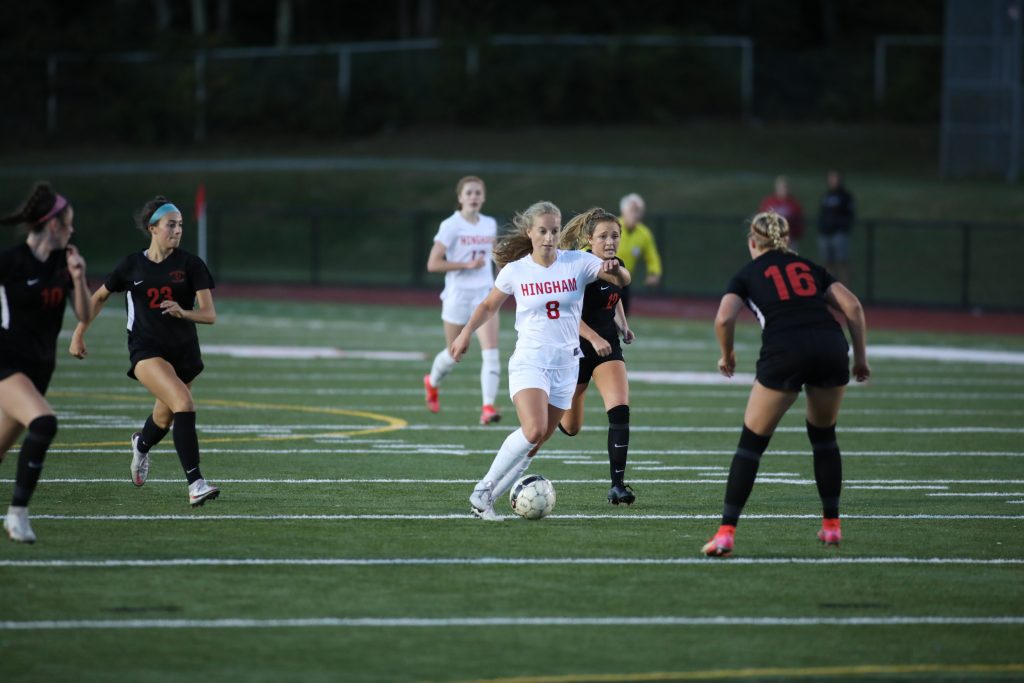 Junior Sophe Reale attracting some defenders before pasing the ball. 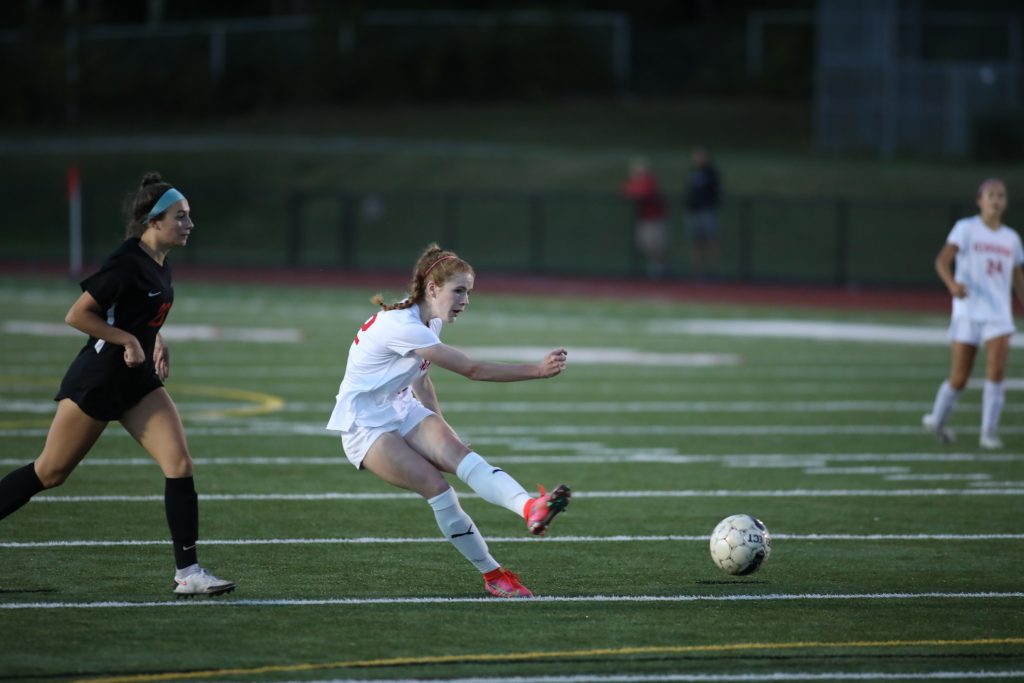 Sophomore Claire Murray with a shot early in the game. 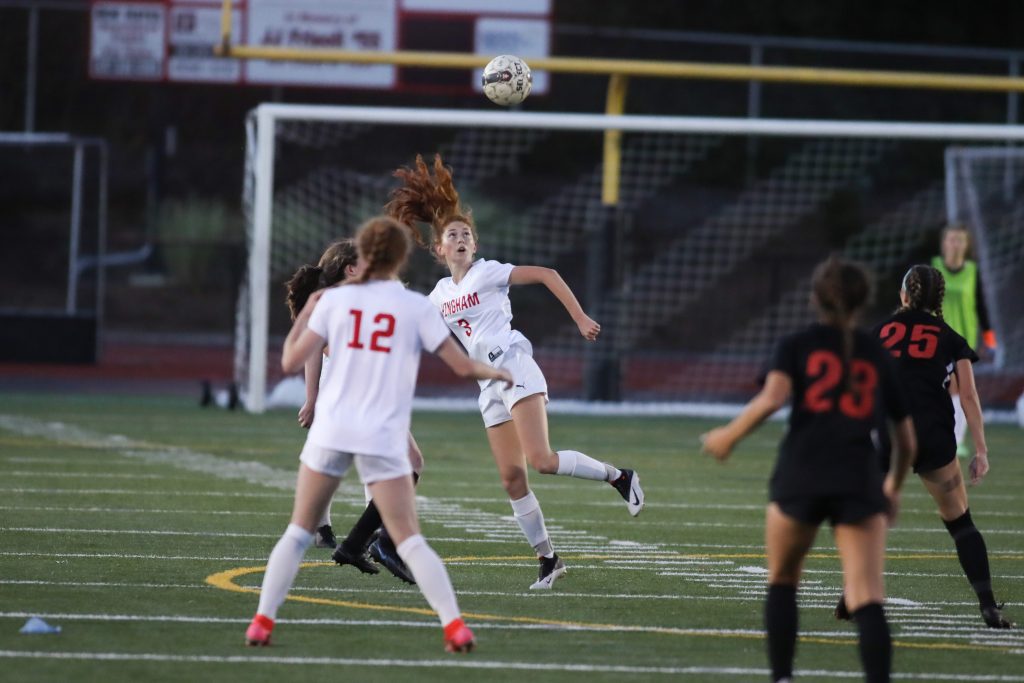 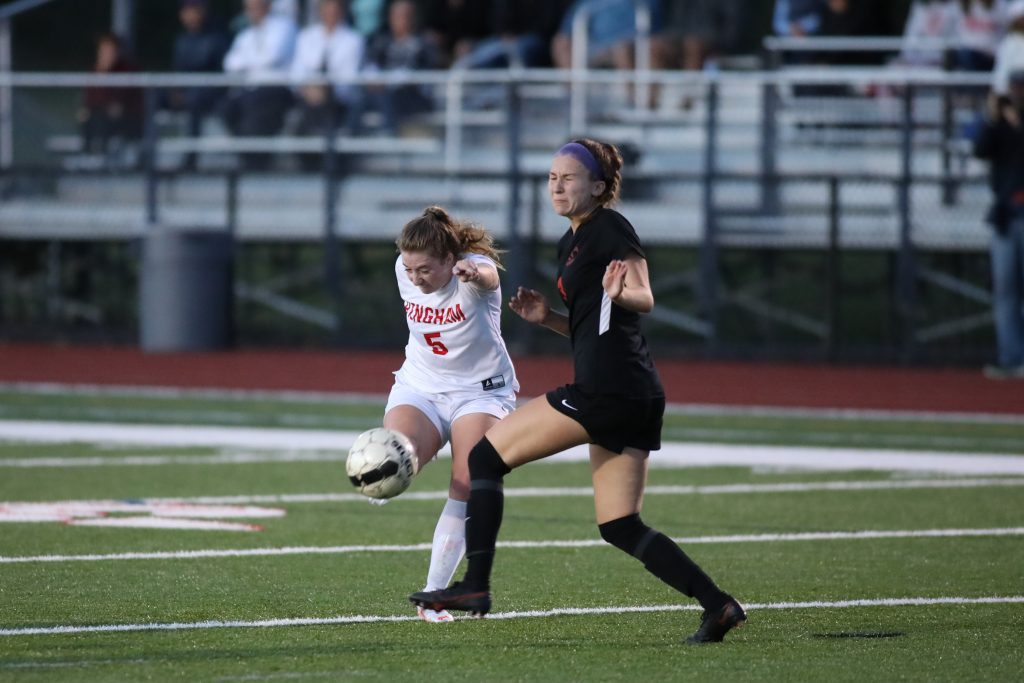 Senior captain Ava Maguire gets a rock of a shot off. 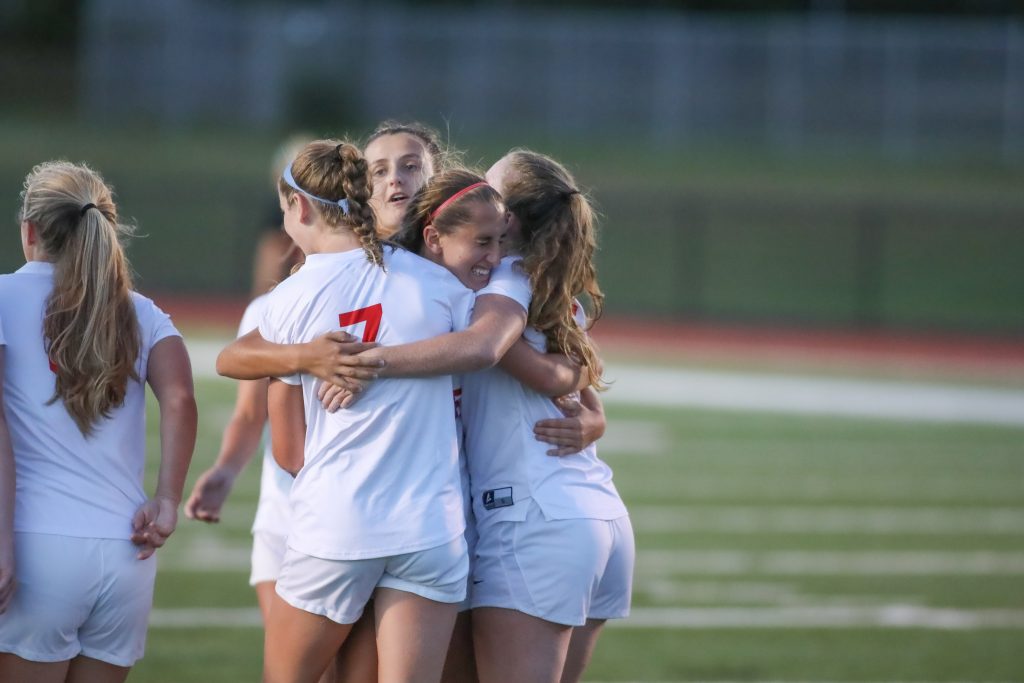 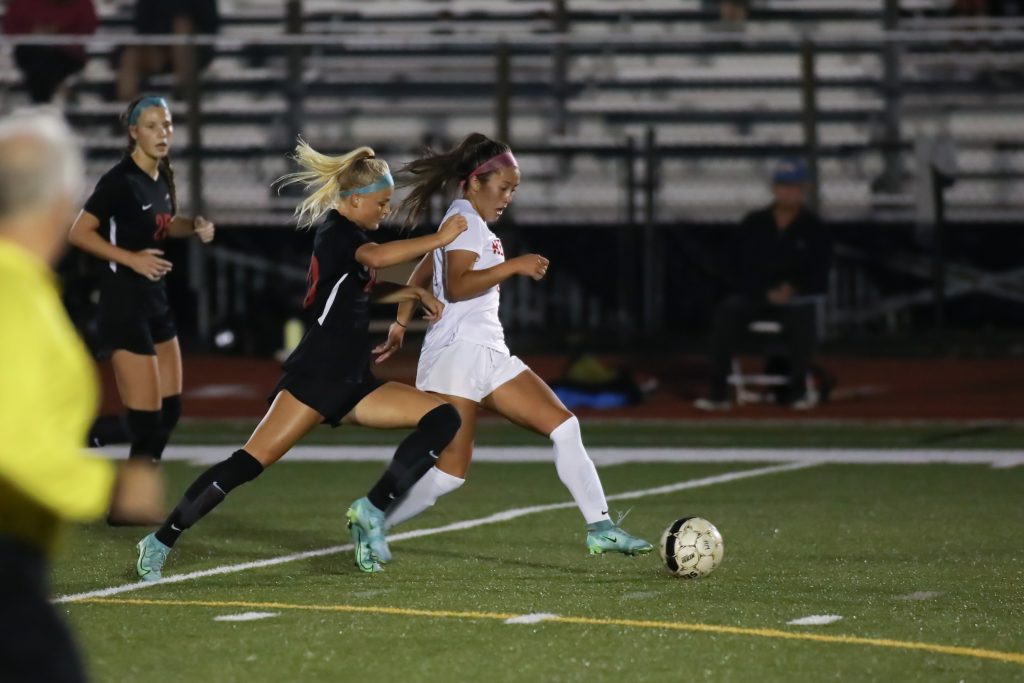 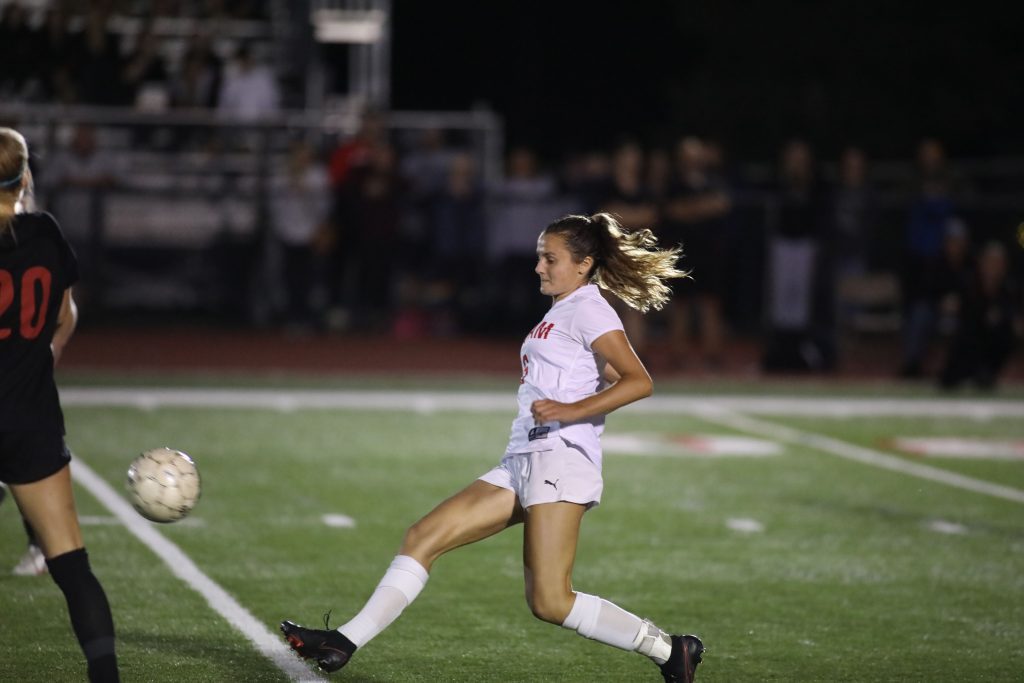 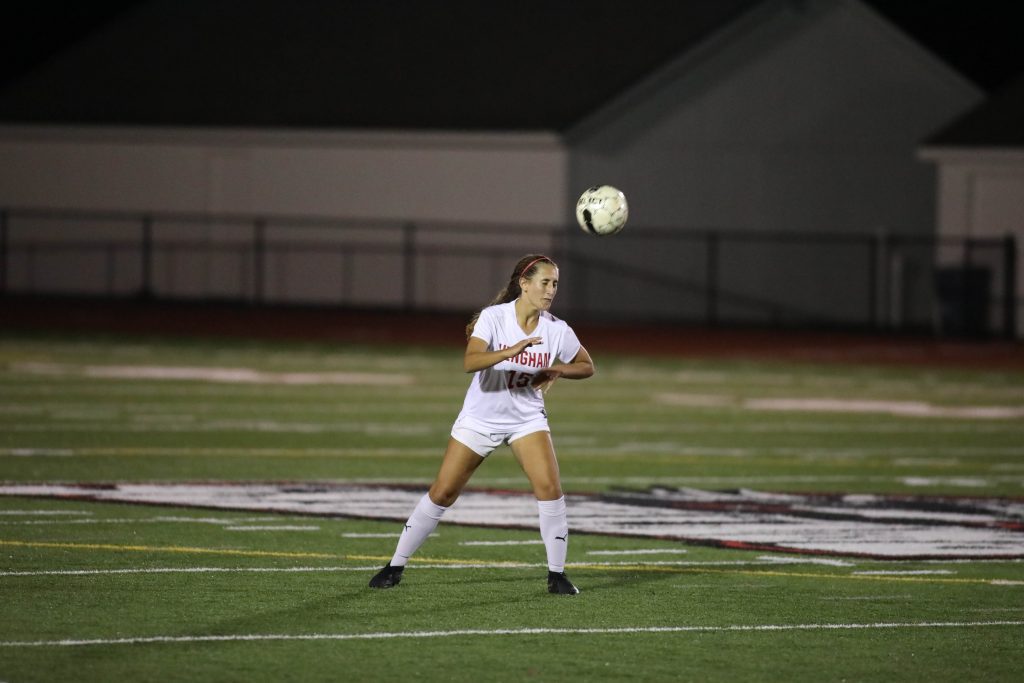 Senior captain Alexa Varholak is a key part of the Harborwomen defense. 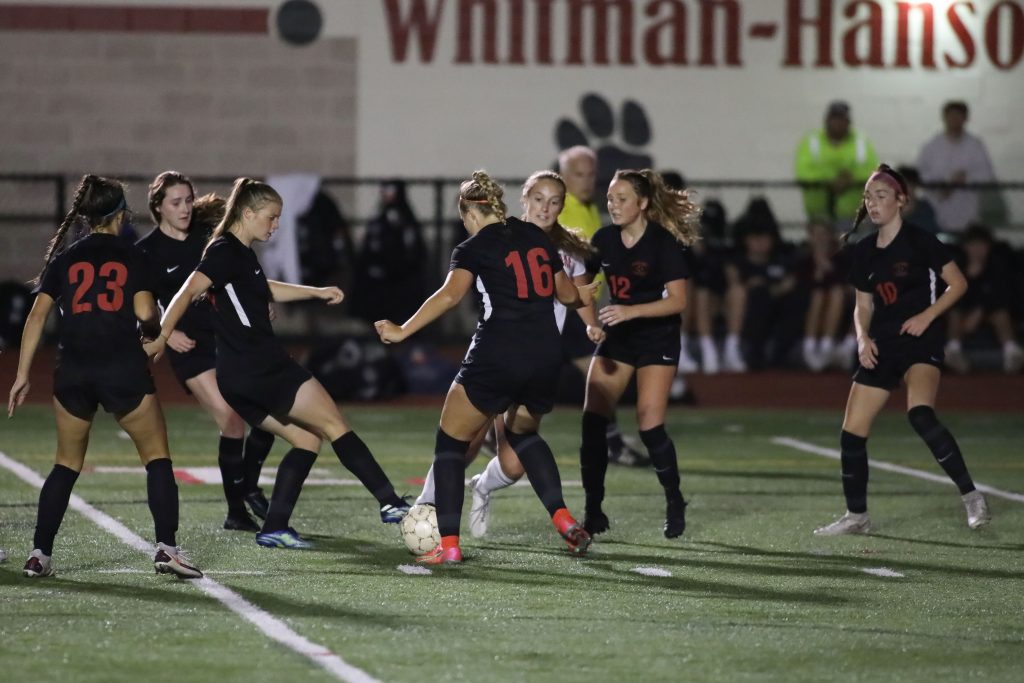 Somewhere in the sea of Pathers is junior Sophie Reale. 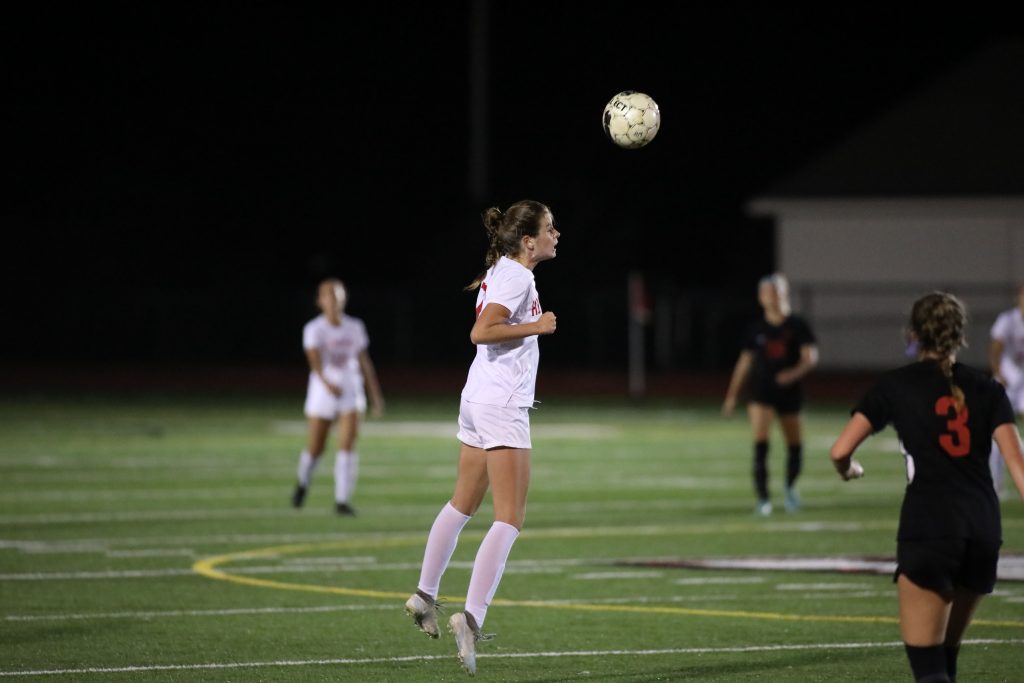 Junior Emily Gibbons also uses her head in getting the ball to her teammates. 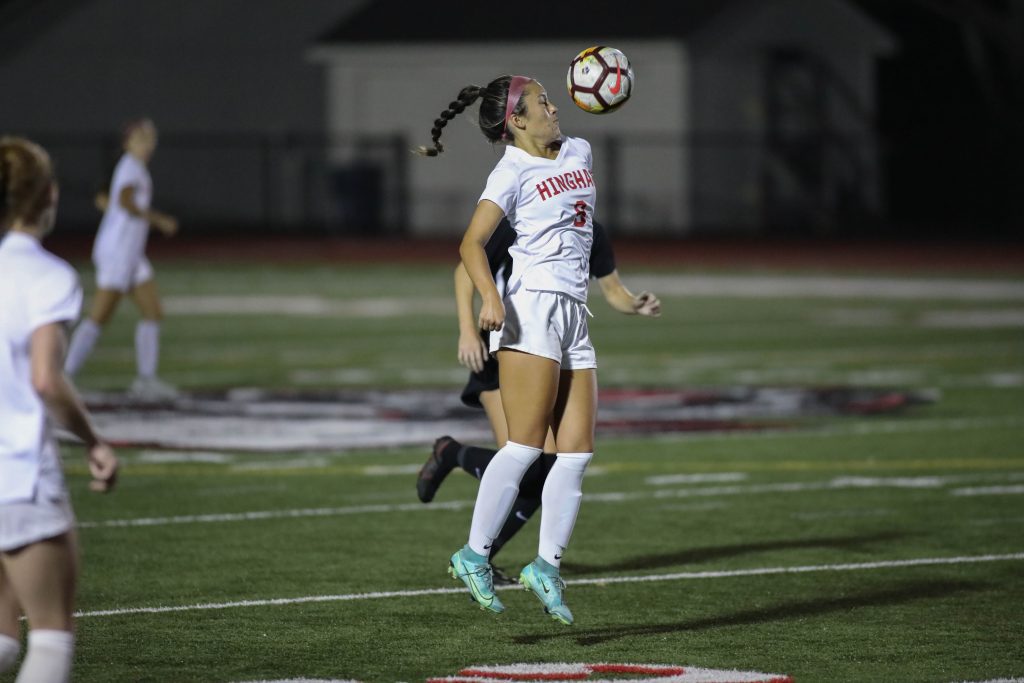 Senior Riley Cotter uses her shoulder to redirect the ball. 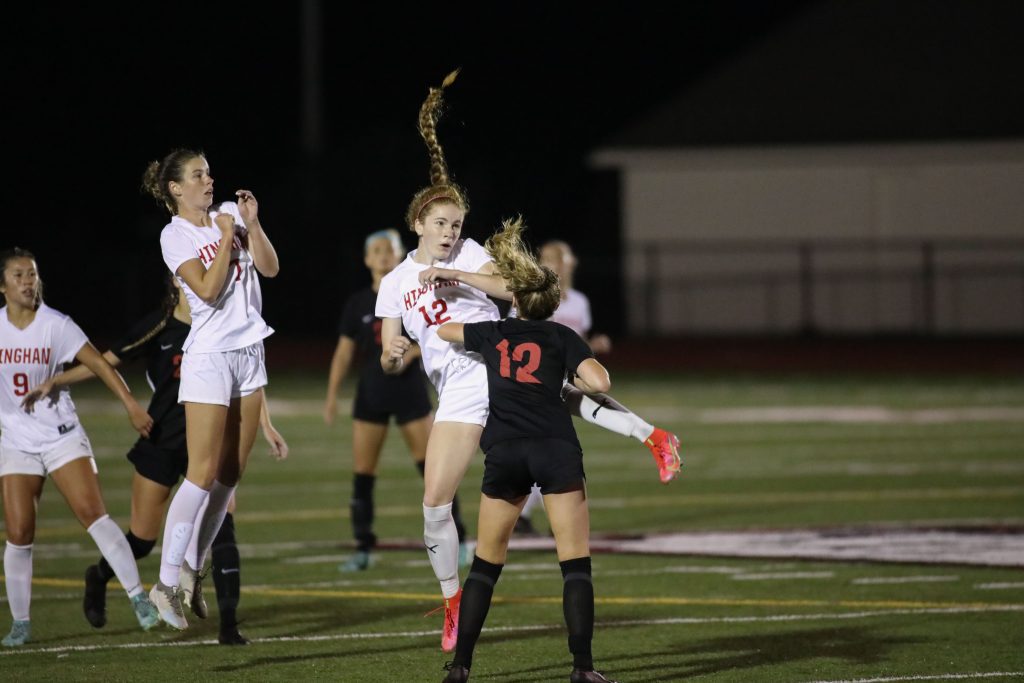 Sophomore Claire Murray uses every part of her body to extend for the ball.