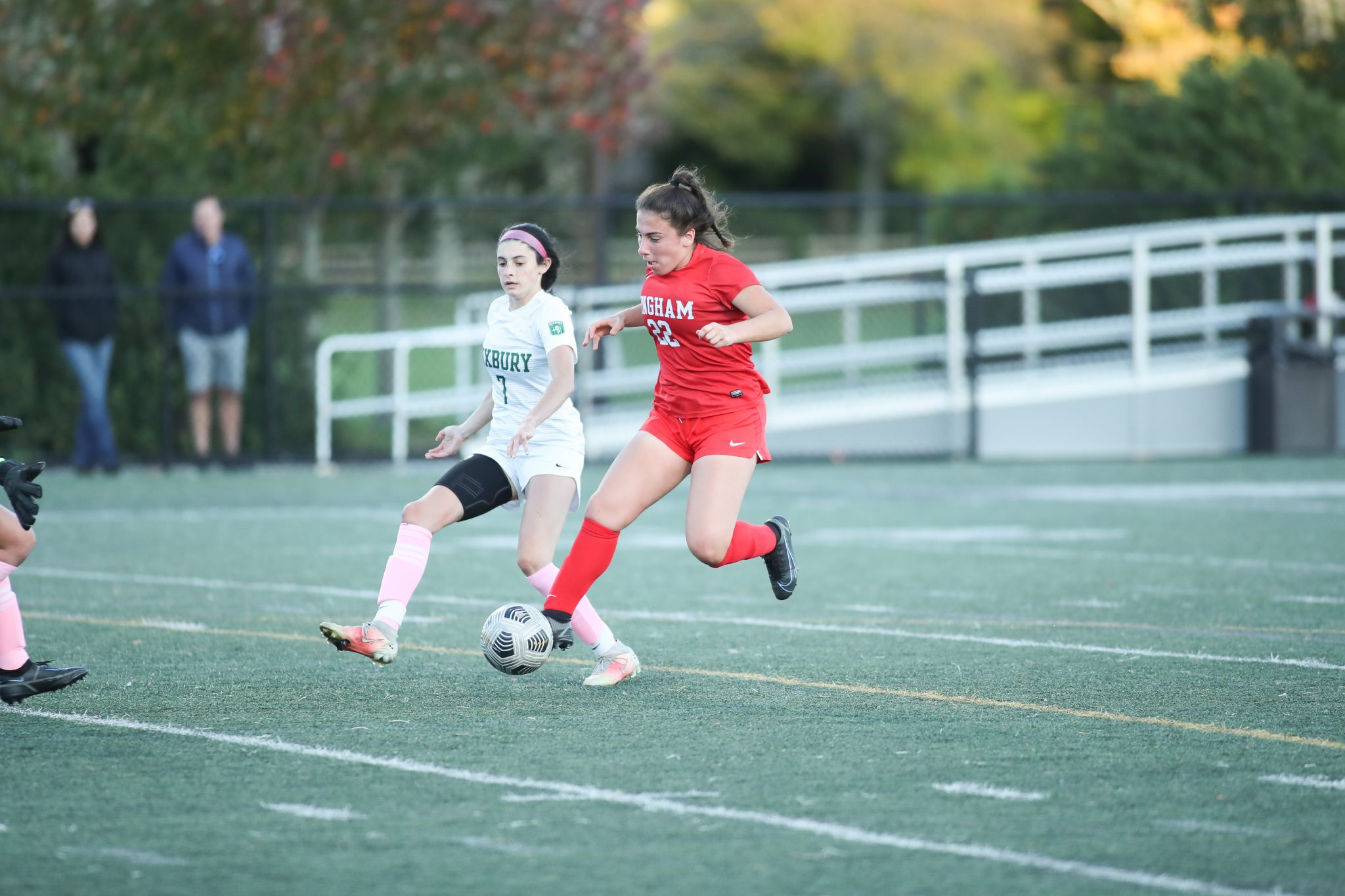 Senior Olivia Sharkansky breaks away from two defenders and past the goalie to tie the game midway through second half.

If this team goes as far as the polls and people expect them to this year, they will be looking back at last night’s game as a big reason why.

The joy of senior night quickly wore off once the game started.  Duxbury was the one that came out with energy and momentum that caught the Harborwomen off guard.  The Dragons scored twice in the first 20 minutes. This was the biggest deficit the team had faced all year.  And while Hingham scored two goals of their own in the half, both were waived off due to offsides calls.

“We came out flat, it was not a good start,” head coach Sarah Dacey confessed.  “Pretty poor first half energy and effort.”

The Harborwomen woke up in the second half.  They came out firing, literally and figuratively, but got no reward for their early efforts.  After a couple of posts and a few amazing saves by goaltender Izzy Maser, senior Olivia Sharkansky put one in the back of the net from a Sophie Reale corner kick at the 55’ mark.  Not five minutes later, Reale passed the ball to Sharkansky again, who blew through two Duxbury defenders, a hold around the waist from Maser, and a final defender before tying the game at 2-2.

Reale gathered her third assist of the game when junior Emily Gibbons gave the Harborwomen the lead for good on a great midair, side of the foot shot with 15 minutes to go.  Sophomore Claire Murray added an insurance goal to put the game away for Hingham.

“Unbelievable (second half) effort,” says Dacey.  “ I tried to stay positive.  Just to see what they did and how they turned the game around.  I thought players like Emily Gibbons, Olivia Sharkansky,  Ava (Maguire), Sophie (Reale), Claire (Murray), and our back line just staying together, staying solid.  Just those players, their ability to step up in those big moments says so much about our character, so much about our talent level.  To come back and win the game from being down two-nil is pretty special.  It’s a pretty awesome feeling.  Like I just told the group, it takes a special group to do that. My favorite part was seeing their teammates cheering for them.”

The win is great, but the experience of coming back is just as important according to Sharkansky.

“We haven’t been in that position yet this year,” she tells the Anchor. “Our coach was like it’s kind of good that it’s happening to us.  It made us work for something because I think we needed it mentally to have something to work for.”

The girls finish their season on the road for the next three games before they get started in the state tournament in a few weeks. 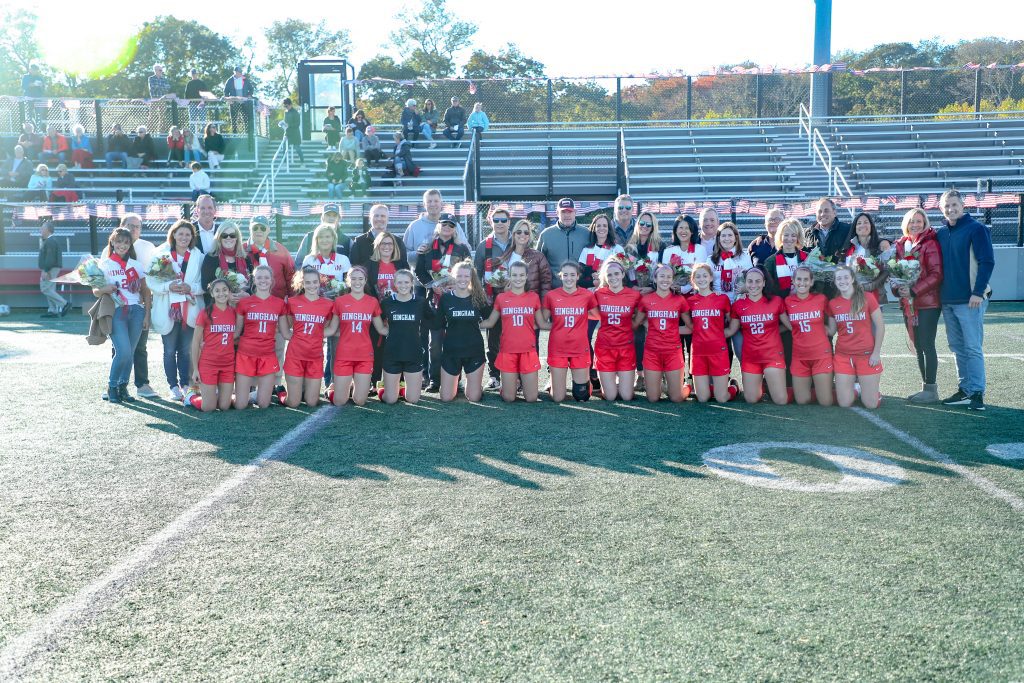 Congrats to the 14 seniors and their families on Senior Night 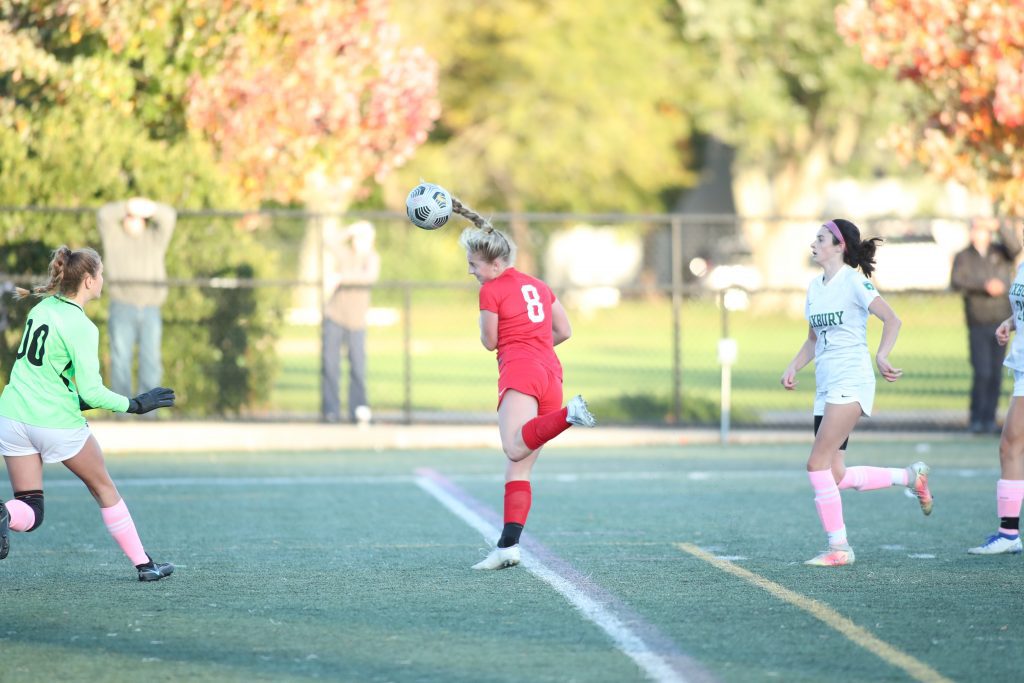 Junior Sophie Reale attempts to head one in early in the second half. 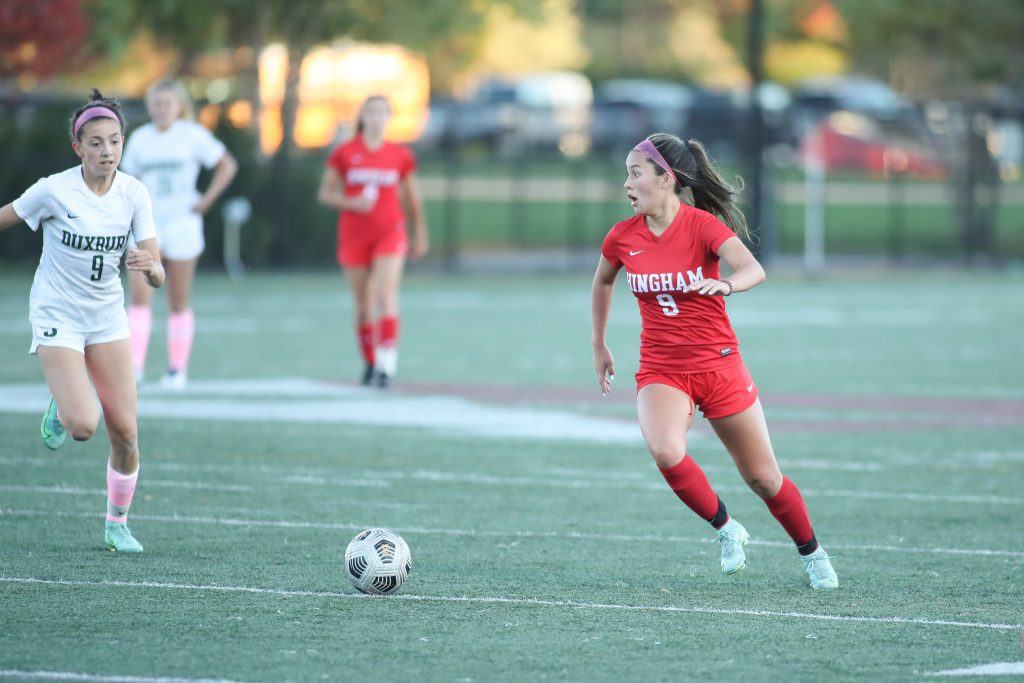 Senior Riley Cotter looks up field for a teammate. 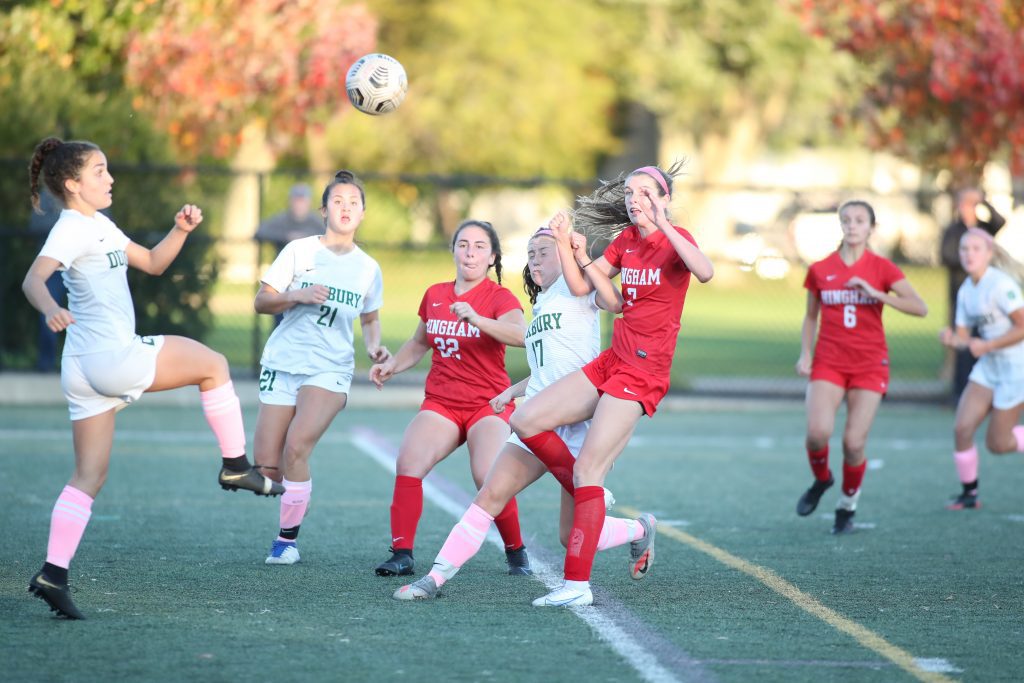 Senior Olivia Sharkansky fighting for postion before she knocks in Hingham's first goal of the game. 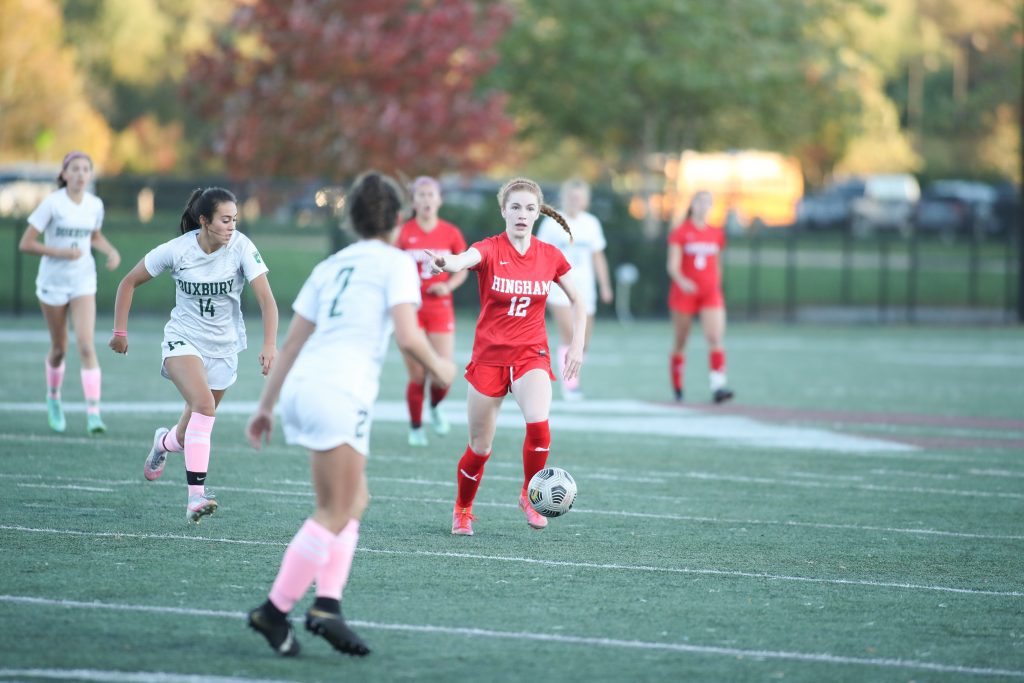 Sophomore Claire Murray directing her teammate where to go. 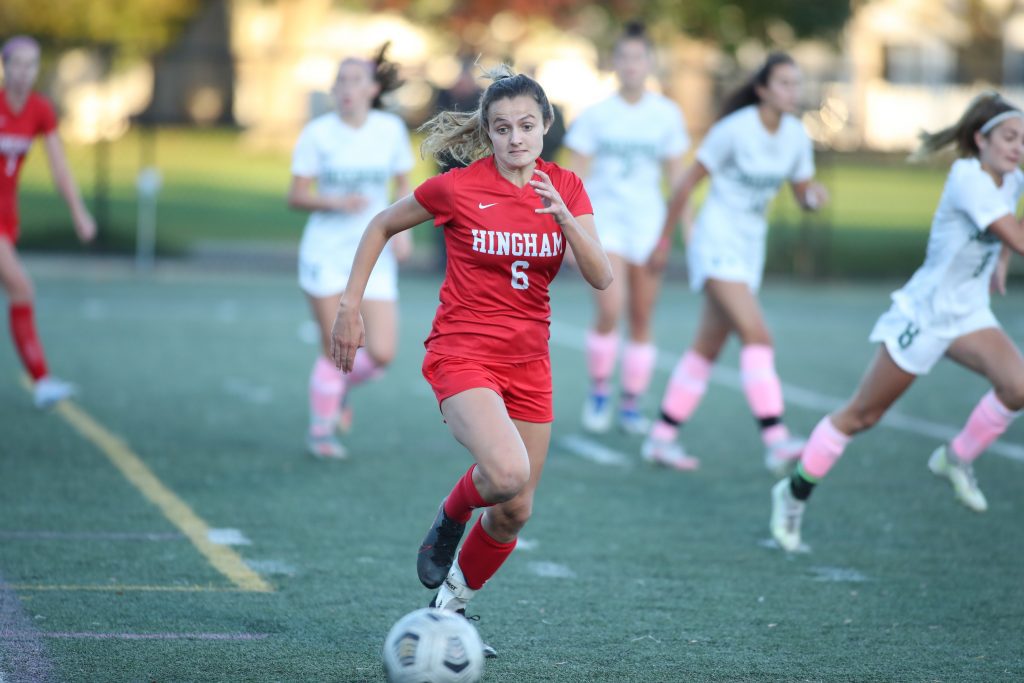 Junior Maddie Augie chases down a loose ball off a corner kick. 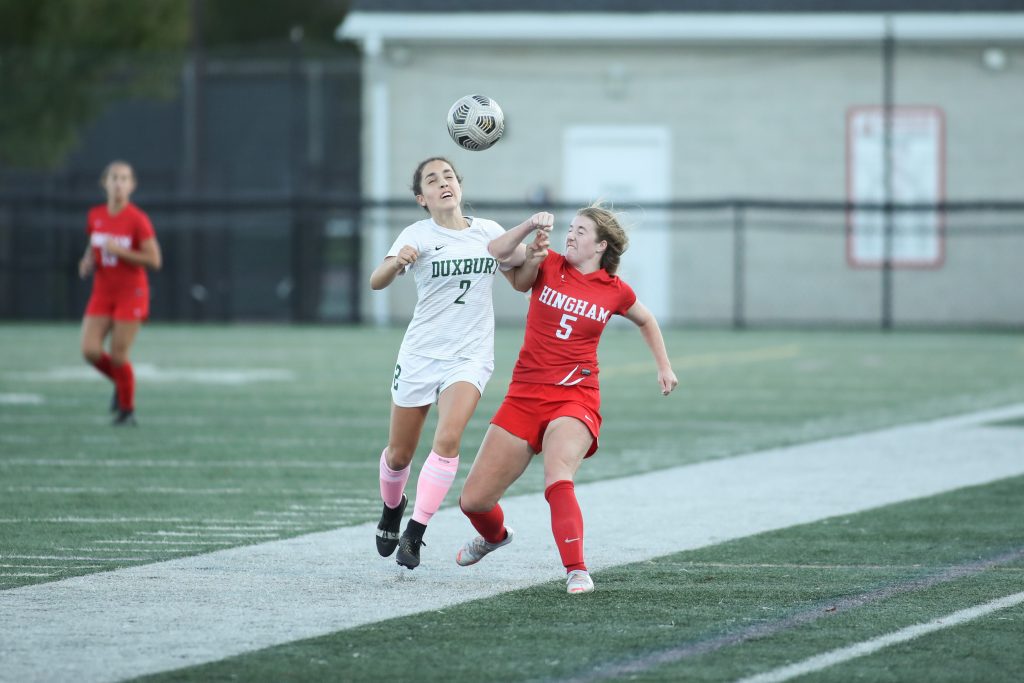 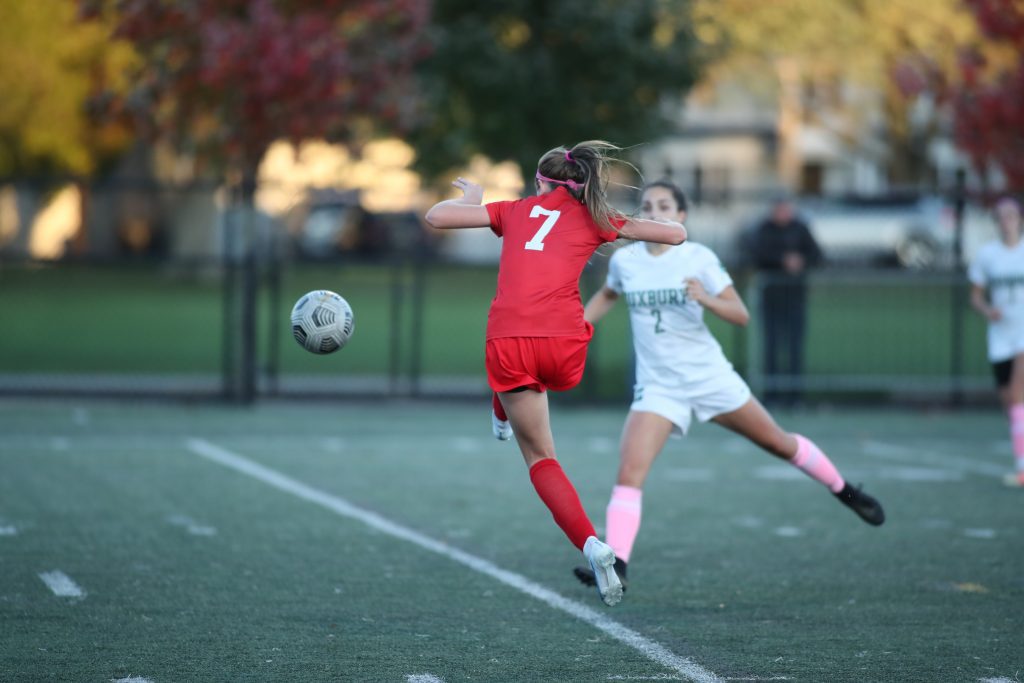 Junior Emily Gibbons gives the Harborwomen the lead on this shot. 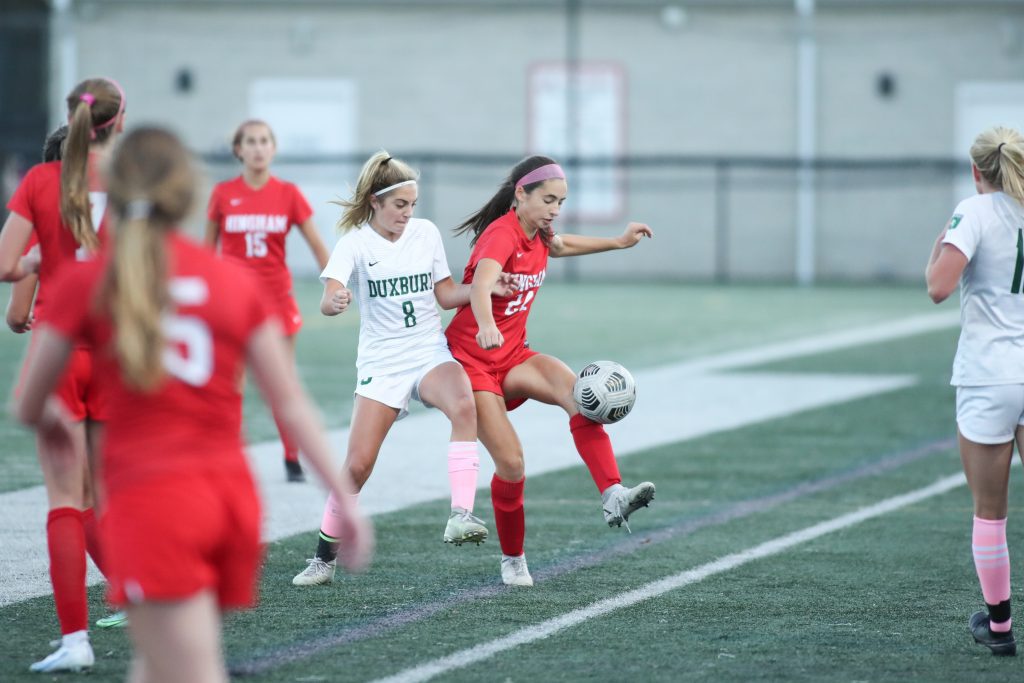 Sophomore Reese Pompeo fights off a Duxbury player in her own end. 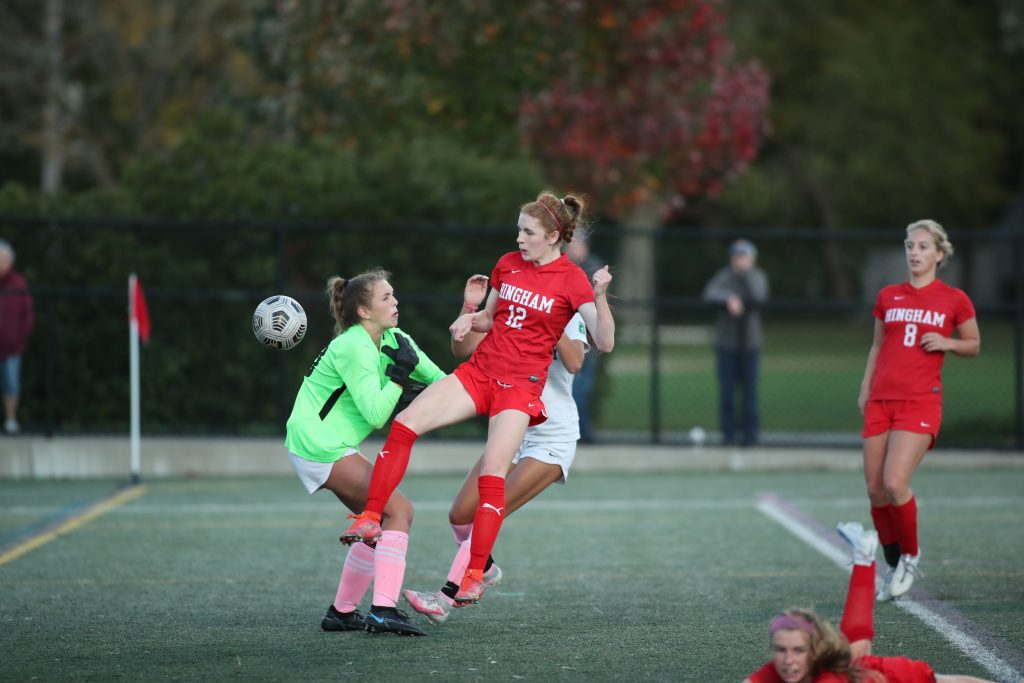 Sophomre Claire Murray gets one past the Duxbury goalie to seal the game. 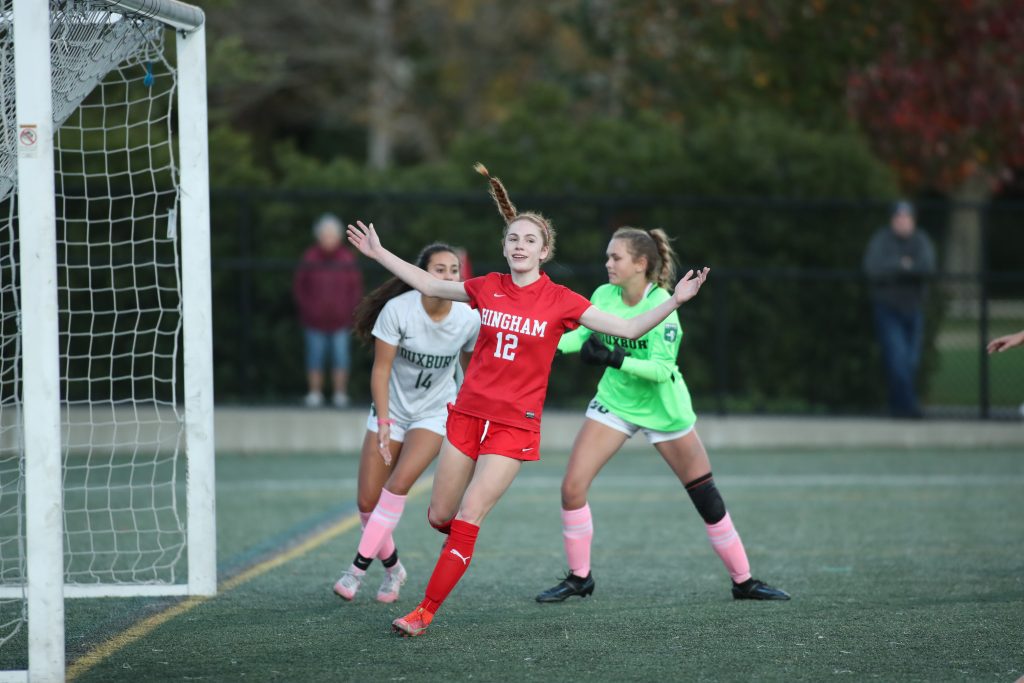