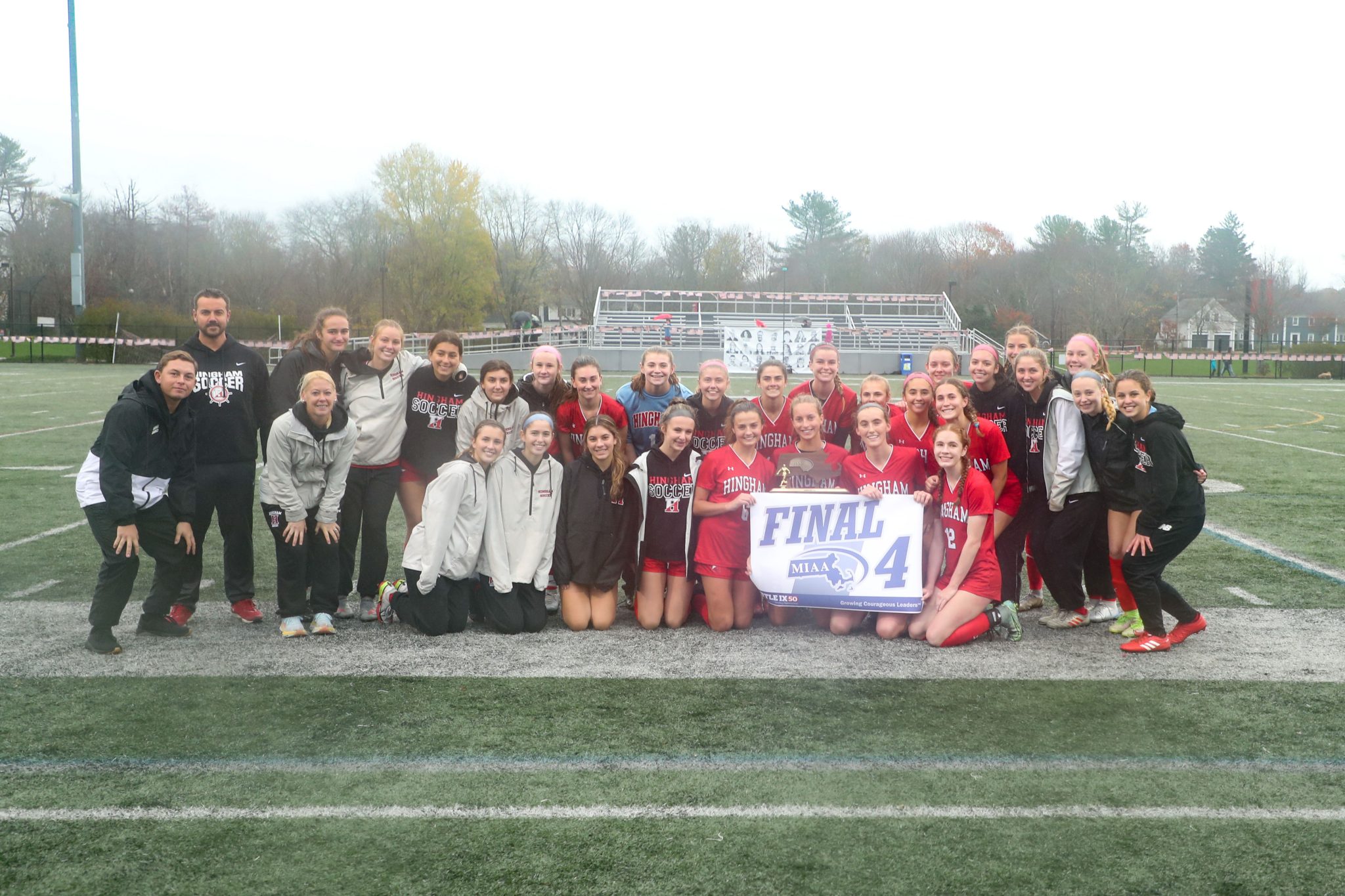 For the second year in a row, the Harborwomen are moving onto the Final Four.

Webster's defines experience as "the fact or state of having been affected by or gained knowledge through direct observation or participation."  Having experienced a heartbreaking loss in the finals last year and performed a little bit under expectation at the beginning of this year, the Hingham girls soccer team used that knowledge in yesterday's 3-2 win over Brookline.

The girls faced their toughest opponent yet in the state tournament and had to find a way to push through the adversity and come away with a win.  The 7th ranked Warriors brought the intensity, and their fans, to Hingham and more than kept it close throughout the game.  Just as in the previous two games, senior captain Sophie Reale opening the scoring with 15:35 the first half on a direct kick that never got above 6 inches off the ground, hit the far post and bounced in the back of the net.

The 1-0 score kept through halftime until Brookline scored on a corner kick just under 6 minutes into the second half.  The game tying goal could have been a momentum changing moment in the game for the Warriors.  But Hingham didn't panic and experience kicked in.  Less than two minutes later, junior Claire Murray hustled up field and stole the ball from a defender and passed it to a wide open Reale who buried her second of the game, and astounding 10th of the tournament.  Murray extended the Harborwomen's lead to 3-1 with just over 17 minutes to play when she took a Reale corner and buried it the far corner of the net.

Brookline, to their credit, kept up the pressure and cut it to a 3-2 with under 2 to play.  However, only playing with 10 players after a red card hair pulling incident, the Warriors just couldn't get the last goal they needed and Hingham held on for the win.

"I think they've come a long way," reflects head coach Mary-Frances Monroe. "I think having a lot of adversity in the beginning of the season has prepared them and made them stronger for times like this.  We've had conservations about if we are up a goal, if we are down a goal how we handle it. So I'm just really proud of them for listening to what the coaches have been telling them and making it work out there."

In addition to the coaching, the fact that the majority of the team has been together for two years going through the highs and lows has prepared them for these situations.

"We work so well as a team and we know we can do it," Murray explains about the team's response after Brookline tied it up. "Because we have so much strength when we work together.  I had to bring that energy.  We all had to bring that energy and we came back even stronger.  I love this team.  We didn't have that much adversity last year. We know this year we have to have a strong mindset and put the work in.  It has to come from us.  It's not always a given.  We know that it's always possible not to get the best outcome, so we always have to continue to work hard and to fight for the outcome we want."

The final score may not reflect it, but Hingham's defense was outstanding throughout the whole match.  This opponent was clearly the most talented they've faced so far and the D stood up to the challenge.

"Our defensemen have gotten better and better each game," Monroe goes on to say. "They have been composed.  Grace (Maroney) is extremely fast and does her job.  She's marking one of the best players on the other team and she does her job very, very well."

The Harborwomen will face undefeated 3rd seed Bishop Feehan Tuesday night at 6pm at Whitman-Hanson High School for a chance to go back to the state finals on Saturday. 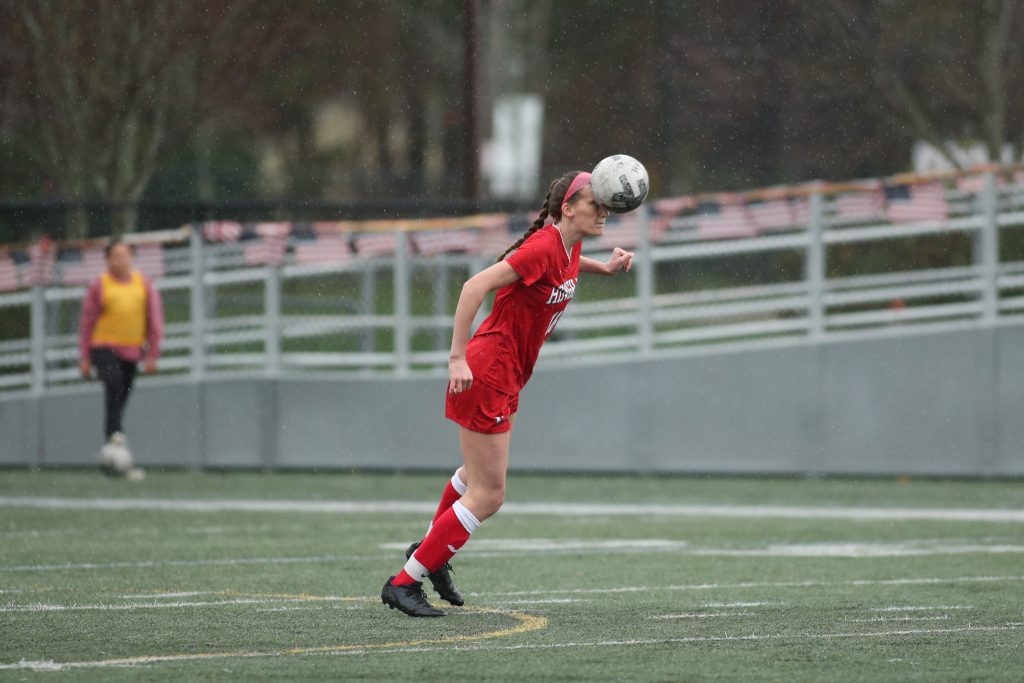 Senior captain and defensemen Caroline Schiffmann clears the ball with a header. 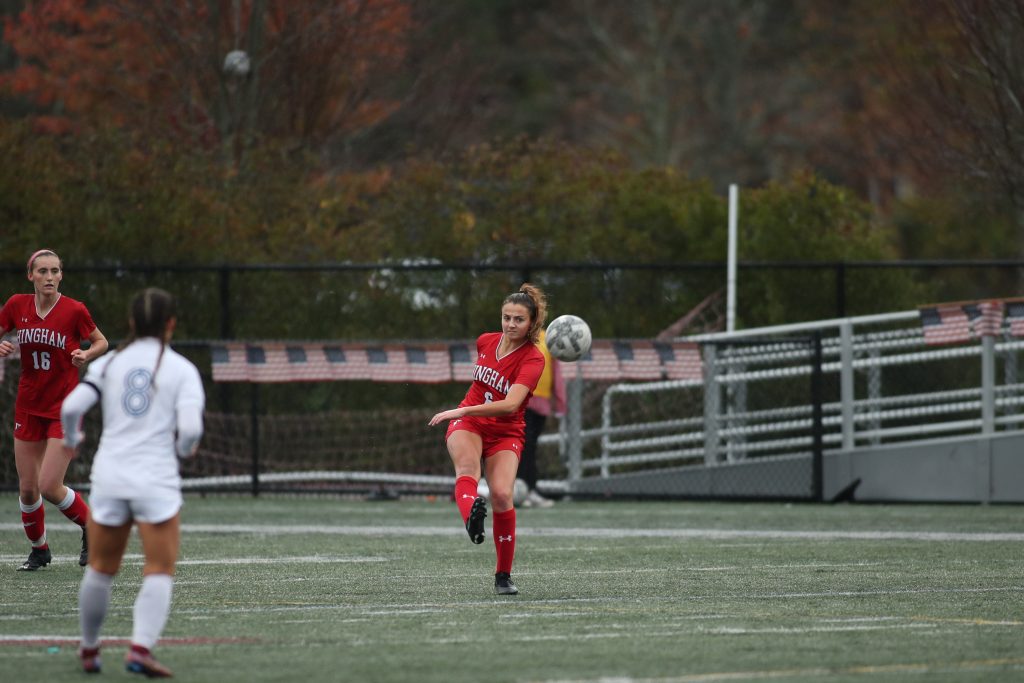 Hingham's defensive anchor, senior captain Maddie Aughe lets nothing get by her. 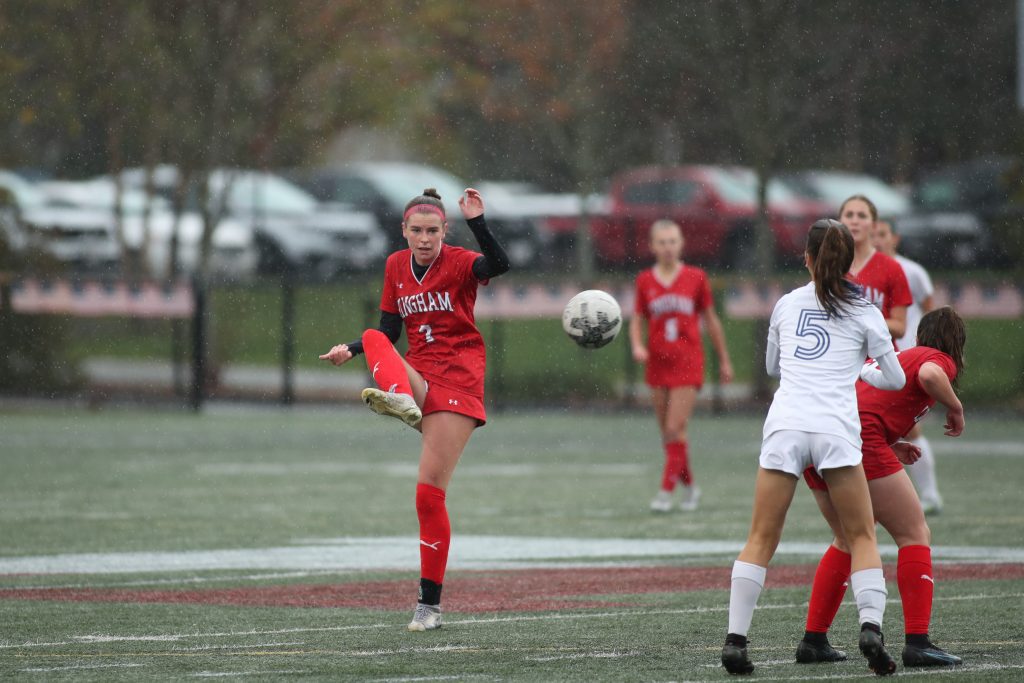 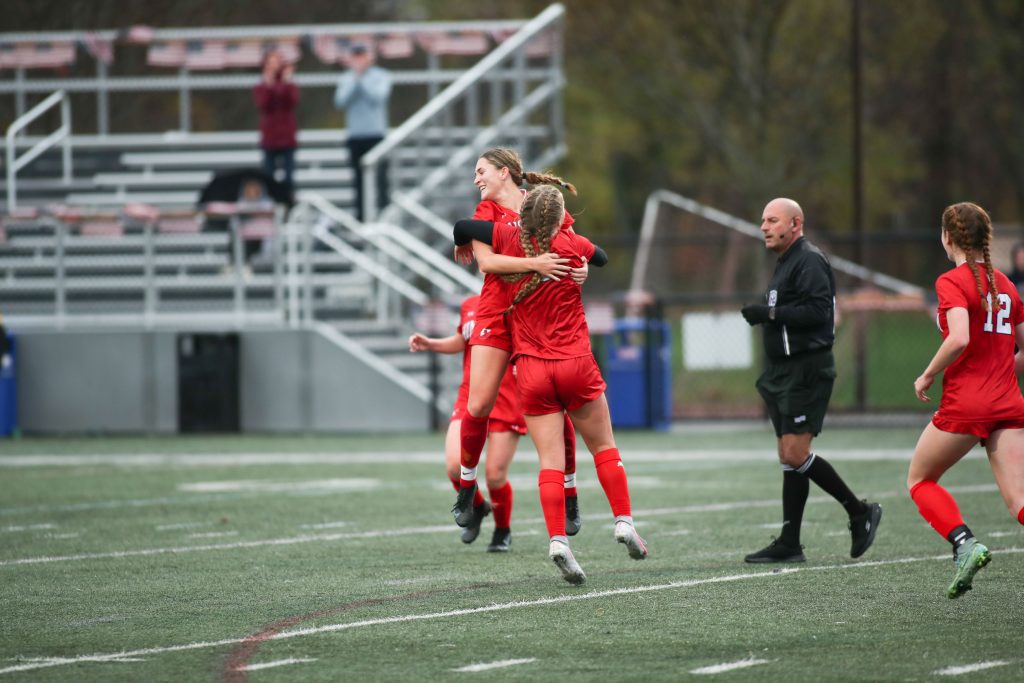 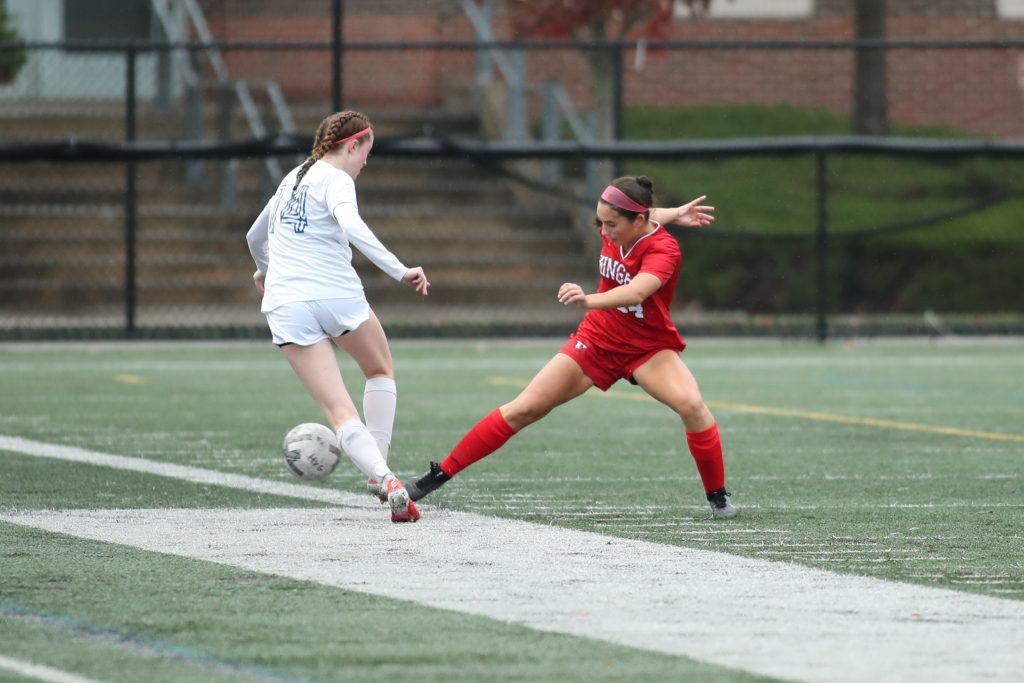 Junior Reese Pompeo pokes away the ball from a charging forward. 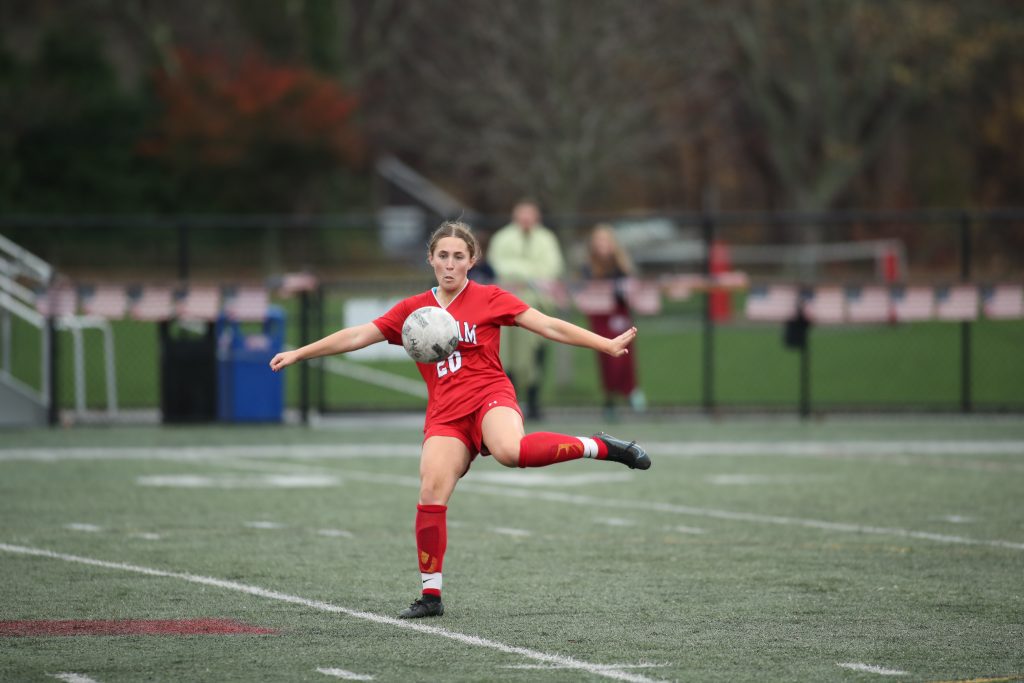 Junior Ava Varholak winds up to clear the ball. 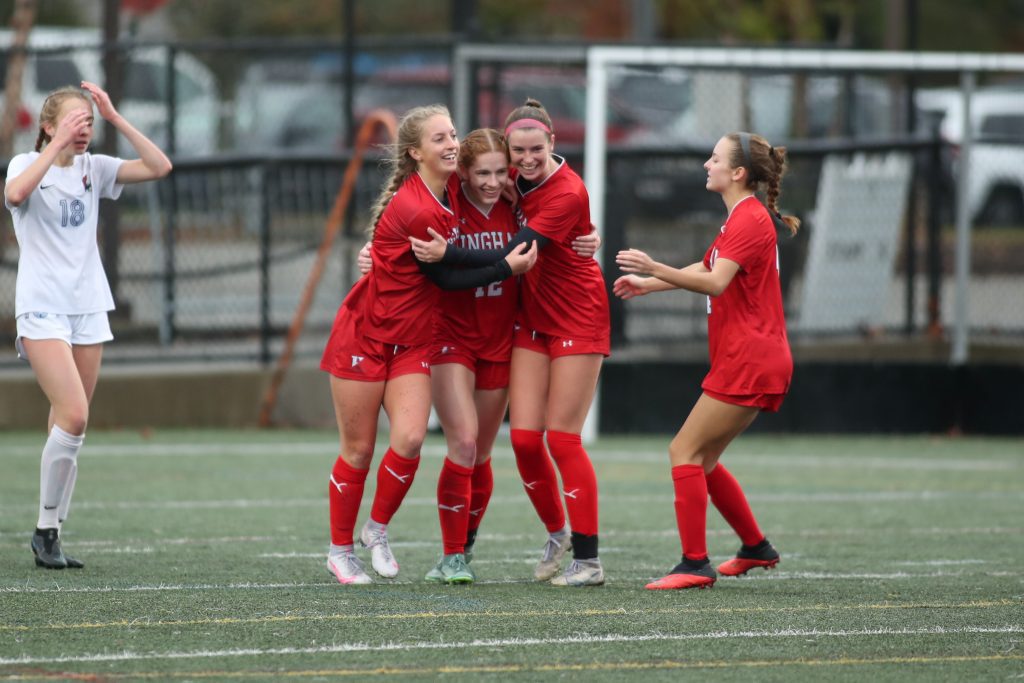 Celebrations all around after junior Claire Murray stole the ball and passed it to senior Sophie Reale for the score. 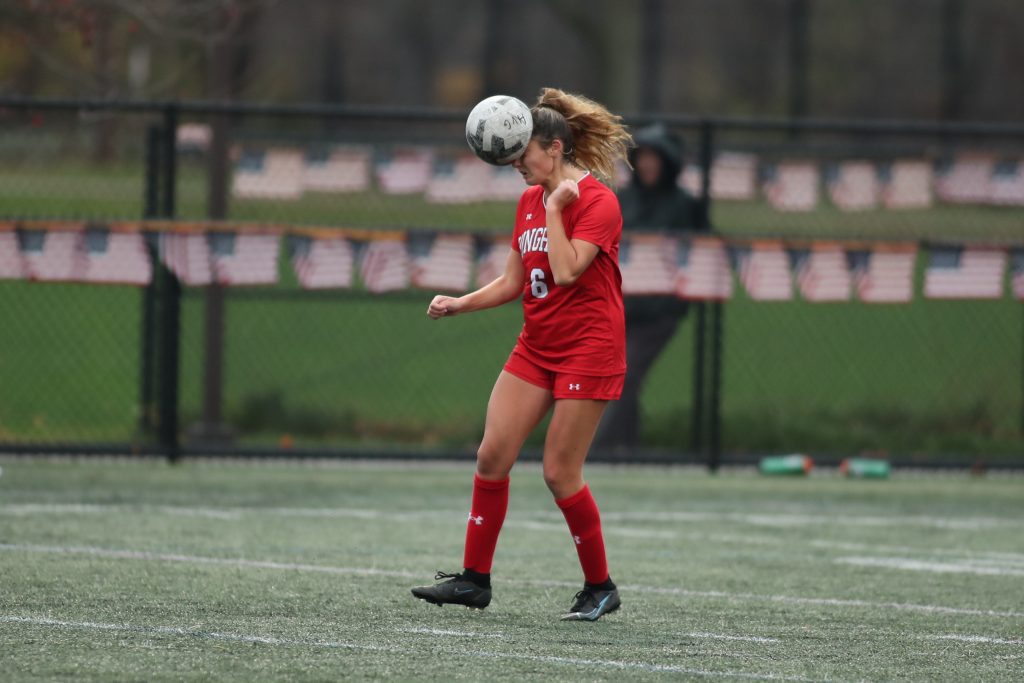 Senior captain Maddie Aughe using her head to get the ball out of Hingham's end of the field. 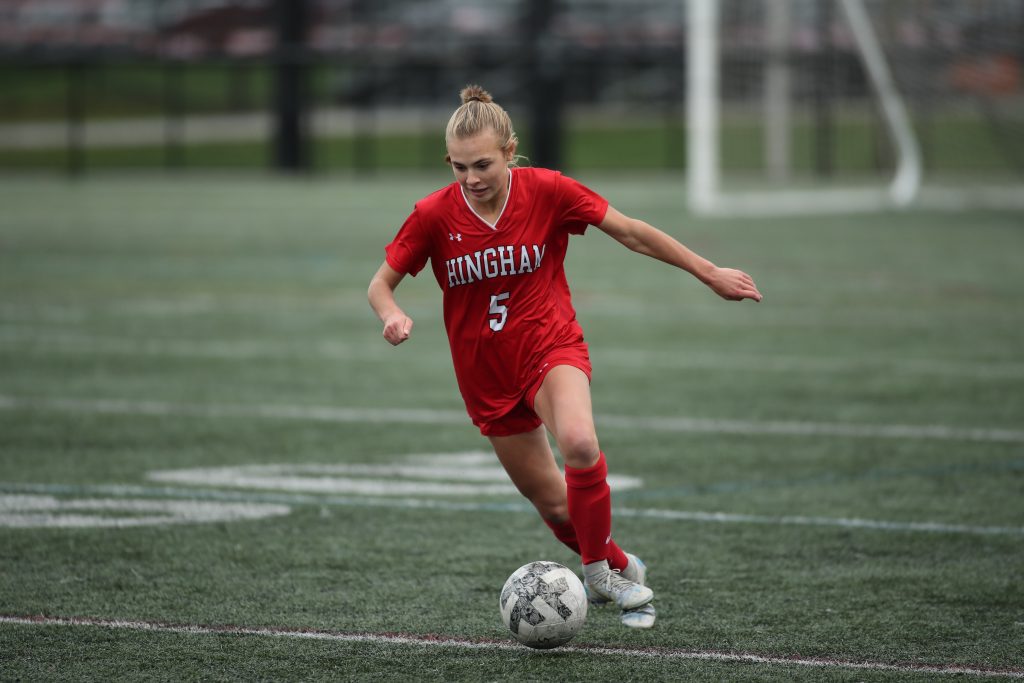 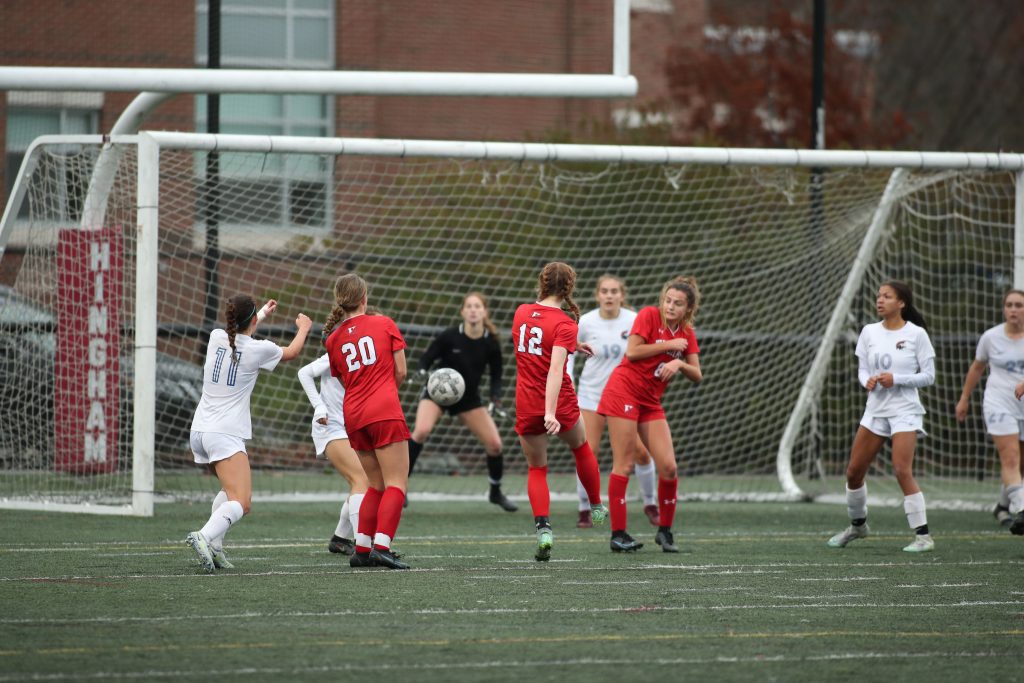 Junior Claire Murray puts the game away in the second half with Hingham's 3rd goal. 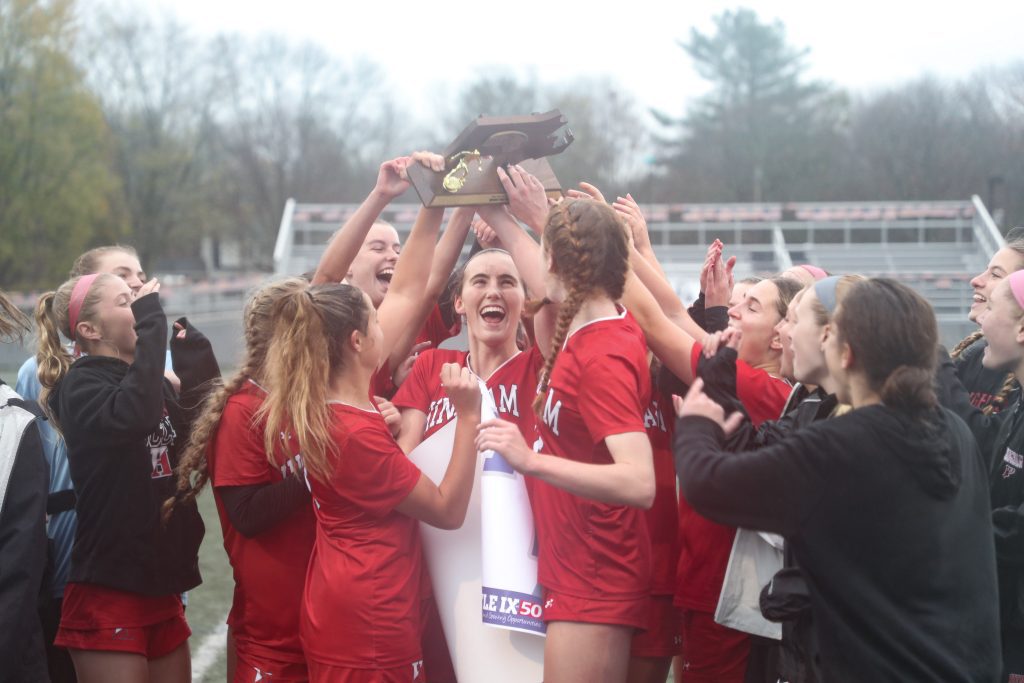 Onto the Final Four.