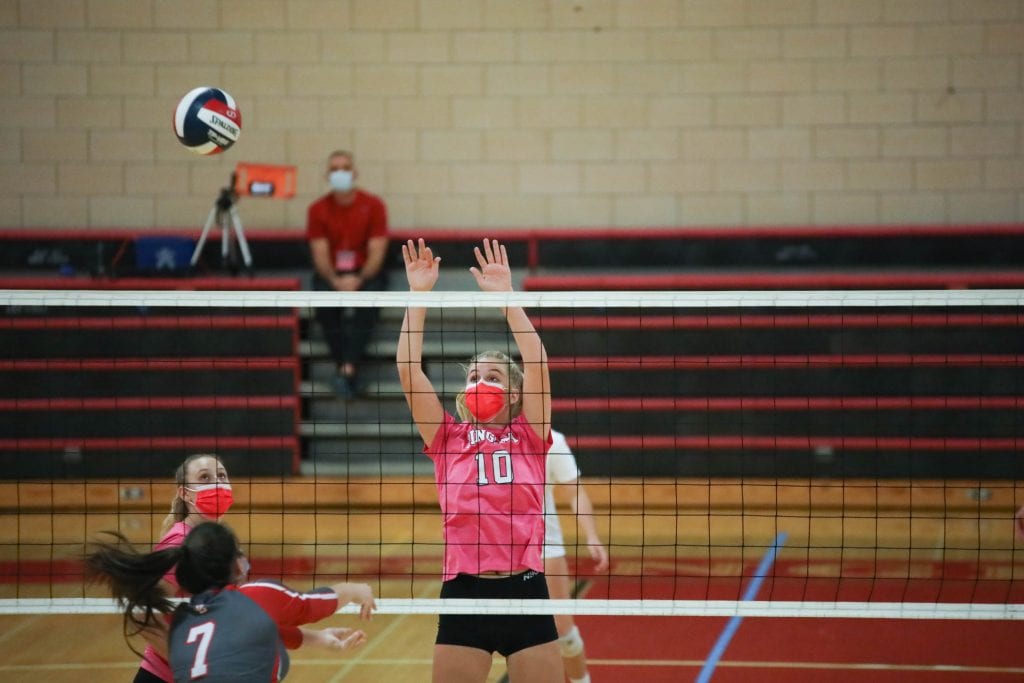 Junior Maureen Koenen goes up for the block. (Photo by Joshua Ross Photography)

Hingham Varsity Girls’ Volleyball has a record of 5-1, with a loss to rival Duxbury as the only blemish on their record. Most recently, Hingham defeated Marshfield in three sets. The first set Hingham started slow, down 6-13 at one point. Hingham steadily gained traction and finally gained the lead 24-23 and ultimately won 25-23. In the second set, Senior Captain Carly Kennedy started the team off strong serving four points in a row for a 4-0 lead. Kills by outside hitters Senior Captains Shea Galko and Haley McConnell, coupled with strong performances by middle blockers Lilly Steiner and Maureen Koenen, helped seal the victory 25-20.  By the third set, the Harborwomen gained momentum and won 25-14, much helped by a nine service streak by Galko.  The unsung heroes in all three sets were Senior Zoe Bogle who plays libero and relentlessly digs any and all serves and spikes that come her way, along with Senior setters Carly Kennedy and Gabby Macedo who consistently set up the team for success.

“Overall I am proud that the girls never gave up and fought back to win the first set. I am also proud of my underclassmen for joining the later sets with the same energy and confidence as the seniors. I look forward to bringing that same intensity to our Dig Pink match,” said head coach Katelyn Sassorossi.

The Harborwomen’s next game is Friday, October 23rd against Plymouth North where they will host a “Dig Pink” event to raise funds supporting stage 4 breast cancer research. Although spectators are limited due to COVID, please consider making an online contribution to this important cause at https://giving.side-out.org/campaigns/16927.