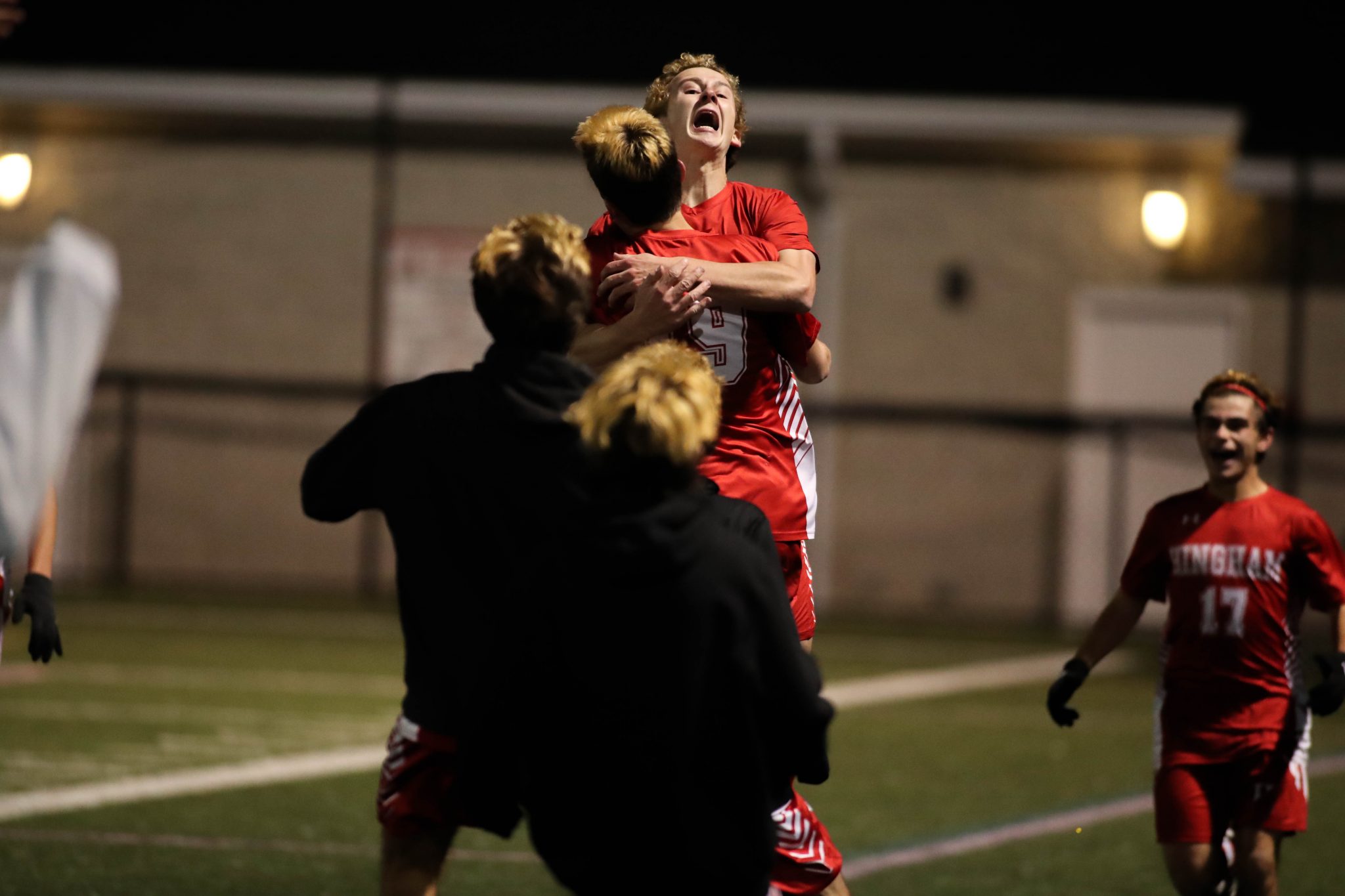 Junior Aidan Brazel jumps into his teammates arms after scoring the winning goal in OT.

Both the girls and boys soccer teams survived their opened round matches on Saturday.  The teams, who are both ranked #1 in the state, had back to back games as they opened their tournaments at home.  If Saturday’s games are any indication of how the rest of the tournament is going to go, better buckle in over the next few weeks.

The girls were first up as they took on the 32nd seed Newton North Tigers, who were coming off their play-in game win against Chelmsford High. The Harborwomen scored first in the eighth minute when junior Sophie Reale put one past the keeper.  The match had the makings of what you would expect from a 1 vs 32 match-up, but the Tigers had different plans.

The ladies from Newton North kept it a one goal game throughout the rest of the first half and a majority of the second half.  A combination of wide shots, shots directly at the goalie, or a spectacular save by a defensemen on an Olivia Sharkansky shot, Hingham couldn’t find a way to add to their lead.  Then with eight minutes to go in the match, junior Kelsey Tarby gave the Harborwomen the insurance goal they needed.

Once again the defense was outstanding and Patriot League fewest goals allowed leader, senior goaltender Kathryn Wilson, posted yet another shutout.  While a win is a win, especially in the state tournament, head coach Sarah Dacey thinks the team could play a lot better.

“They were out of sync, they weren’t communicating, weren’t winning 50/50,” recalls Dacey telling her team at half-time.  “It was just decisions and choices.  They did a better job in the second half, which is great, but we got to start right away.  Hopefully we got the nerves out.  It’s tournament time and it’s win or go home.  We need to understand it going to be really hard and by not means going to be easy.  We have to be ready to go whoever we draw next game.”

The Harborwomen will be face North Andover High on Tuesday at home at 5pm.  North Andover beat Framingham 2-1 in penalty kicks in their first game.

As soon as the girl’s match ended, the boys took to the pitch to face off against Central Catholic High School.  The boys from Lawrence beat Revere in OT in their preliminary match.  Much like the girls, the Harbormen control the play most of the game, but just couldn’t cash in on a goal.  Central Catholic defense played up most of the game, causing more than a few chances from Hingham to be called off sides, including a goal.

Even in a nil-nil game, it never felt like the game was getting away from Hingham.  But, as time slowly runs down, any small mistake or penalty could be the difference in the game.  The Harbormen continued their pressure in the final minutes, but could not break through.  Regulation end with zeros on the board and we were heading for extra time.

We didn’t need much of it though as junior Aidan Brazel got behind the Central Catholic defense (on-sides this time) just as a Cole Sampson pass came over his head.  Brazel with two steps ahead of a couple of defenders drilled it in the bottom lefthand corner of the net to end the game just a minute into the sudden death overtime.

“I think we clearly controlled the game, especially in the later stages,” explains coach Ken Carlin.  “Maybe we were a little unlucky we didn’t score a bit earlier.  We had a lot of chances and (their) goalkeeper came up big.  And that’s tournament time.  Sometimes the goalkeeper, one way or the other, (determines) as far as you go.”

If that’s the case, Hingham in is good shape with their senior keeper Jack Price, who also recorded another shutout.  Hingham will take on another Catholic school in St. Johns Prep after the girls' game on Tuesday night at 7pm. 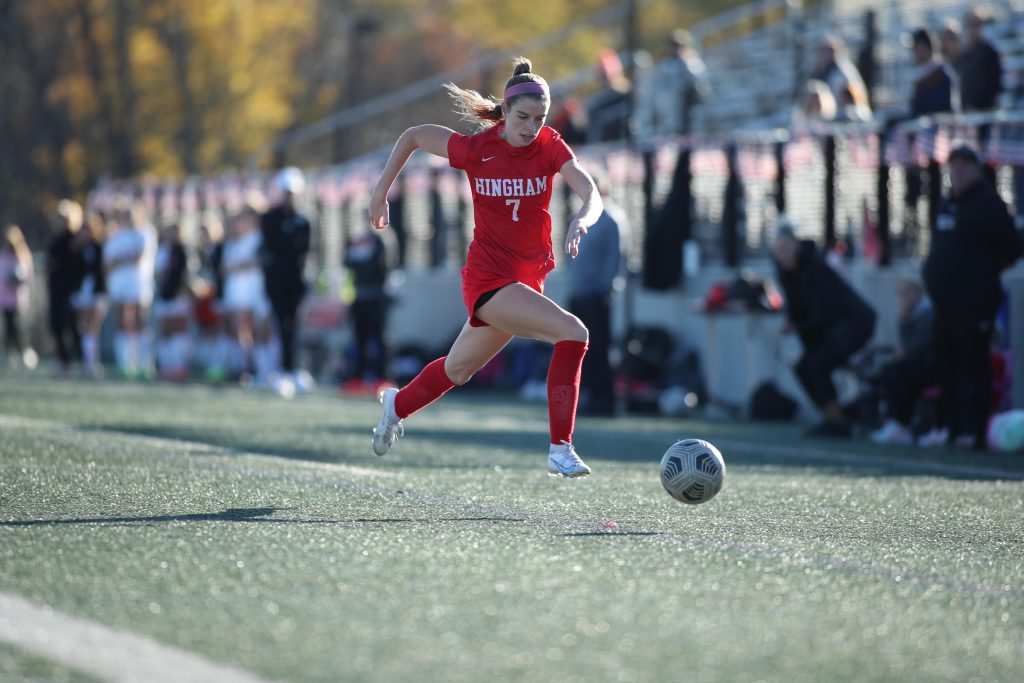 Junior Emily Gibbons races down the sidelines after a loose ball. 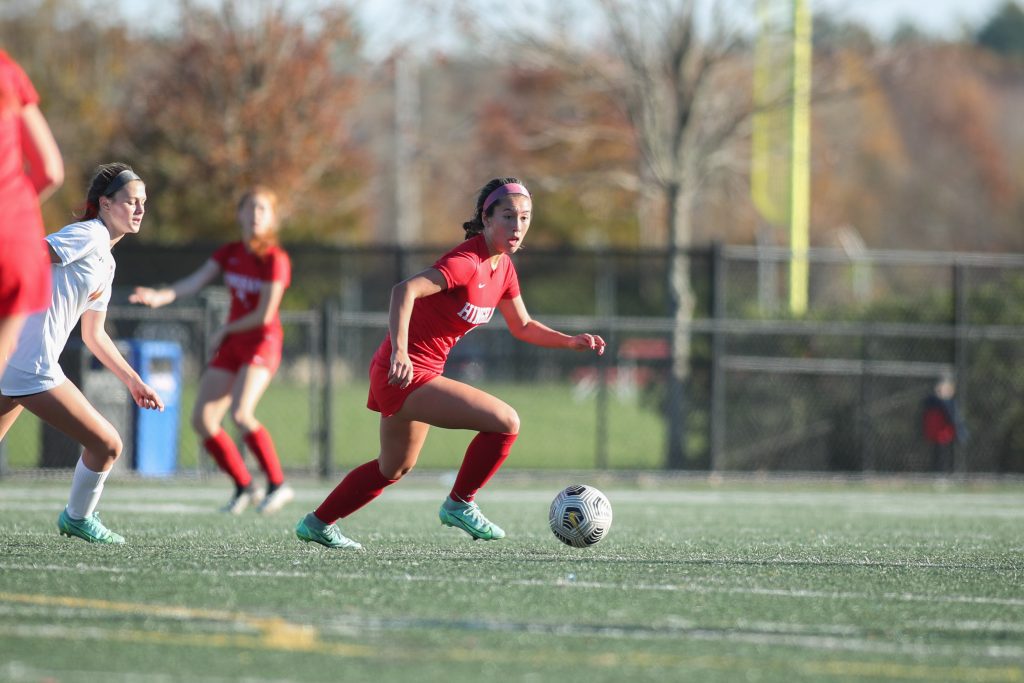 Senior Riley Cotter looks for her open teammate in the first half. 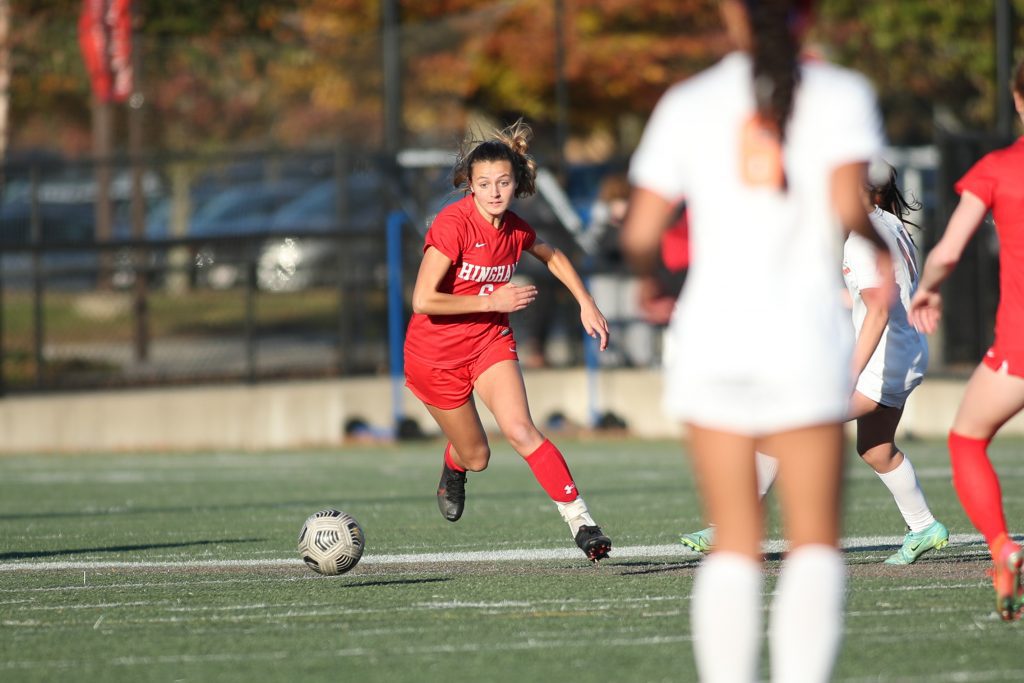 Junior Maddie Aughe dribbles up past midfield in the second half. 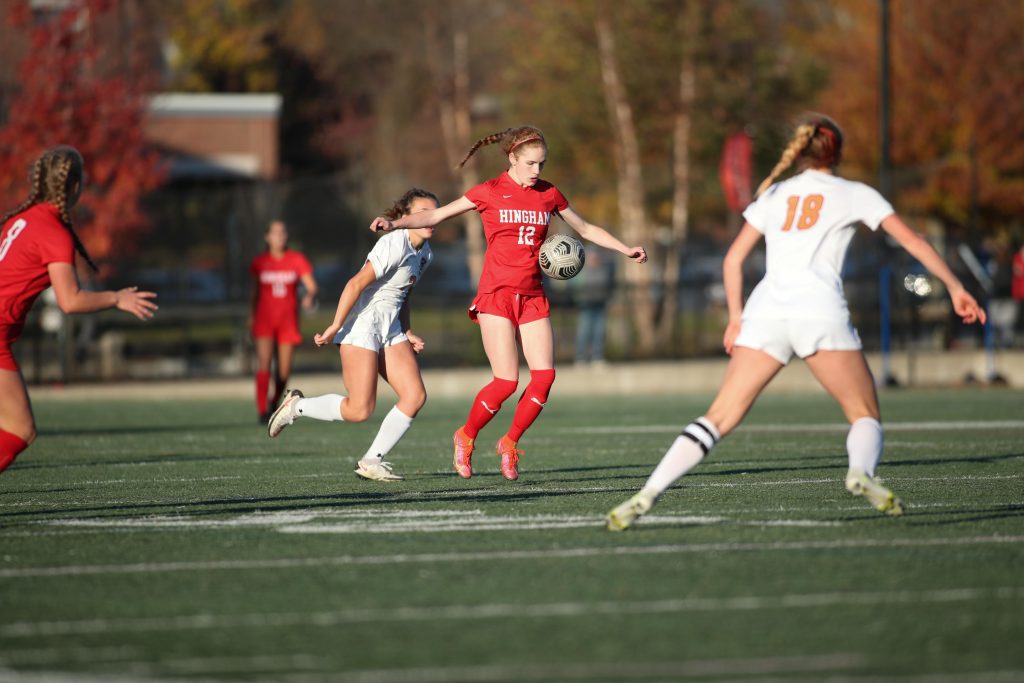 Sophomore Clare Murray stops a pass with her body late in the game. 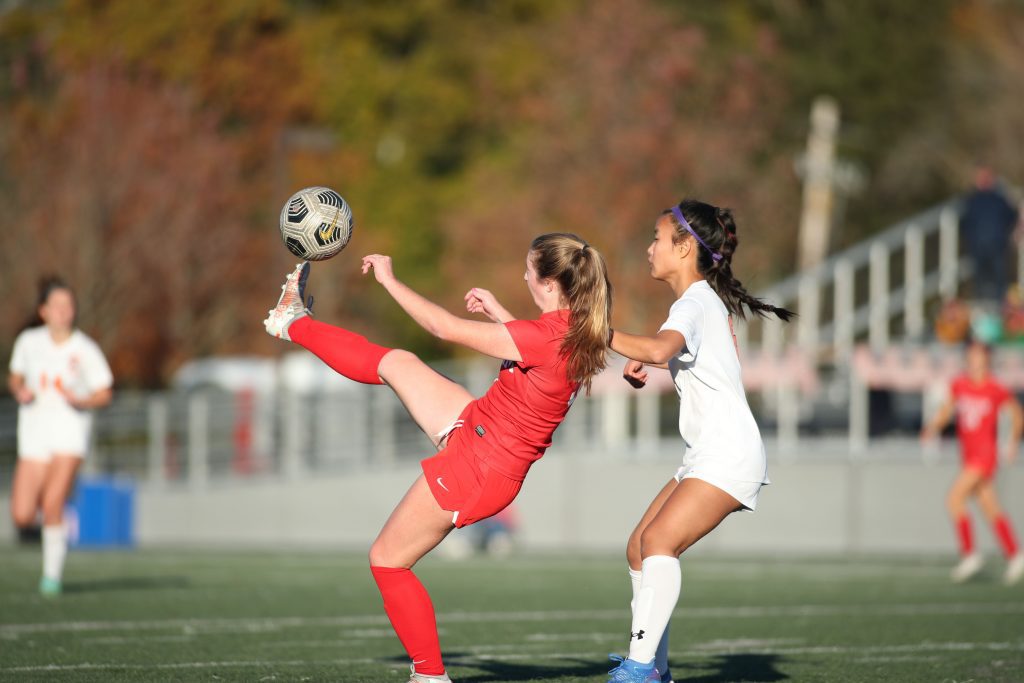 Senior captain Ava Maguire kicks the ball over her head towards the goal. 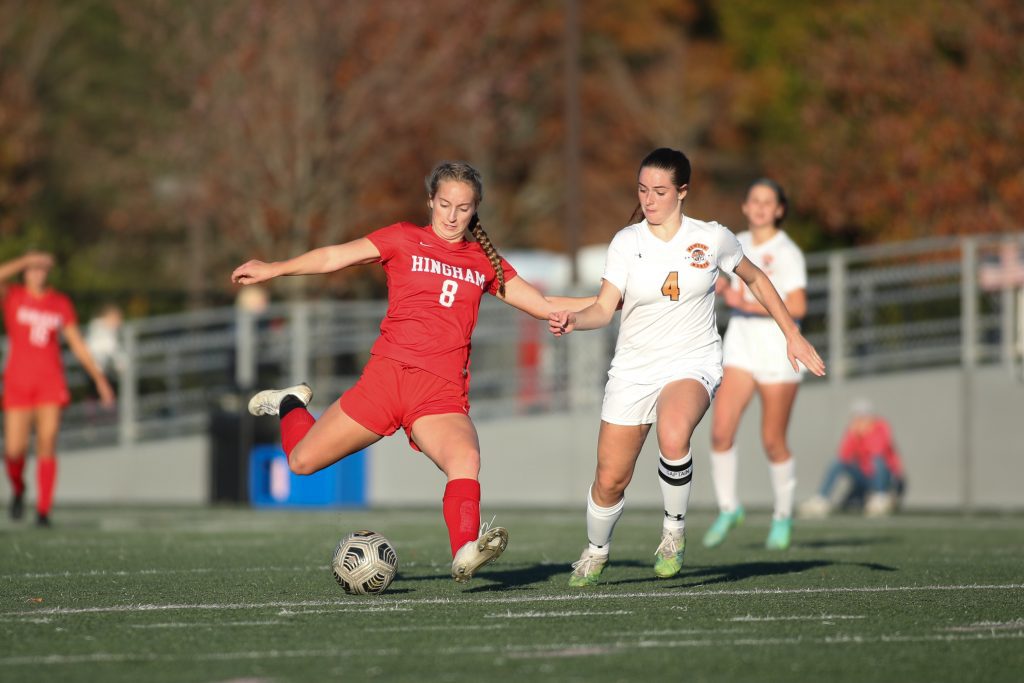 Junior Sophie Reale looking to add another goal late in the game. 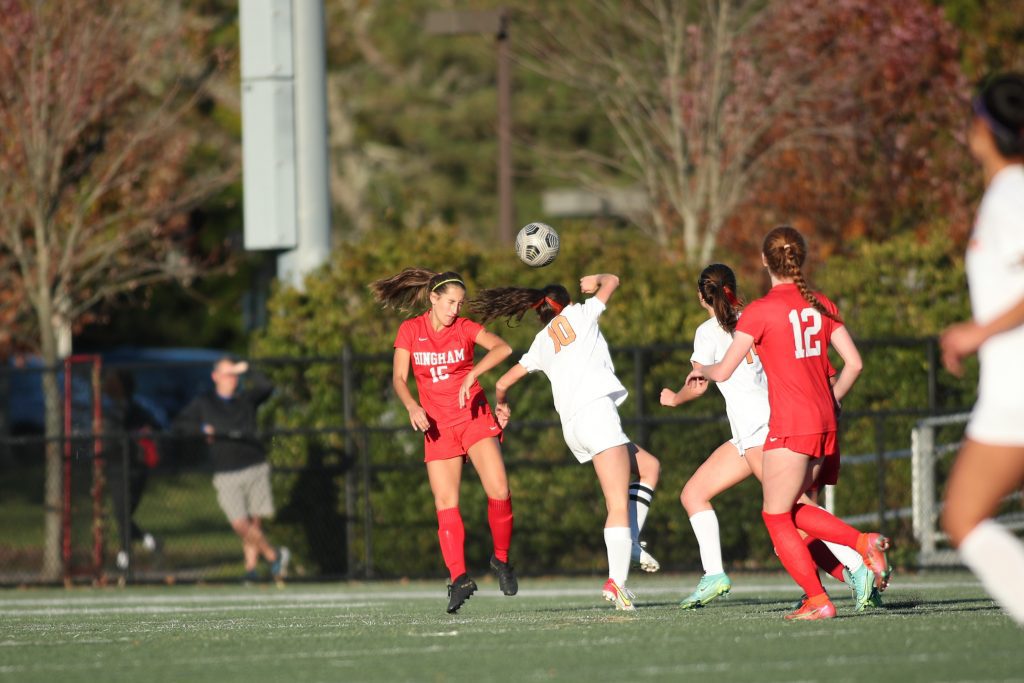 Senior captain Alexis Varholak clears the ball away from her net late in the game. 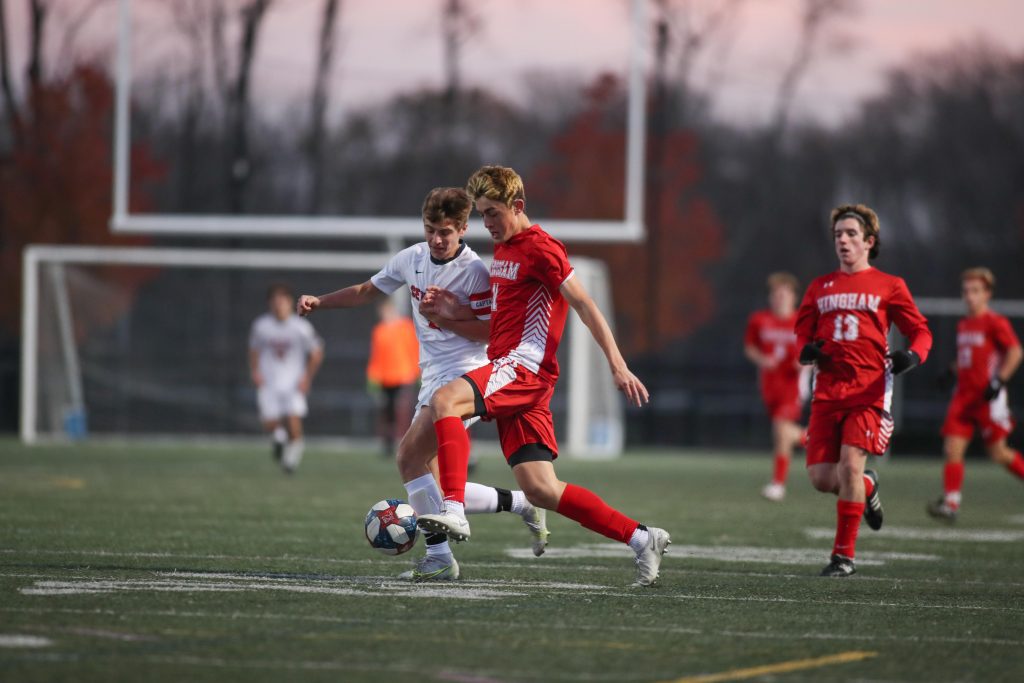 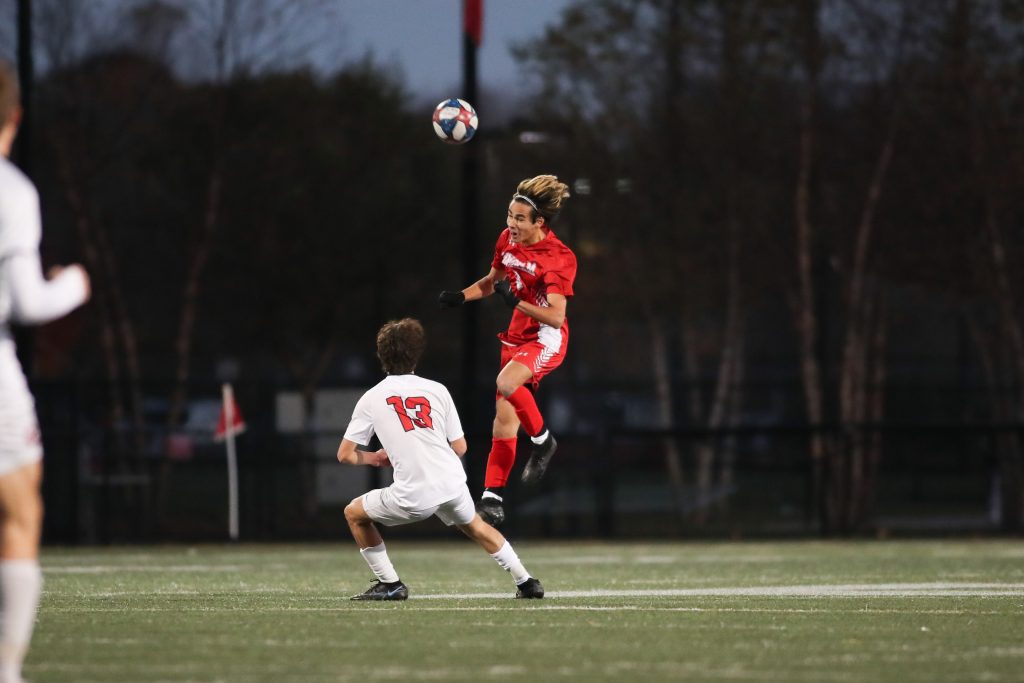 Senior captain Tetor Nghiem goes up to head the ball. 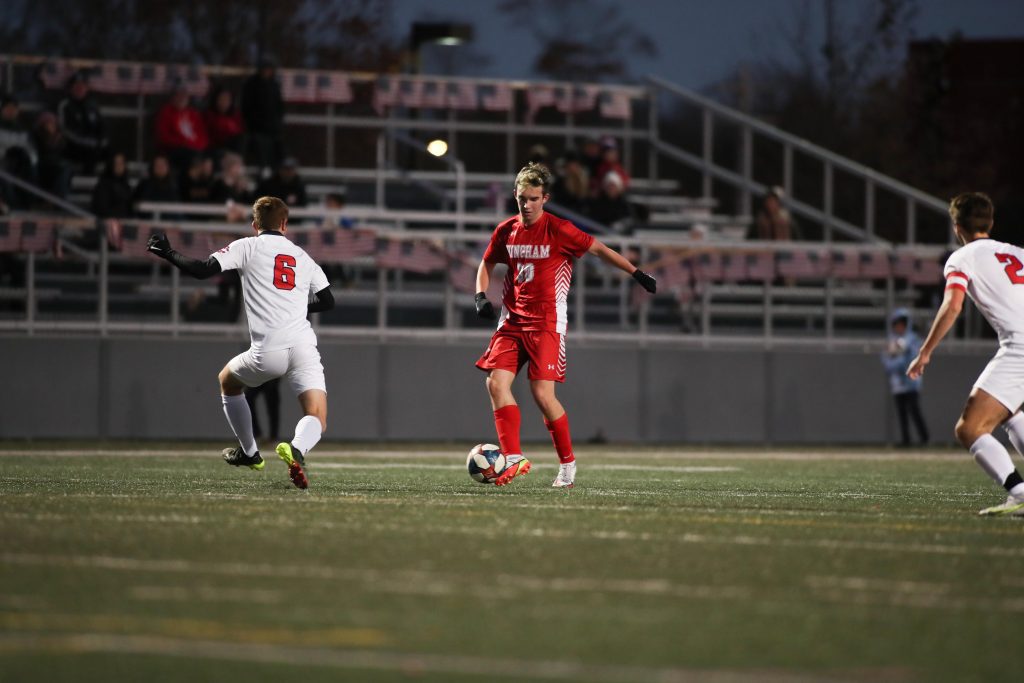 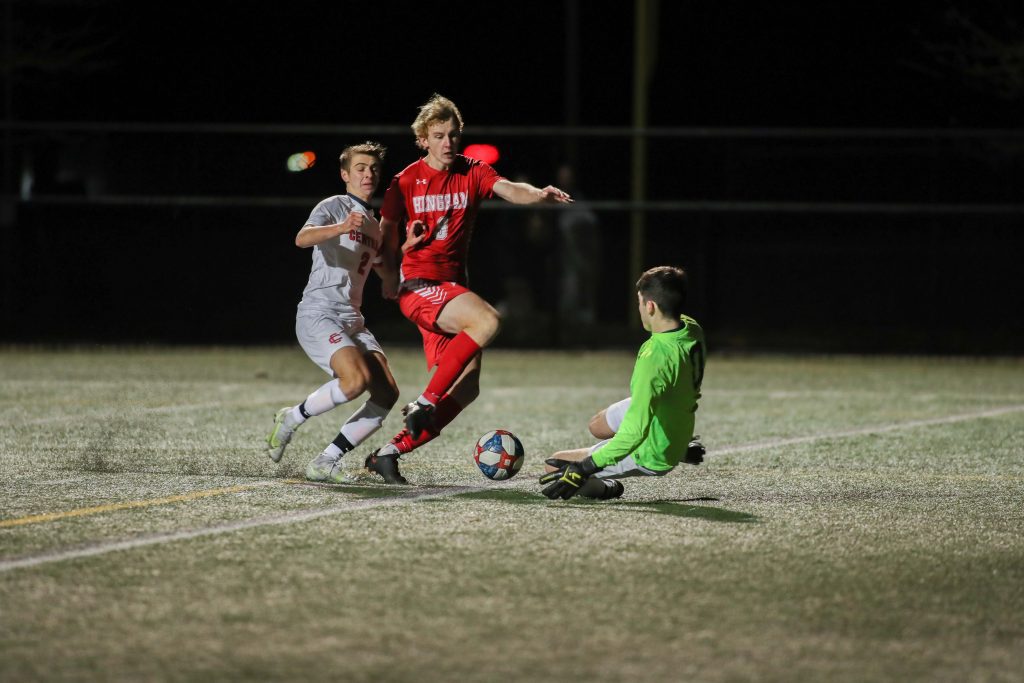 Junior Aidan Brazel almosts beats the goalie late in the second half. 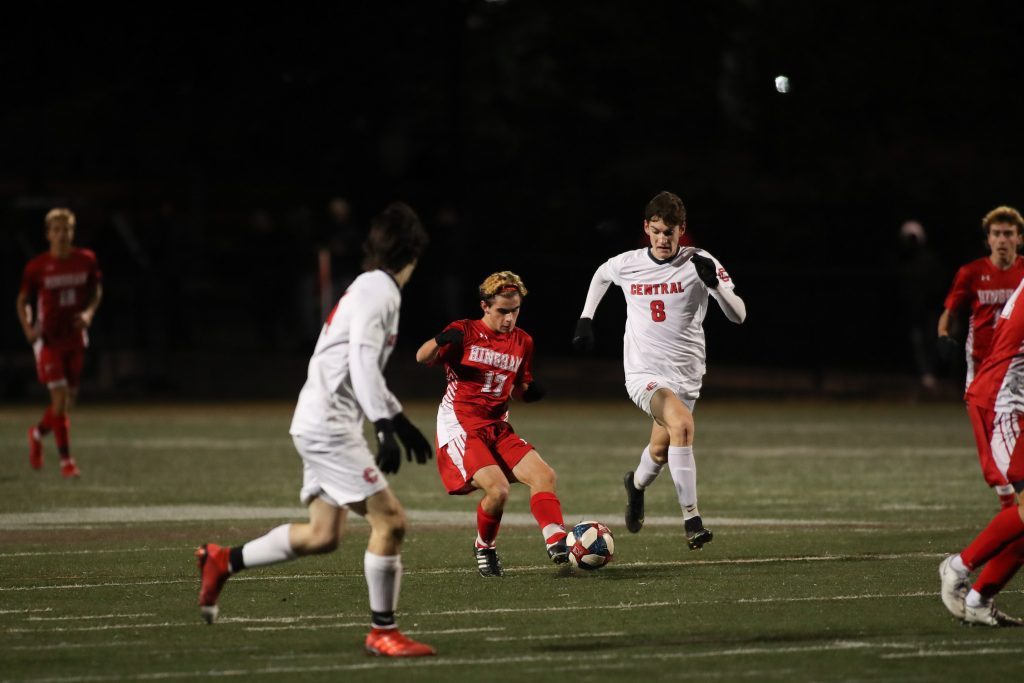 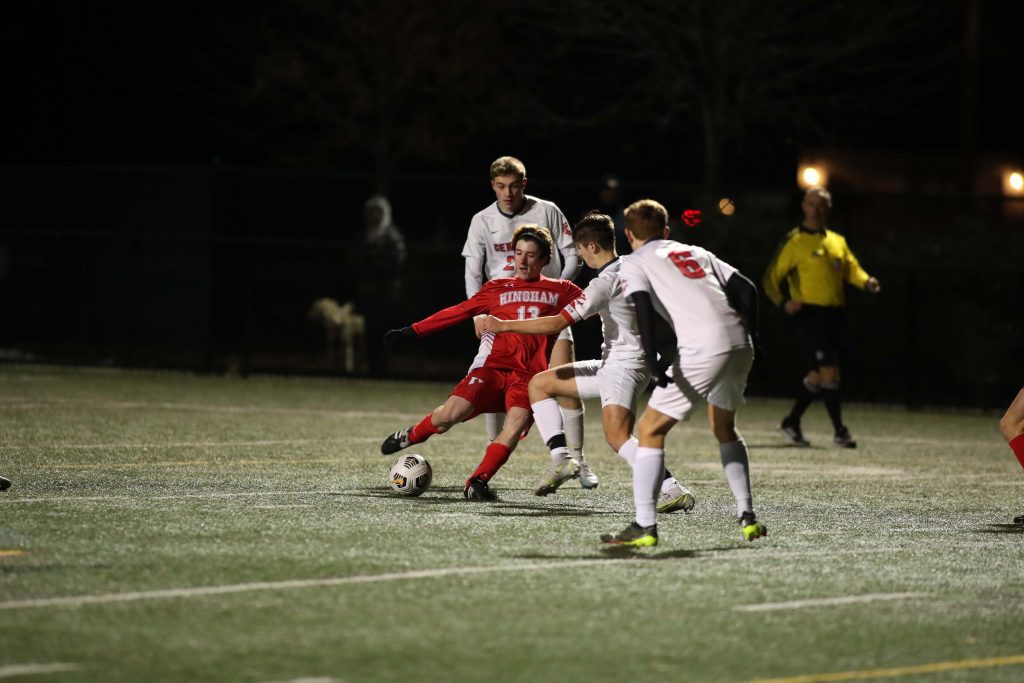 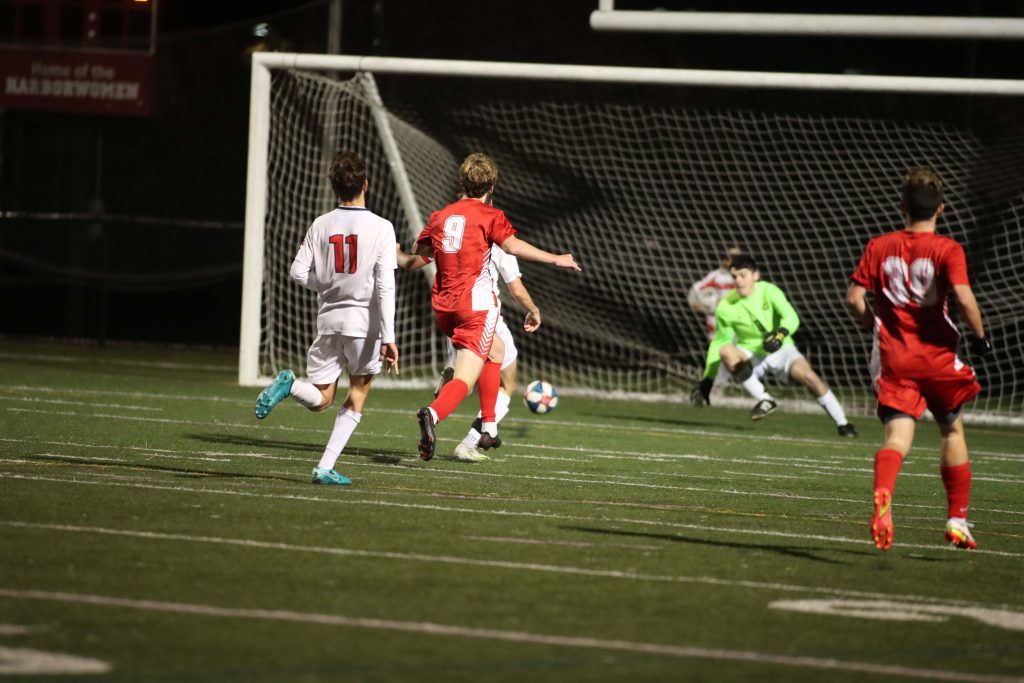 Junior Aidan Brazel doesn't early in OT to give Hingham the win. 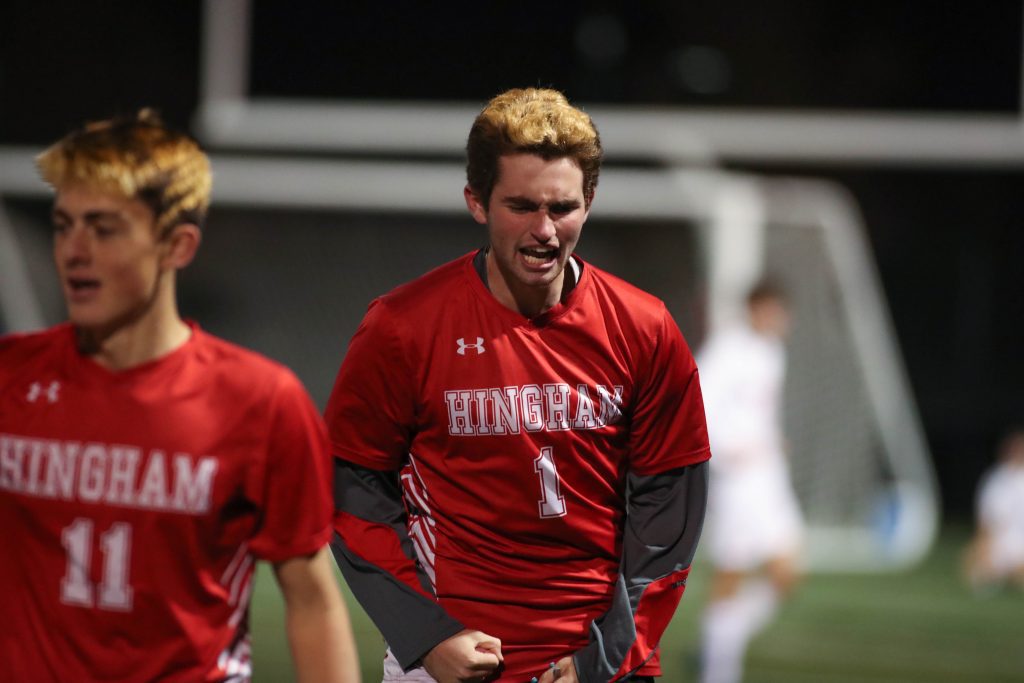 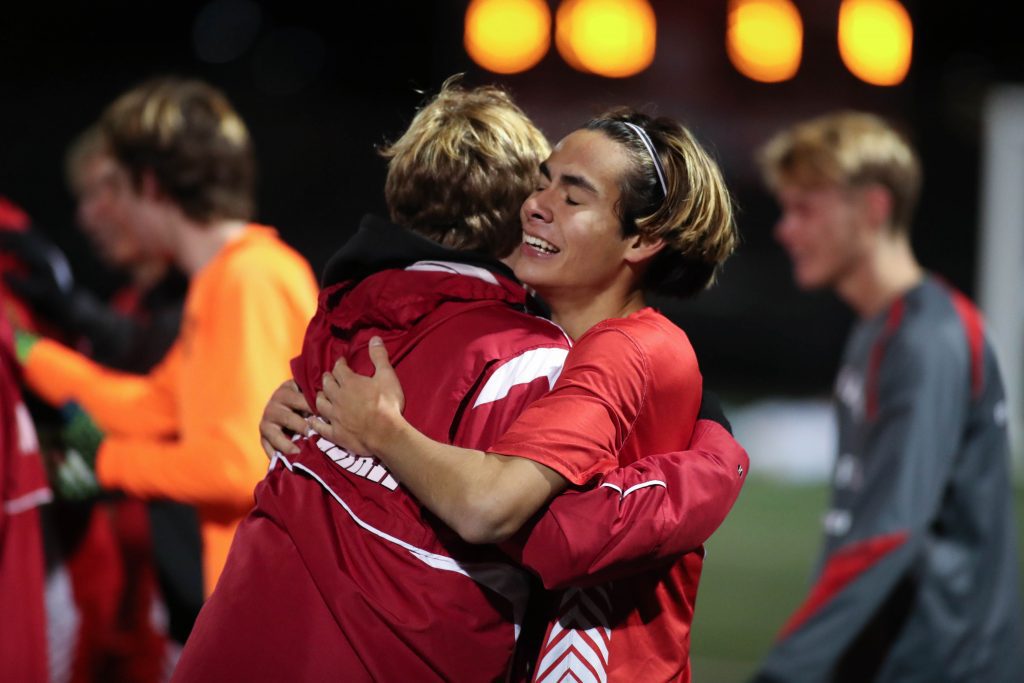