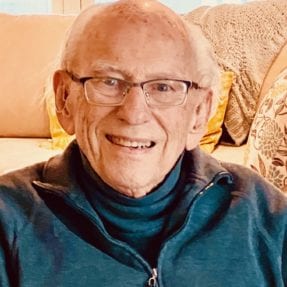 He was born May 10, 1931, in New York City, the first child and only son of Thomas and the former Nora Elliot, who both emigrated to America from Monaghan, Ireland. Later Mr. McKenna and his wife visited his parents’ hometown and met scores of his cousins.

Mr. McKenna attended All Hallows High School in the Bronx and Manhattan College in Riverdale, where he earned a bachelor’s degree in business.

During his school years Mr. McKenna worked as an usher at Radio City Music Hall. In 2013 he was proud to return to the mezzanine to watch his granddaughter cross the stage at her graduation from New York University.

He became a Certified Public Accountant and spent his career at various firms in midtown and downtown Manhattan. His work also took him to Boston and San Francisco.

He met Helen Schmidt, called Bunny by all who loved her, at a Catholic Youth Organization dance in 1959. He always said that when he first spotted “the girl in the red dress,” he knew he would marry her. Their wedding on June 4, 1960, was followed by a reception at the Fifth Avenue Hotel.

They settled in New Jersey to raise their family and spent 48 happy years together before Mrs. McKenna’s sudden death in 2008.

Mr. McKenna enlisted in the U.S. Air Force in 1953 and was commissioned a Lieutenant. He served in Texas and California as a gunnery officer before becoming a navigator. While in the Air Force Reserves he was promoted to Captain, a designation he was honored to share with his nephew Kevin Beatty of Atlanta.

In the early 1970s he earned his pilot license and rented a small plane at Ramapo Airport. On weekends he often flew his children above the Hudson River and over the family home in Emerson, N.J.

Back when moms took on most parenting duties, he was happy to be a very hands-on dad, who took his three children on countless outings and taught them to read, skate, swim, and more. Mr. McKenna was a sports enthusiast and an ardent fan of the N.Y. Jets.

With his wife he loved to travel far and wide, socialize with friends, and visit their native New York City for theatre and Sunday masses at historical churches. Later in life he enjoyed jigsaw puzzles, Sudoku, walks around his Oradell, N.J., neighborhood, and visits and holidays spent with family and friends.

Mr. McKenna leaves his three children, Carolyn of Devon, U.K, Kathleen of Hull, Mass., and Thomas of New York, N.Y. He also leaves his son-in-law Jim Brady, his three grandchildren, Louisa, Simon, and William Brady, and the nieces and nephews who are the children of Maureen Darby and Josephine Beatty, his sisters who died before him.

His family is grateful to the wonderful caregivers at the Village at Proprietors Green in Marshfield, Mass., and the NVNA & Hospice in Norwell, Mass., who treated him with love and kindness as he moved from this world to the next.

A funeral mass for Mr. McKenna will be held at St. Paul’s Church in Hingham on Friday, June 11, at 10 a.m. In lieu of flowers, please send donations in his memory to the NVNA (http://www.nvna.org).