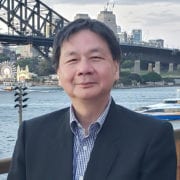 On Thursday, October 8th, 2020, Dr. David Kam, loving husband and father of three, passed away peacefully at the age of 64.

David was born on October 5th, 1956 to Kam Kwok Choi and Kwok Mu Kou in Hong Kong. In 1975, he immigrated to the United States to attend Stony Brook University, from which he graduated in 1978. He obtained his DMD and MD from Boston University in 1982 and 1985 respectively. He practiced otolaryngology in Weymouth, Duxbury, and Boston.

In 1984, he married Laura Mar. They raised two daughters and a son: Christina, Ariana, and Brandon. David’s children considered him to be their mentor and best friend in life. He taught them to always “be good” and “be generous.” He led his life according to these principles.

His passions included maintaining his home, listening to music, building computers, and organizing family trips to the White Mountains and Disney.

David was preceded in death by his father, Kwok Choi, and his mother, Mu Kou. He is survived by his wife, Laura; his three children, Christina, Ariana, and Brandon; his brothers, Kei and Fred; his sisters, Ching, Josephine, Katy, Angela, and Lucilla; nieces and nephews; and his colleagues and patients.

A private memorial service will be held this weekend. The family asks that any donations made in David’s name go towards supporting students in need at Boston University School of Medicine through the Medical School Lead Scholarship Fund.