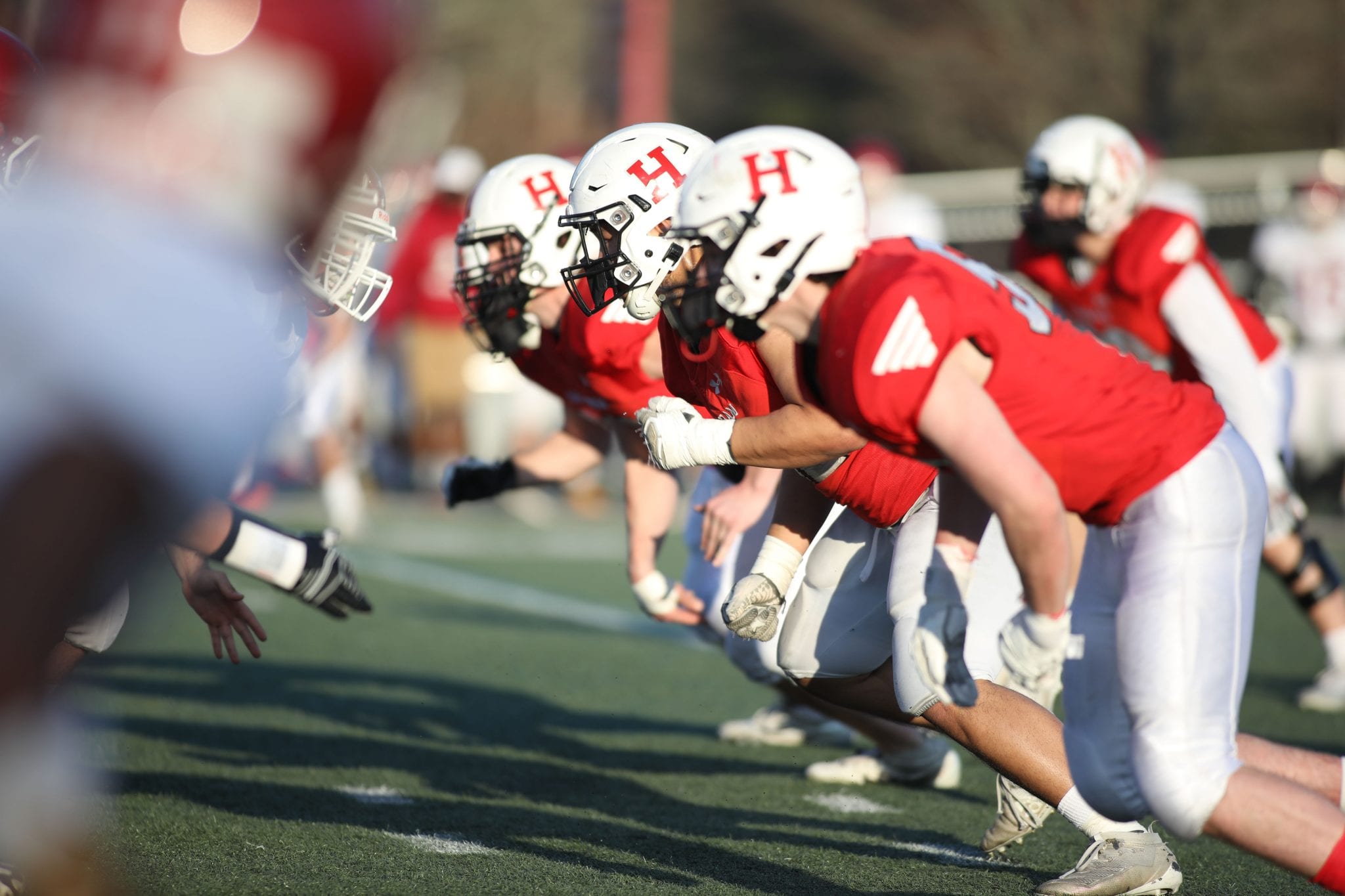 In a special Athletic Directors/Principals meeting on Thursday morning, the Patriot League voted 5-4 against allowing more fans in the stands for the football games this weekend.  The unusual split vote highlights the difficulty for the League and towns to come up with a plan to meet the needs of all members.

Hingham’s representatives, Athletic Director Jim Quatromoni and HHS Principal Rick Swanson, made their case to the other members for allowing student fans at the games this weekend.  Hingham will be hosting potentially their last home game of the season and they felt they owe it to the students and the players to make every attempt to get some fans in the stadium for at least one game this year.
“We owed the kids to do the work, to try and make this happen,” Quatromoni tells the Anchor.  “We came up with a plan that I thought was a nice first step that was going to work.  I went out and did the measurements and came up with the numbers and visualized what we would be doing there in the regular fan section.”

Hingham presented their plan to the League and unfortunately, it did not pass.  The AD/Principals typically only meet twice a year, so to call a special one  “recognizes the nature of the vote is significant enough” to call one.

This vote put the League at odds with what the state recommends for spectators.  Early last month, the EEA issued guidance to remove limits on the number of spectators at a game as long as social distancing can be achieved.  The Patriot League is made up of 12 teams, giving it 12 unique scenarios for spectator numbers.  Hingham has one of the larger stadiums in the League, giving them the ability to provide access to more fans than other Patriot League schools.

“By being part of the League, we agree to abide by the Patriot League Handbook and the votes that occur in the Principal/AD meetings and the AD meetings, ” Quatromoni says.  “There are positive and negatives about being part of a league, but the positives far outweigh any of the negatives.  So you can’t just choose which rules to follow and which you don’t.”

Principal Swanson is also disappointed in the League’s vote and issued this statement to the Anchor.

"I'm very eager to see Hingham students back in the stands at our home games, and I want that to happen as soon as possible, which is why Jim Quatromoni and I tried to amend current league regulations at the Patriot League meeting on Thursday. I'm convinced that we could open a section of our bleachers to a limited number of students, distribute the tickets in an equitable manner, and supervise the section in a way that ensures compliance with all safety protocols. Unfortunately, our efforts to allow a limited number of student fans at Patriot League contests next week were unsuccessful. Our proposal fell short by a single vote at the league meeting. It's disappointing for me and, I'm sure, to our fans, as well, but as league members, we have to honor the outcome of that vote. However, this is only a temporary setback. I'm very confident that Hingham students will have the chance to attend home games during the spring season. We can all look forward to that and to the renewal of school spirit that will come with it."

“The State’s decision to allow localities to safely open games to students was a welcome development,”  says Bill Crean, parent of three HHS football players. “It is disappointing that principals in the Patriot League can override our athletic director and principal’s plan at Hingham High School to provide our kids some return to normalcy.”

The inconsistency throughout the towns, the state, and the different sports seasons, coupled with the students returning to full buildings for in-person learning, leads to frustration by students and parents.

“It’s been a very tough year plus for all students,” says senior football player Patrick Petrillo. “It would be great if we had something that would bring us all together in a safe and responsible way. The football team definitely thrives on fan support and it would be great to have the students cheering us on.”

Senior class president Cameron Frank echoes Petrillo’s thoughts and feels that some students should be allowed to attend games.
“I am so grateful that principal Swanson and coach Q(uatromoni) are trying to get student spectators back in the stands,” Frank says. “Part of what makes our town and schools so great is that we all come out to support and cheer for each other.  School spirit is one of the best parts about being a student at Hingham High. It would be a huge morale boost to come together again before the end of our time at HHS and cheer for our town and our teams.”

Friday’s game vs. Whitman-Hanson is the last scheduled home game this year for the Harbormen.  There is a possibility of a home playoff game, but that is not guaranteed.  While the decision to not allow non-family fans this week is pretty much set in stone, Quatromoni says that he is hoping the League continues to meet and make appropriate adjustments as situations change.