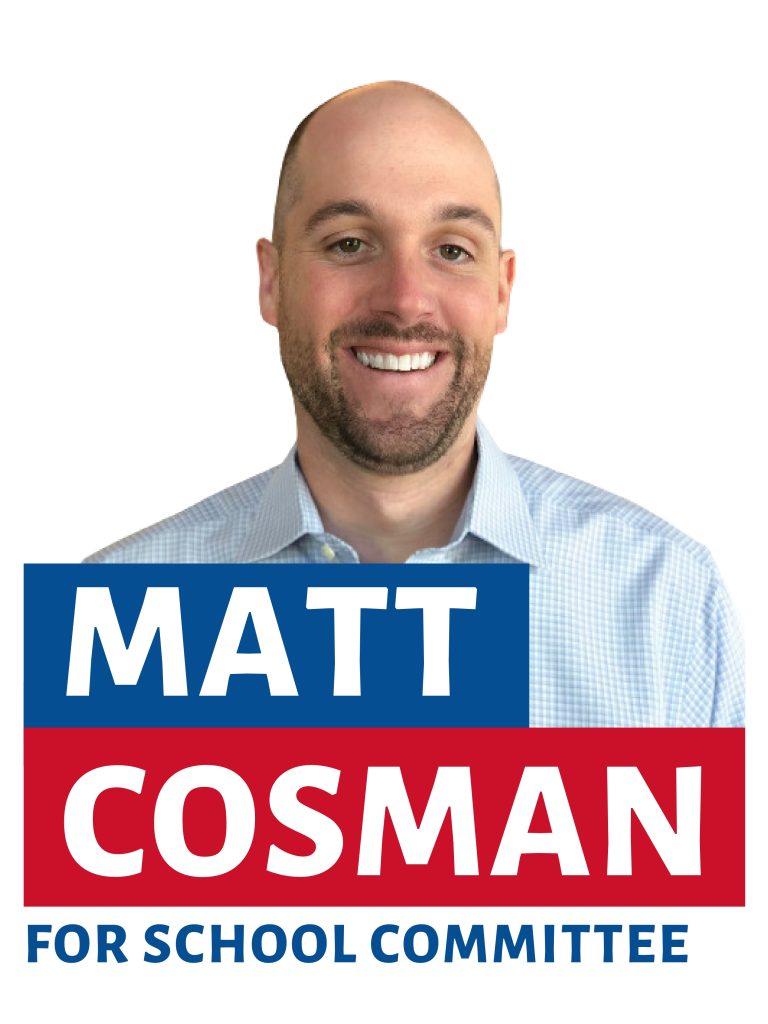 It is with great pleasure that we endorse our son, Matt Cosman, for Hingham School Committee. As Hingham residents for 38 years, who have known Matt longer than anyone, we can say with the utmost confidence that he is an exceptional choice for this very important role. If elected, Matt’s intellect, his lifelong talent for data-driven problem solving, his professional experience as a unifying relationship-builder and business strategist, and most importantly, his integrity, will serve Hingham well.

The Town of Hingham and its strong school system have been central to our lives. We moved to Hingham just before Matt started Kindergarten at South Elementary. On his first day of school, we were greeted warmly by beloved Kindergarten teacher Mrs. Goldstein (chicken hat and all), creating an auspicious start to Matt’s Hingham school life. Matt thrived in Hingham schools from that first day through his time at Hingham High School, where Mr. Kirkcaldy inspired him to study history at Colgate University.

Matt’s innate ability with numbers, his talent for building relationships, and his love of community were apparent early on. With the same ingenuity and drive that he exhibits professionally and in his volunteerism today, he combined these strengths with his love of sports as a child. By second grade, he began to produce reams of spiral-bound sports statistics to pore over with friends. For his tenth birthday party, he organized an impressive tennis tournament at the Middle School. When he was unable to play in several Barker basketball games because of minor surgery, he became an “assistant coach” for the team. Matt knew the importance of being engaged and contributing even when he couldn’t play. Later, Matt worked at the Town Rec Center as a counselor and tennis teacher. It was the perfect summer job for a teen - sports, sun, fun, and his first paycheck. What he most enjoyed, however, was working for kids in the community to help them have the best experience possible. Exactly what he intends to strive for if given the opportunity on the School Committee.

Matt’s community mindedness and good work for kids has continued into his adulthood. He coaches multiple Hingham youth sports teams and is a tireless advocate for Hingham’s students and schools. His wife Emily, a long-time special education teacher, is also very involved, co-chairing Hingham’s Special Education Parent Advisory Council (SEPAC). Our three grandchildren attend Hingham Middle School and Foster Elementary. Matt and Emily are loving, busy parents. Yet they both make the time to give back to their hometown.

Matt has always been passionate about education and has always cared deeply about this community. He would be honored to receive one of your three votes for Hingham School Committee on May 14th. If you vote for Matt Cosman, you will be voting for a hardworking and committed representative who will be a strong advocate for all students. He will work collaboratively with parents, educators, fellow committee members, and Town leaders to make the best decisions for our kids. Matt will take concerns and hopes to heart, and will do his best for all.