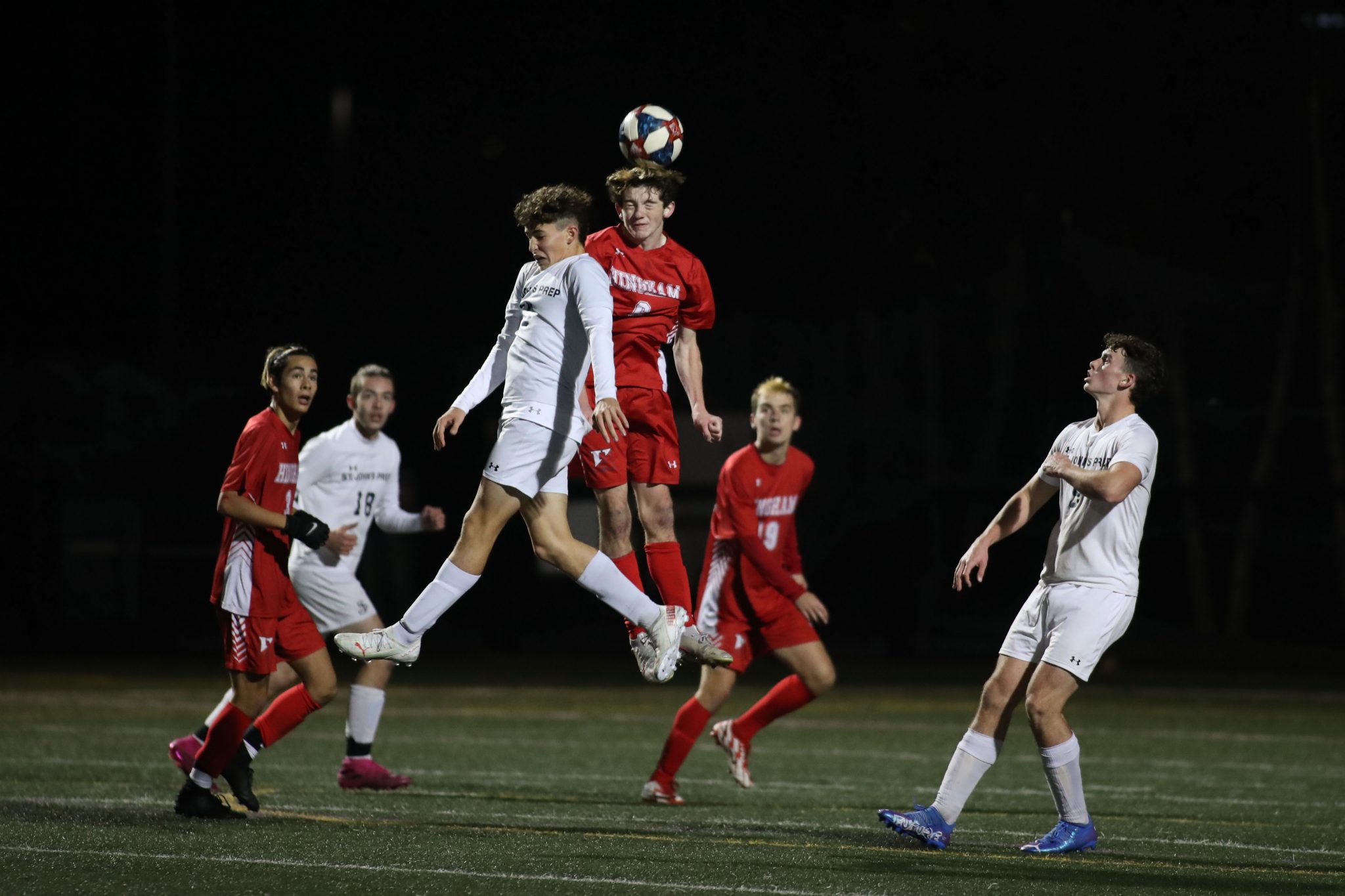 Junior midfielder Griffin Coppola scored the only Hingham goal in their 2-1 loss to St. John's Prep.

The boys soccer team’s season and championship hopes came to an end Tuesday night against St. John Prep.  The Harbormen couldn’t overcome an early two goal SJP lead, which was their biggest deficit all year.  Both goals seemed to have come on either miscommunication or just bad touches, both of which are very uncharacteristic for this team.

As well as the defense and senior goaltender Jack Price has played all year, the offense seemed to have sputtered the last few weeks and it hurt them on Tuesday when they couldn’t get one more goal to tie it up after junior Griffin Coppola headed one in to cut it to one.  The Harbormen outplayed the Eagles for more than three-quarters of the game. They had their chances, but the balls weren’t finding the back of the net.

“For 13 minutes we didn’t play very well and for the rest we were trying to play catch-up,” said coach Ken Carlin after the game. “They’re a good team.  They move the ball real well and they had an advantage of a two goal lead.  It’s hard.  It’s hard in a playoff game.  They just need to defend and they did.  They pulled back a little bit and they did what I would do if I was in their place.”

It’s a difficult pill to swallow, especially as the top seed in the state.  Hingham cruised through the Patriot League this year, only losing to Marshfield by a score of 1-0.  This was the second week in a row where they have faced a Catholic School in the tournament.  One could argue those schools have a harder schedule throughout their season and are more prepared for the tougher competition they face in the tournament.  There’s also factor of the new tournament format and seeded.  The verdict is still out on whether it’s a better system than in previous years.

Expectations were high for this veteran group, which consisted of 19 seniors.  A majority of the team has played together for a very long time and it paid dividends this year.  Carlin looked at the unusually high number of seniors as a positive.

“It was somewhat related to the COVID thing,” explain Carlin. “We had players who didn’t play last year because of COVID and their families.  So we had more players than I guess we normally have because we weren’t going to not take someone who didn’t play as a junior in a COVID year.  So this was fun.  I would have to say some people may say it could be a problem, but it wasn’t. This was a fabulous group who played really super hard in practice to make the players who play in the games sharp.  It was a terrific season.  Not a great ending, but a terrific season.”

This group of seniors, led by captains Brian Odell, Curtis Murphy, and Tetor Nghiem, finished as back to back Patriot League champs and carried the top ranking in the state for the fall.  While the sting of losing may linger a bit, they should be proud of what they have accomplished throughout their high school careers.

So while the vast majority of his team is leaving, there is a core group of juniors who will be returning next year, including starters Cole Sampson, Aidan Brazel, Jack Murtagh, and Griffin Coppola, who are all impact players.  And even though he will have many first time varsity players starting next year, Carlin’s hoping they can build off of this year and continue the winning seasons.

“Everybody wants to do better,” he finishes by saying. “We won the league.  We did a lot of good stuff.  Whatever this new system, we were number one for all of the fall.”