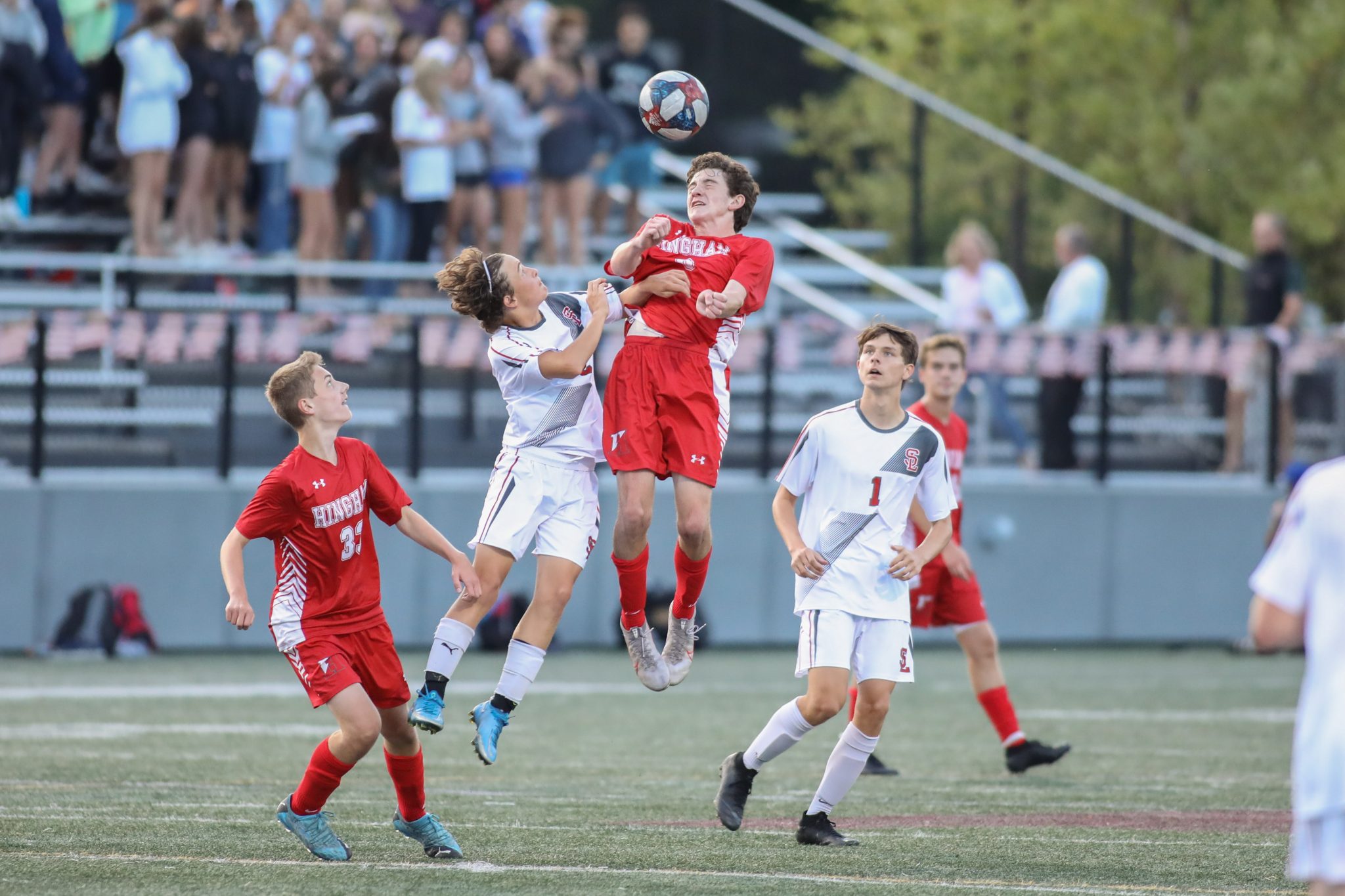 The Hingham boys soccer team is off to a hot start in defense of their Patriot League Championship with two convincing wins to start their season.

The boys took care of Scituate in their season opener on Friday 4-1, with goals from senior Christopher Bradley and juniors Cole Sampson, Aidan Brazel, and Griffin Coppola.  Last night, they continued right where they left off scoring 2 minutes in against Silver Lake on a Brazel goal.  Sampson buried one 6 minutes later on a penalty shot to give the Harbormen a quick 2-0 lead.  Two more goals by senior captains Tetor Nghiem and Brian Odell in the opening 40 minutes gave Hingham the commanding 4-0 lead at halftime.

The second half was much of the same dominance.  Great defense and a couple of great saves from senior goalie Jackson Price kept the Lakers at bay.  Hingham was too much for Silver Lake, winning easily 5-0.  Coach Ken Carlin emptied his bench in the second half giving everyone a chance to get some in-game experience.  As defending champs, Carlin knows that he will need everyone to stay focused and be prepared to continue last year’s success.

“Everybody’s going to bring their “A” game when they play you,” Carlin tells the Anchor after the game. “Historically, I think we are a team people like to beat.  They play hard and we need to make sure we don’t rest on our laurels, reading our press reports, and thinking if we show up it’s going to be a win.”

So far, the players have taken their coach’s advice to heart early in their season, which not only makes him happy, but makes his job easier.

“We scored some goals really early,” say Carlin. “It’s easier to control the game when you have a couple of goals.”

The early leads have been the result of starting off games with lots of energy and urgency.

“Their intensity,” Carlin answered when asked about the thing he liked most about the team so far.  “We move the ball really well.  We possess really well.  We have a lot of speed and we use the whole field, which is trouble for other teams.  Our secret is to use the entire field.  We defend well.  We exploit their backs by going wide.”

Senior captain Brian Odell tells the Anchor that the results on game days start with the work put in at practice.

“Everyone at practice is giving 110%,” Odell says. “Even the players on the bench who don’t get as much (game) time, they’re working their tails off right now and by them working hard, we all get better as a unit and that translates to the field.  You play as you practice.  It’s as simple as that.”

Both Carlin and Odell note that while games and practices are intense, it’s the intangibles that’s really contributing to this team’s early success.

“We have a lot of team chemistry,” says Carlin. “I think if you ask the kids, they have a lot of fun.  And that’s part of this.  This is a team that we look to have fun playing.  I think it spreads around the school that this is a good place to be, we have fun here, and we are successful.”

“We’re all really close childhood friends,” he says. “It really is a dream to be out here playing with kids I’ve been playing with for 10 years.  We all have that chemistry. It’s so much fun.  I love to see everyone play especially since so many of these guys, like I said, work their tails off in practice.  So it’s nice to see them get rewarded for their hard work.  It’s nice to see Tetor (Nghiem) and Curtis (Murphy) get a breather.”

Coach Carlin has always run a successful program - a winning percentage of 71% over 22 years, but might have gotten lost with some of the higher profile sports in town.  The program, along with the girl’s program, are making their case to be one of the sports not be overlooked in town.

The boys look to keep the ball rolling Friday in Pembroke to take on the Titans. 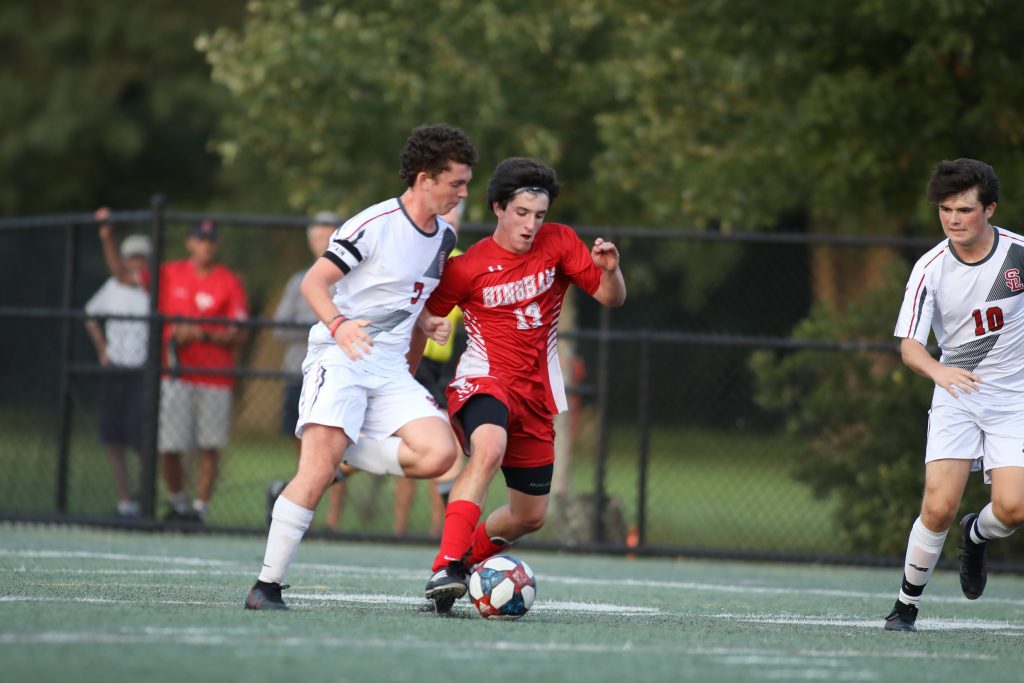 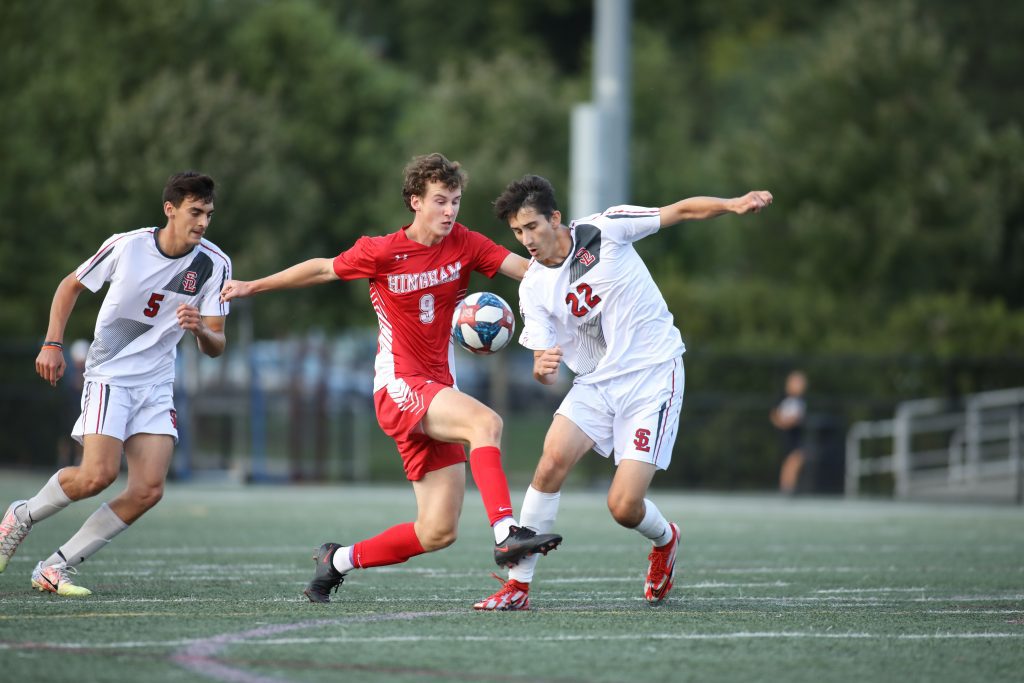 Junior Aidan Brazel, one of many returning players looking to continue the program's success. 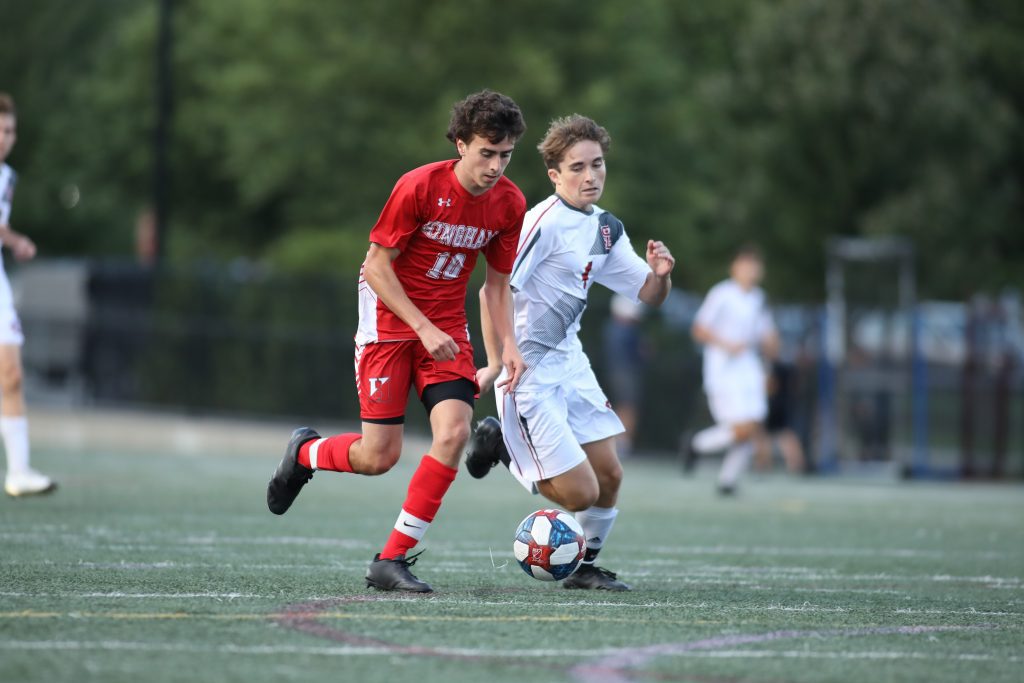 Senior midfielder Brian Dalimonte is one of 19 seniors on this very experienced team. 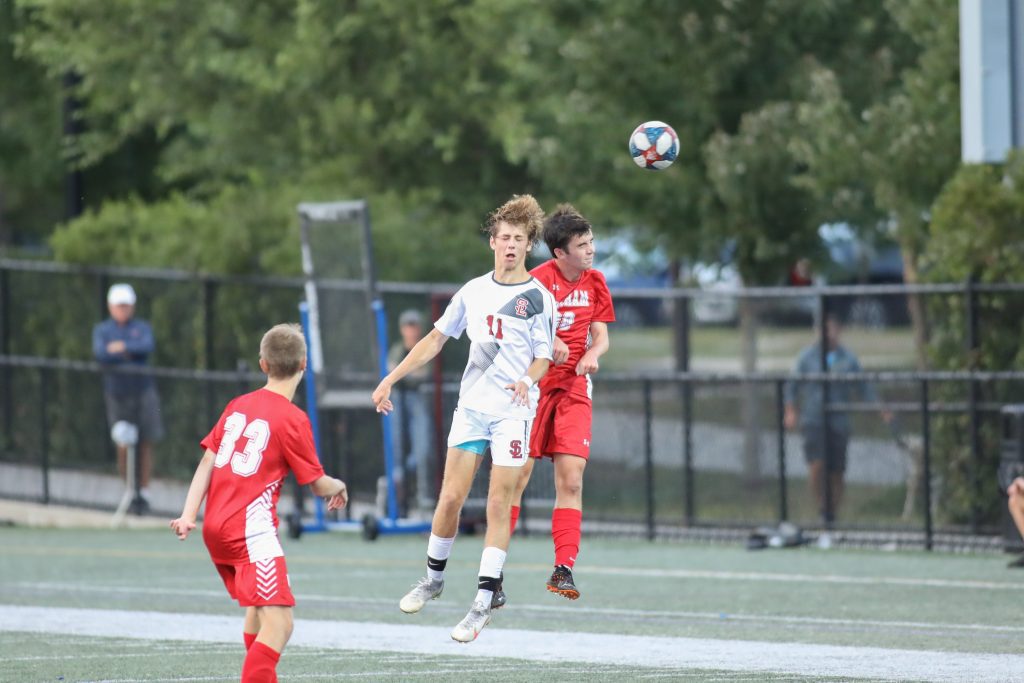 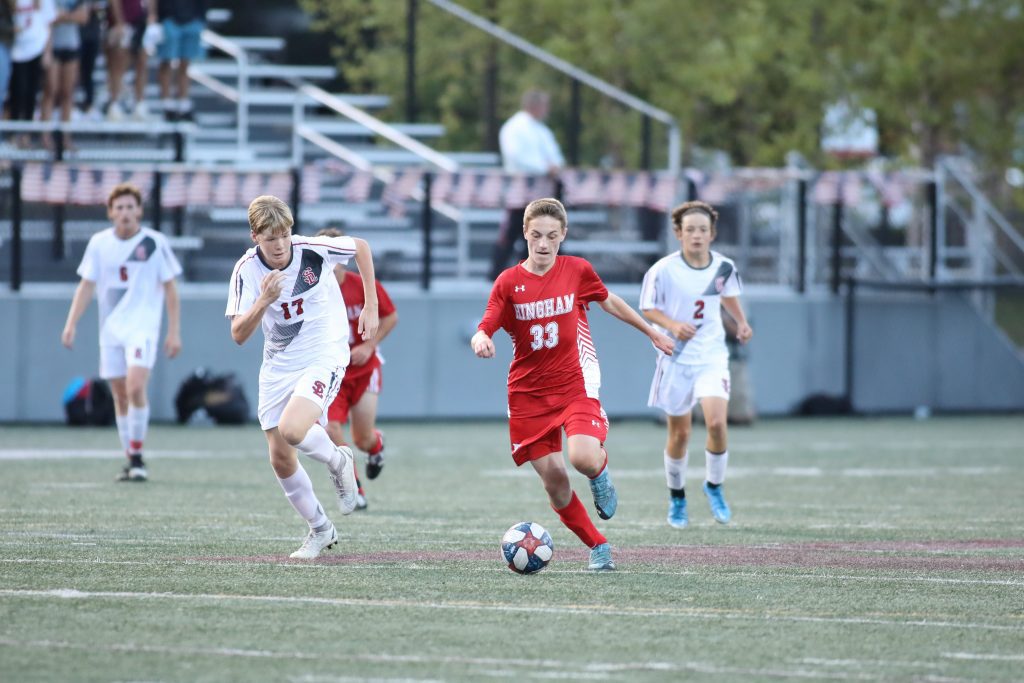 Senior Matthew Carr looking to push the Hingham lead late in the first half. 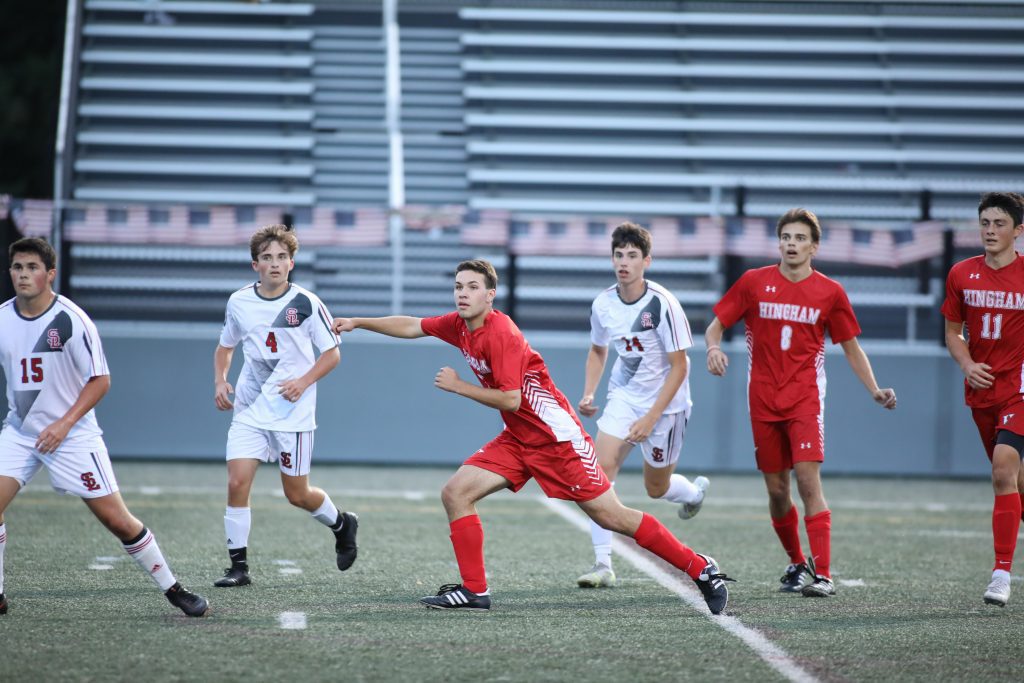 Junior Sam Benham breaks to the net on a corner kick. 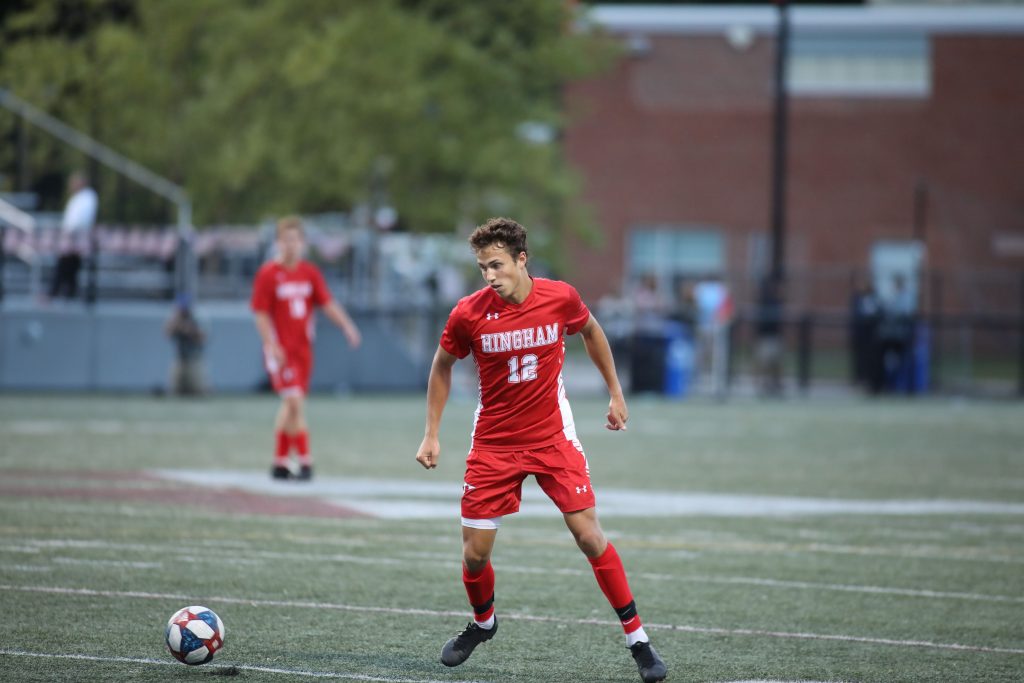 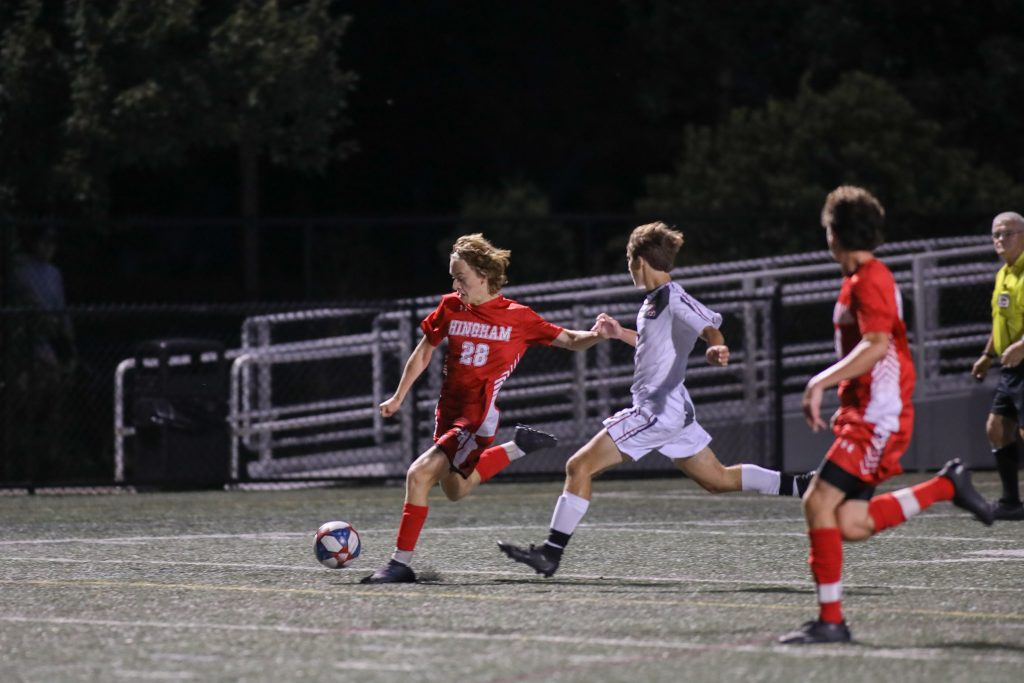 Crowd favorite senior Billy Burns made his way into the game in the second half to a loud standing ovation.