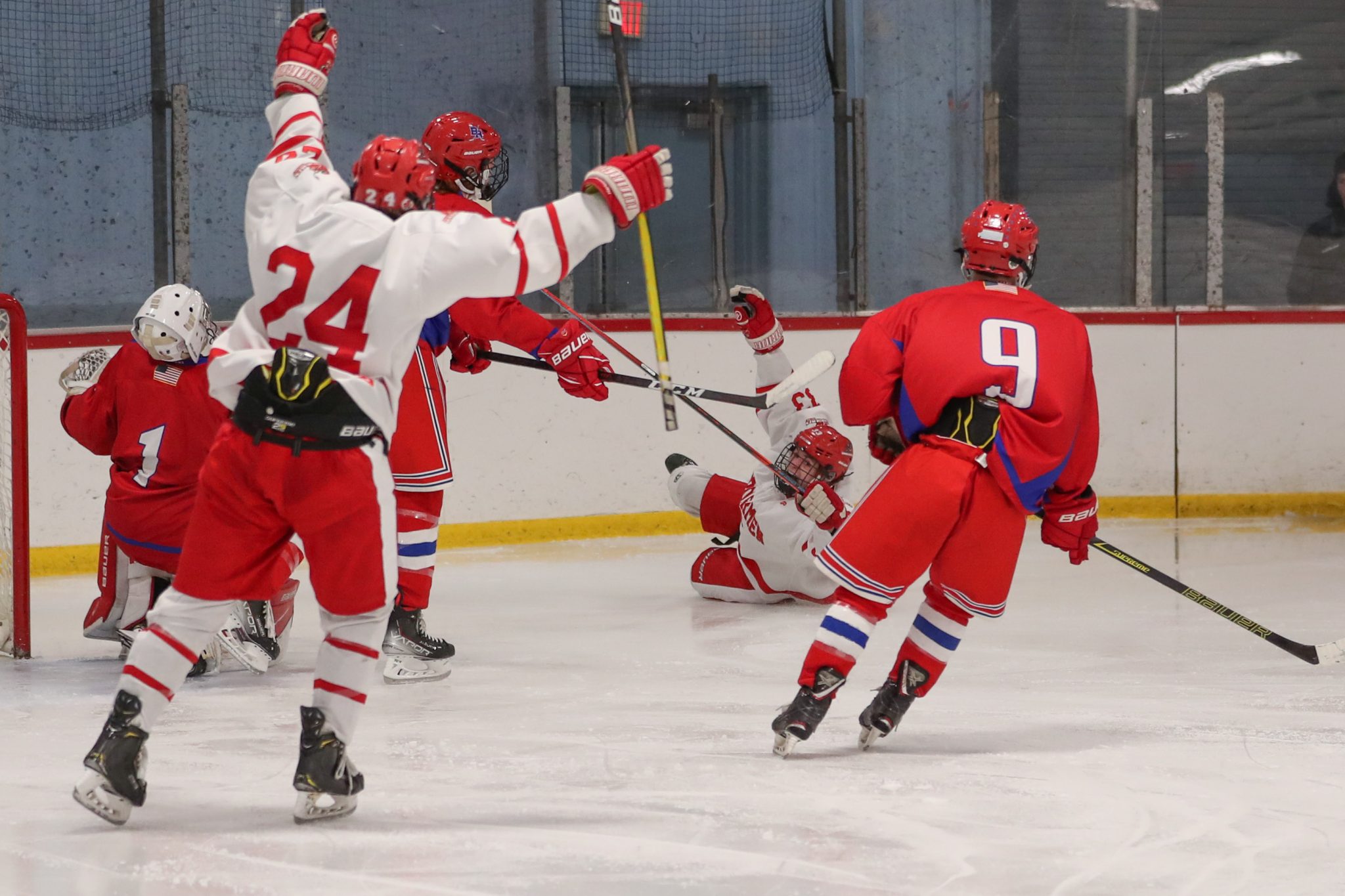 Senior Alex Barzowskas scores from his knees and slides into the boards to give Hingham the 2-0 lead in the third.

The boys hockey team was back on the ice Wednesday night to kick off their 87th season.  And for the first time since the 85th season, the arena was packed with fans.  They are coming off a Patriot League championship and are back to an independent schedule this year.  The team is anchored by senior captains Drew Carleton, Sean Garrity and Bobby Falvey.  With the Super 8 tournament on hold for a few years, the team is looking to make it far in the new state tournament format.

They started their season with a home match-up against a scrappy Bridgewater-Raynham team.  It took about a period for everyone to get their skates under them, but things picked up in the second.  While it took almost the second period to get on the board (Carleton with 3:30 left in the second), Hingham dictated the play the whole period.  Most of the action was in the Bridgewater-Raynham end with multiple chances as the Harbormen’s play picked up.

The third started with a goal from senior Ryan Burns and continued with goals from junior Alex Barzowskas, Garrity, and junior Aidan Brazel giving Hingham the 5-1 win. The veterans definitely stepped up in the game to pull away from B-R and head coach Tony Messina is happy with what he saw with the whole team.

“I think we were playing well in the first part of the game too,” Messina said after the game. “We were talking about getting to the net more, in front for traffic.  The goalie was seeing all the shots and they were content to play a strong defensive zone.  They were packing them around the net.  Any team that does that is hard to score on.  We missed the net a lot and didn’t capitalize on the chances we had.  In the third, I think they got a little more tired, we use more players than them, and that was the difference I think.”

With 16 returning players this year, there is a lot of experience on the ice that helps in game like this one.

“They contributed,” answered Messina when asked about his veteran players.  “That’s what we are looking for, right?  We got a good group, a good nucleus, but we also have some good young kids as well.  It’s a good team as far as all the kids getting out there.  We’ve spotted the 5th and 6th defensemen and we are going to ween them in as we go along and see what we got.  Goaltending was good as well.”

Senior tender Luke Merian make 9 saves, only allowing a PP goal.  Merian and the rest of the team hit the independent league schedule early as they take on St. John’s Prep this Saturday at 2pm at the Essex Sports Arena.

“They’ve got to realize that tight defensive zone coverages is key when playing some of these great Catholic teams and all the strong teams on our schedule,” Messina said looking ahead to their upcoming games.  “That’s the way we like it.  Toughest schedule we can.  The kids look up to it and get ready for it.  And hopefully we are up to the challenge.”

“We did hear lot of ‘it’s great to be in the barn again’ with lots of people.  It’s a nice feeling to be back,” he added. 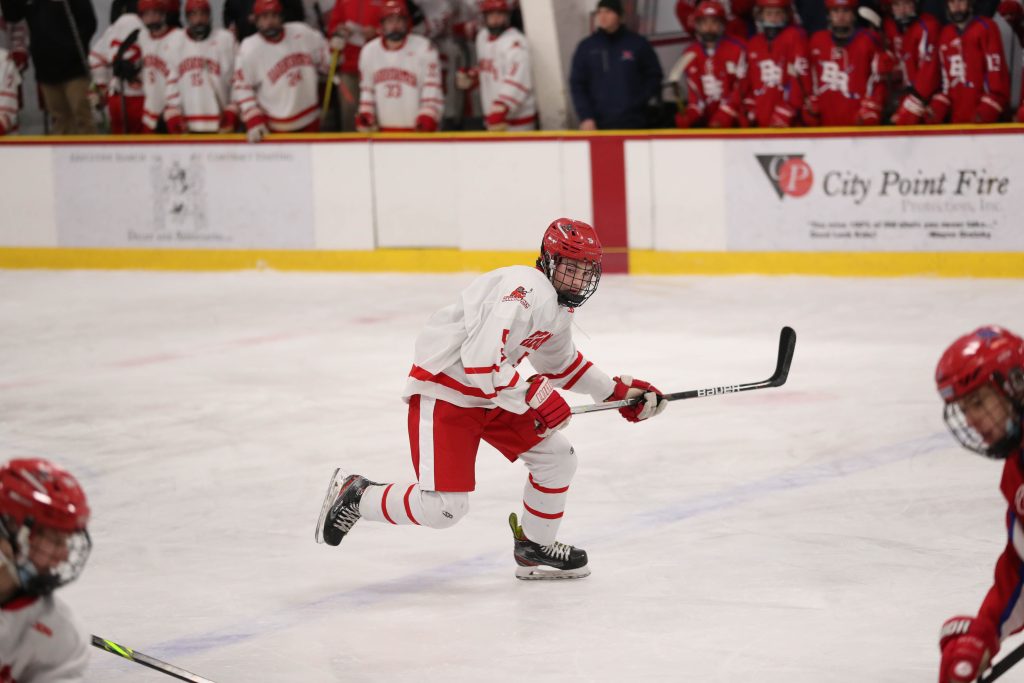 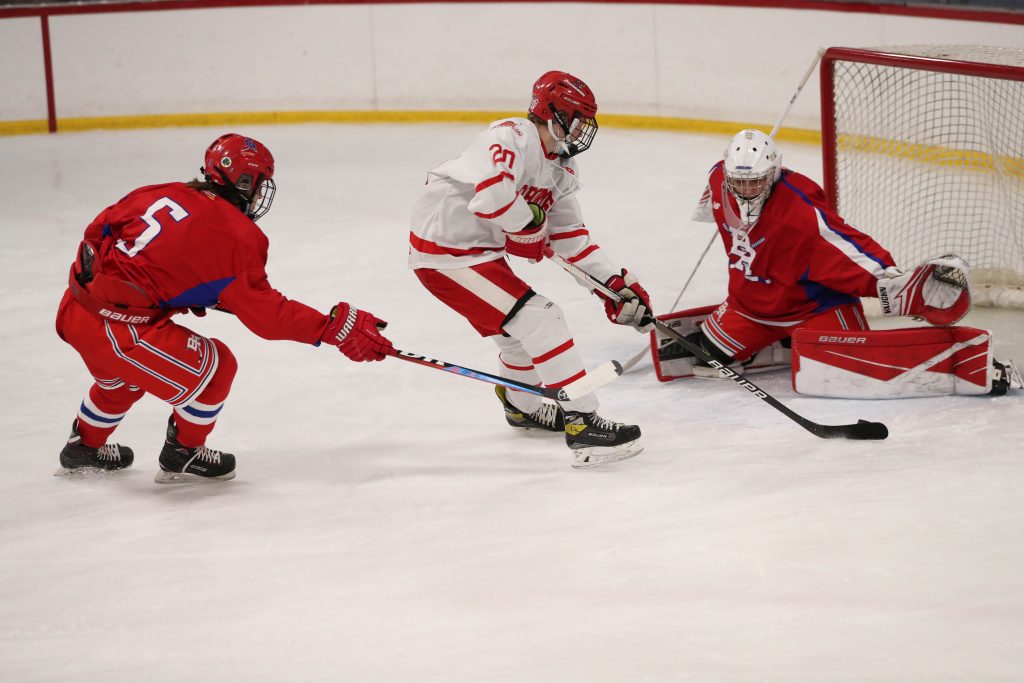 Junior forward Allu Linna gets by the defense and almost puts it past the goalie. 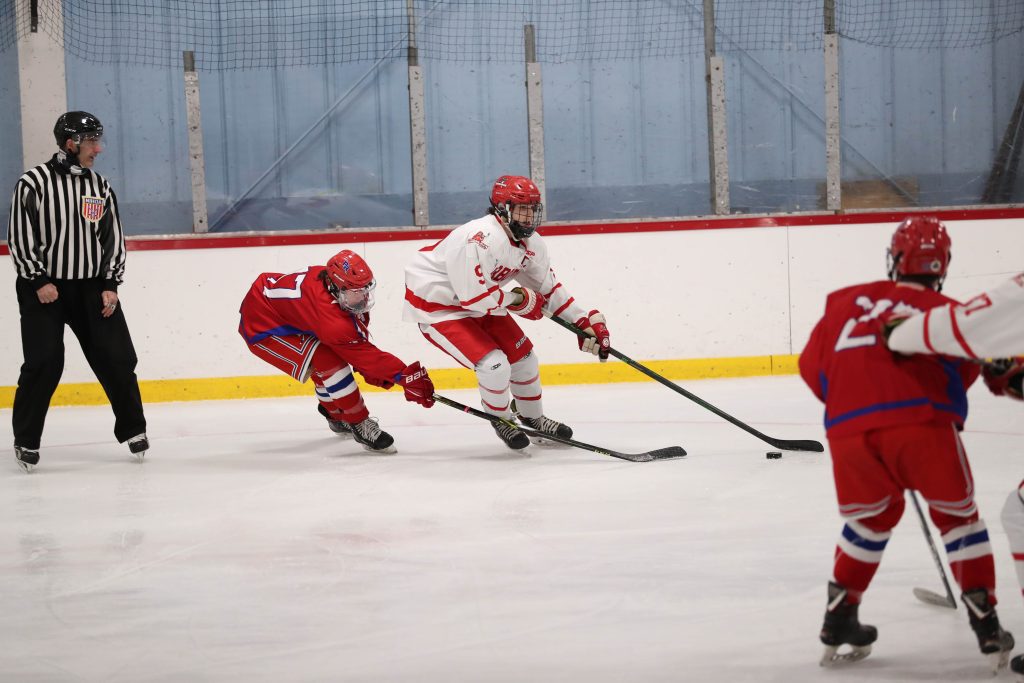 Senior captain Sean Garrity skates around the defender early in the game. 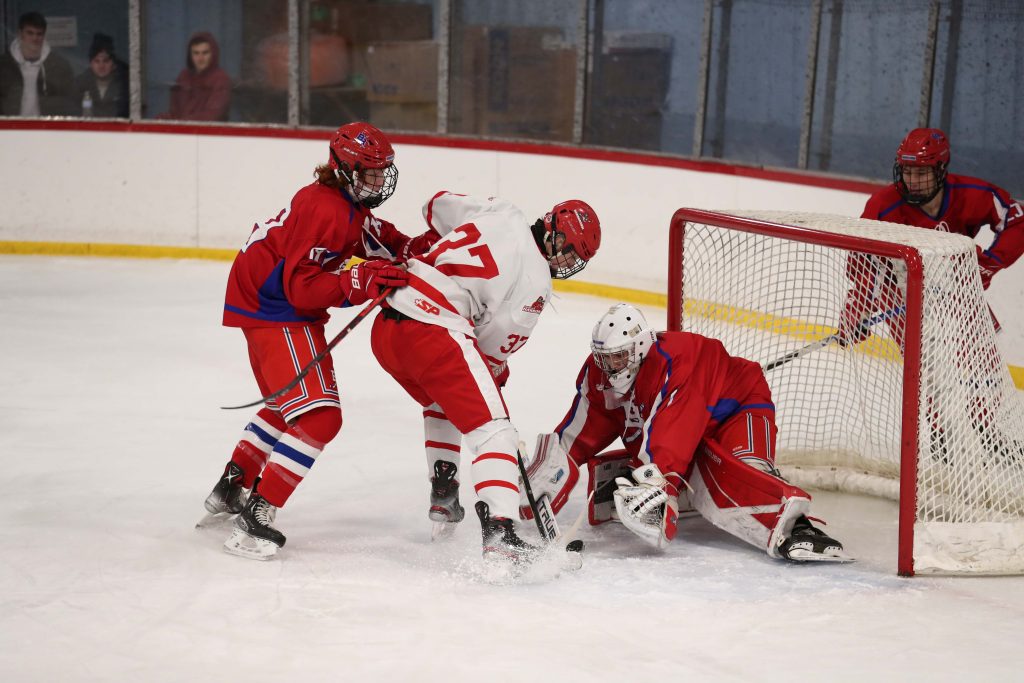 Junior forward Aidan Brazel battles for position in front of the net. 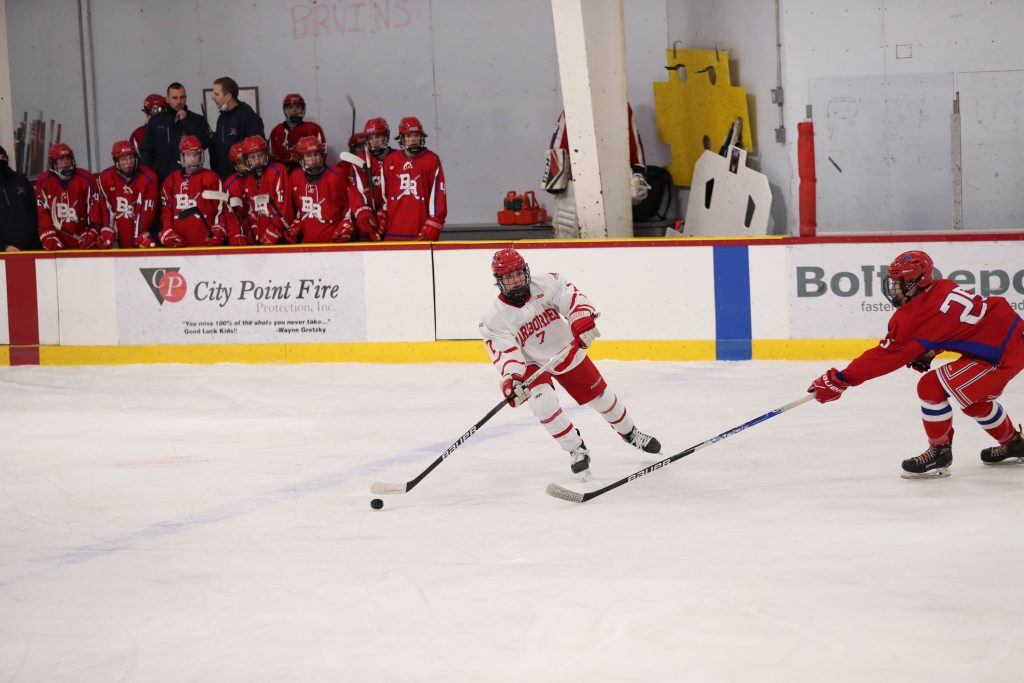 Junior defensemen Chase McKenna looking to move the puck in the first. 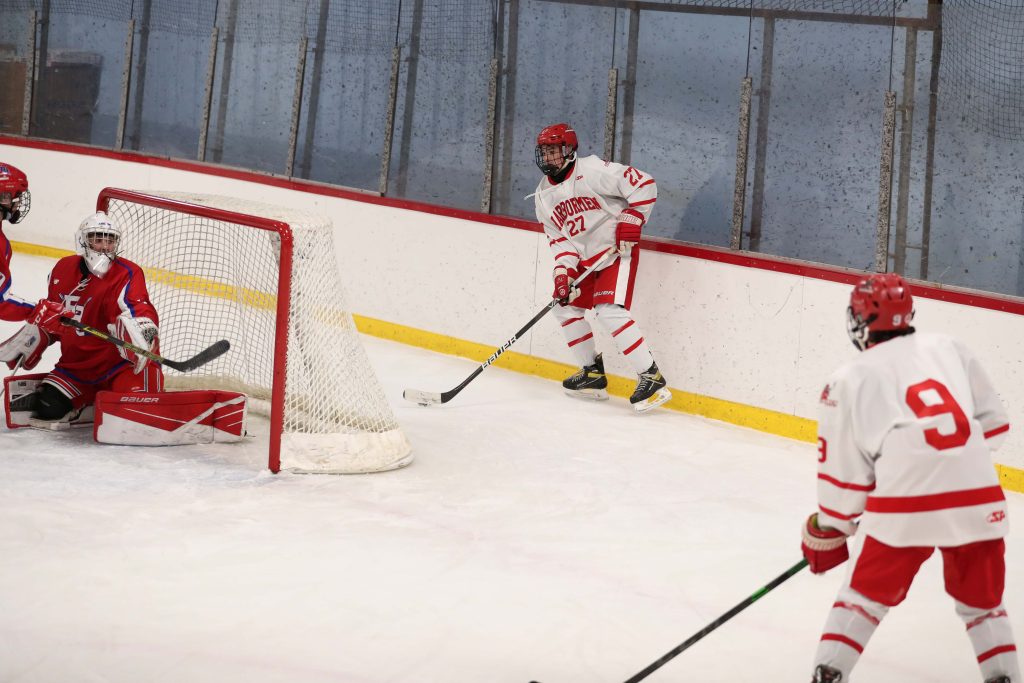 Junior Ace Concannon looks for a teammate from behind the net. 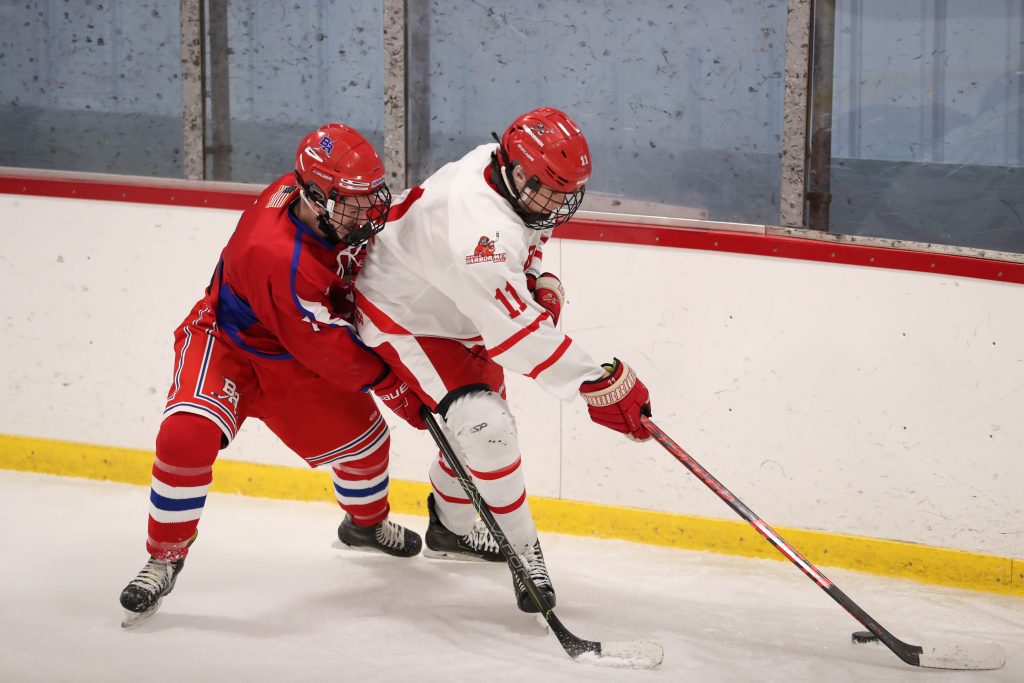 Junior defenseman Charlie Even battles for the puck behind his own net in the second. 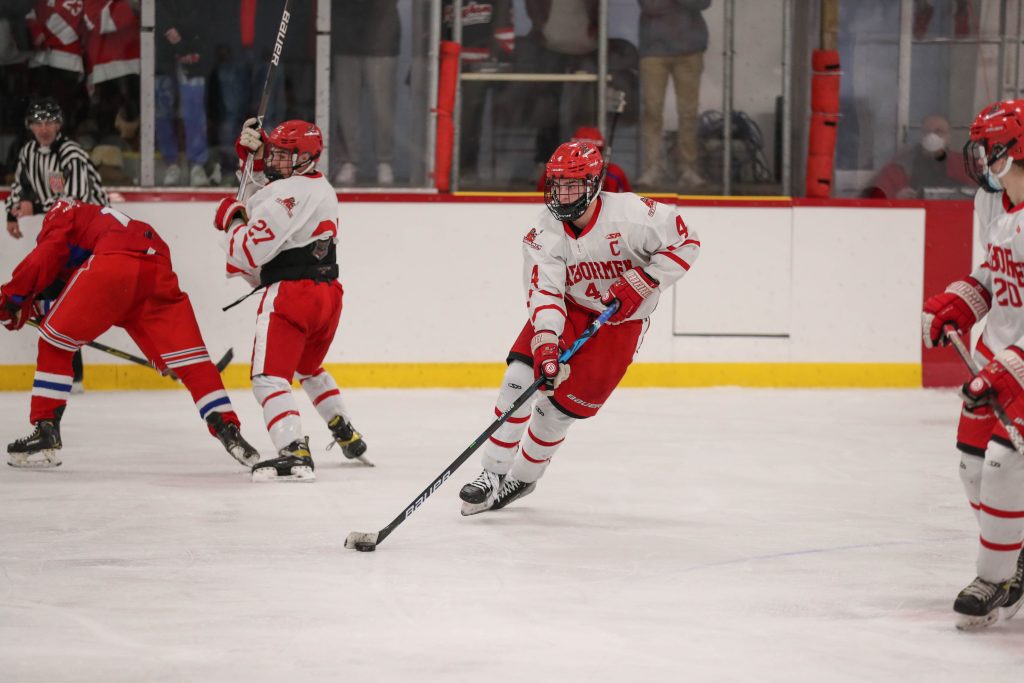