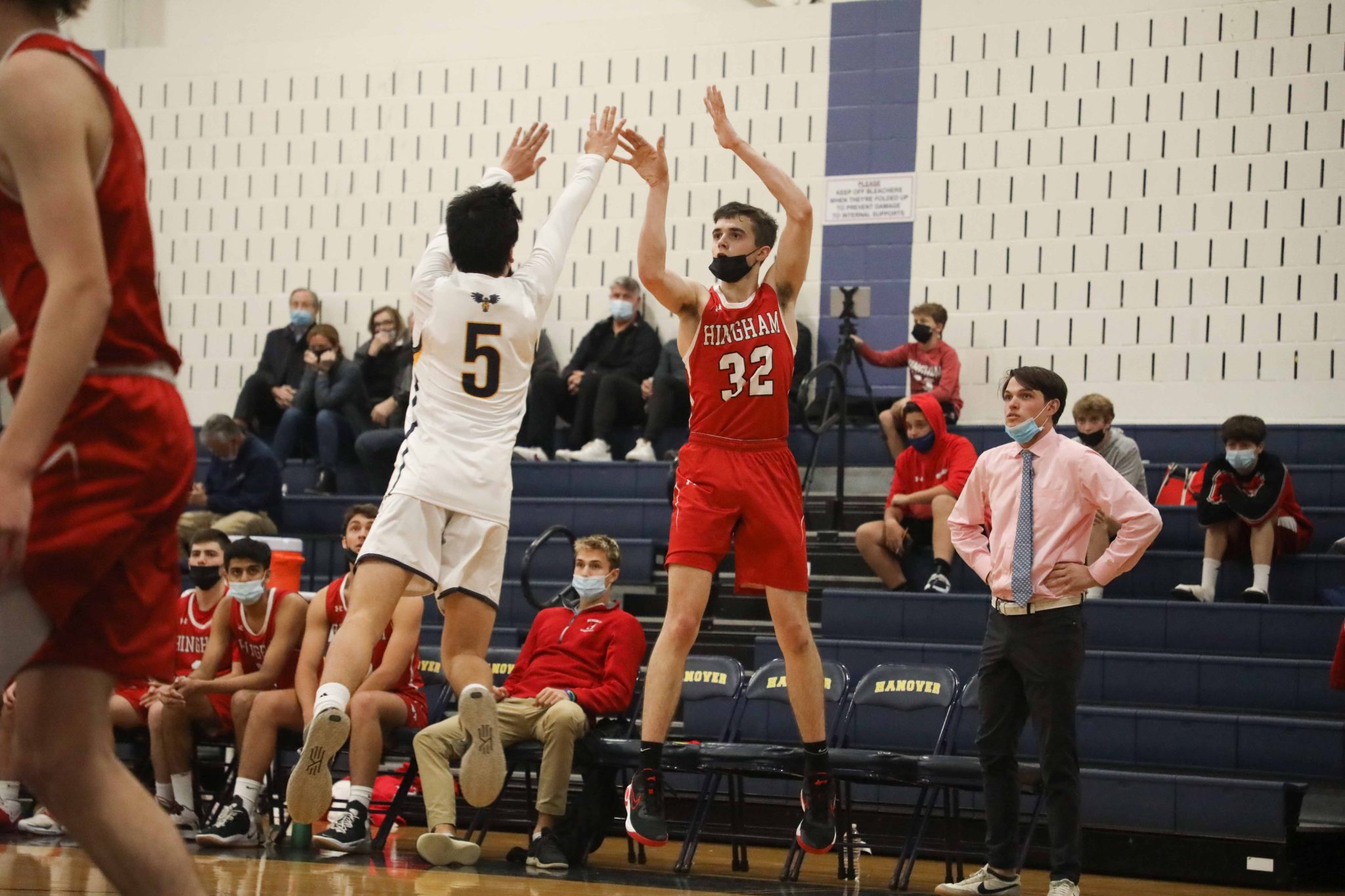 Junior captain Liam McBride led the team with 21 pts, including this 3 to open the 4th quarter.

The boys basketball team kicked off their 21-22 season on Tuesday night in Hanover against a tough Hawks team.  The Harbormen start the season with a slew of fresh faces as only a handful of players returning this year.  The core group of players include senior captains Nick Johannes and Curtis Murphy, junior captain Liam McBride, and senior John Sula.

Hingham opened the game strong behind McBride’s 8 first quarter points.  The Harbormen took a 15-12 lead into the second quarter.  They managed to stretch it to 25-16 before Hanover made a run late in the half to cut the deficit to 5.  Hingham extended their lead to 12 in the third quarter behind Johannes strong performance from the free throw line.  While he was struggling a bit from the floor, he was 6 for 7 from the line in the quarter and ended up with 18 for the game.  The Hawks battled back finishing the third frame on a 7-0 run.

McBride, who had a team high 21 points, drained a 3 to open the 4th quarter.  Hanover quickly followed with two quick 3’s of their own cutting into Hingham’s lead.  With two minutes to go, Hanover tied the game at 49-49.  Hingham took the lead again when junior Conor McCann put in an offensive rebound.  Another Hawks’ basket tied it again before Johannes drove to the basket to give the Harbormen the lead for good.  Murphy had a huge steal and 2 free throws with seconds remaining to secure the Hingham win.

“It was a tough challenge on the road,” coach Bob Kniffen said after the game.  “They had their fans going, it was a tough environment.  We have guys that are returning, but we have contributors that it was their first varsity experience, just like they do.  That’s the early season game that you are going to get, but I think the leadership tonight with our returning captains.  Curtis Murphy with the huge steal at the end and hitting the free throws, great communication on defense, showed great leadership.  Nick Johannes, I think he was in the 20’s for points tonight (18 points), he could have been a lot higher if he made the shots that are going to come the rest of the season for him. And Liam McBride with a huge performance for us tonight too.”

While their season is still in its infancy, Kniffen is impressed with some of the characteristics his team is already showing.

“Unselfishness and sacrifice that everyone on this team is willing to give is very encouraging and I think that can help us go along way,” Kniffen says.  “It’s hard to think of a group I’ve had that has been this unselfish.  And that’s key, from senior to the new guys.  It’s a good atmosphere to be around. It’s a lot of fun.”

He also pointed out the play of some his first time varsity players making big plays late in the game.

“(Junior) Eddie Rochte getting in with :30 seconds left in crunch time down by 2 is ready to go,” explains Kniffen.  “The confidence and support they know they have from their teammates allows us to do that in a tough situation, for a guy who’s in his first varsity game.  (Junior) Conor McCann, huge offensive rebound and put back to put us up 2.  That was his first varsity game tonight.  That’s the type of culture the returning guys are starting to develop and I’m excited to see it grow.”

The Harbormen are back at on Friday night for a league match-up down at Plymouth North. 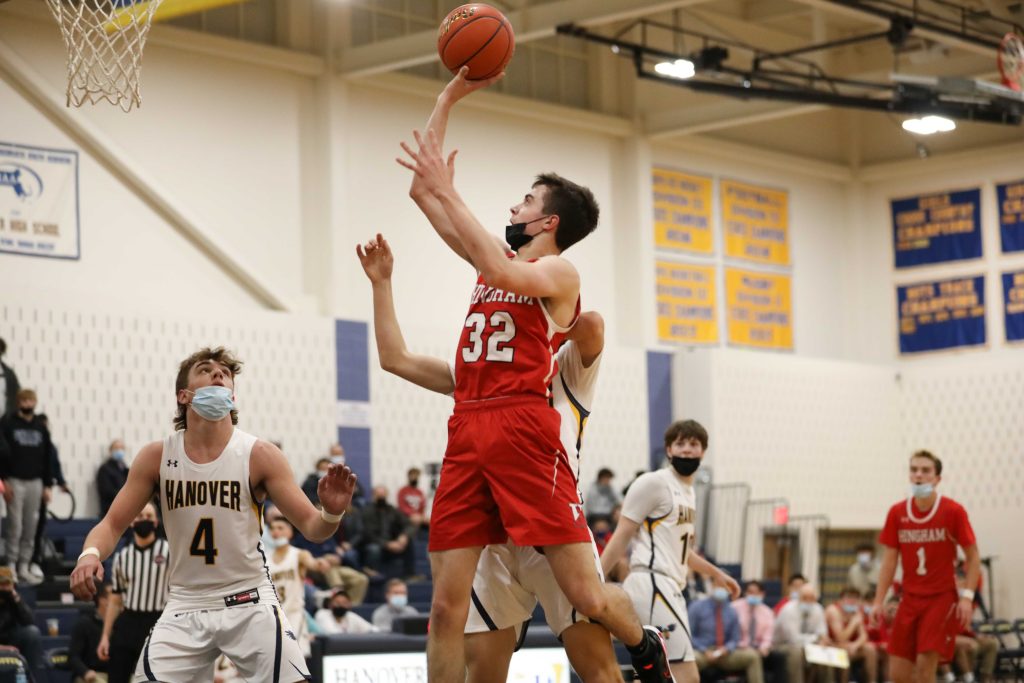 Senior captian Liam McBride with 2 of his 8 first quarter points. 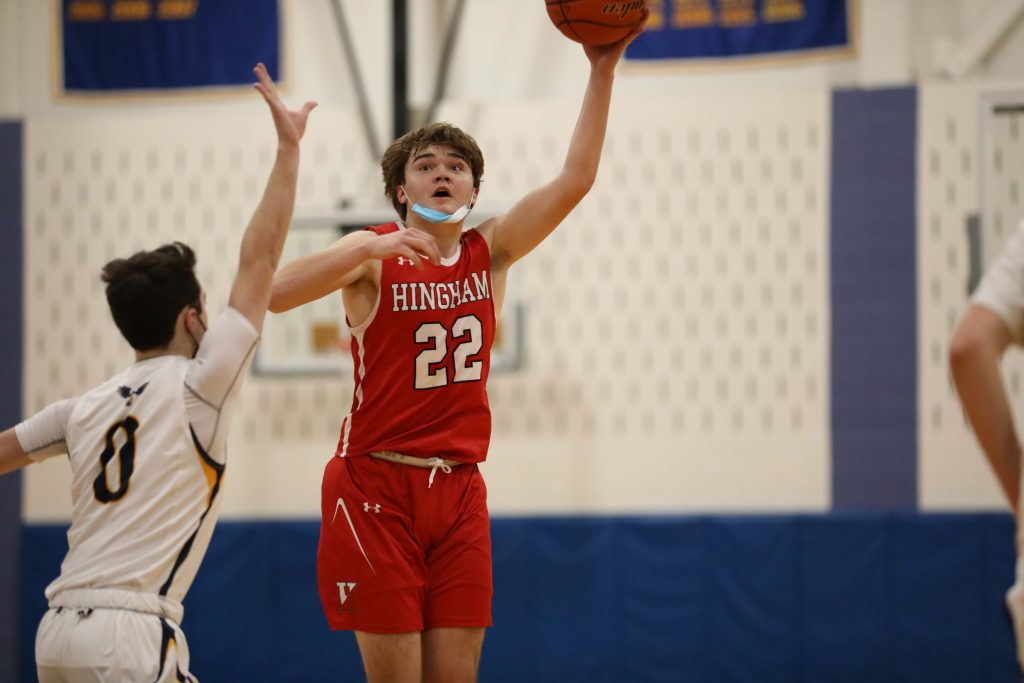 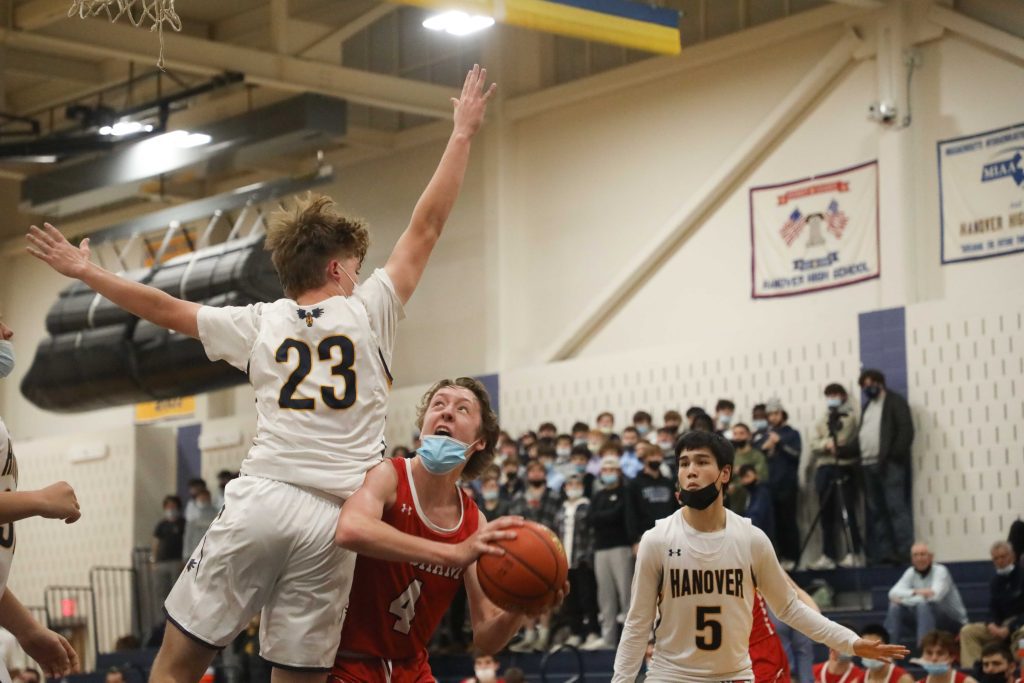 Senior captain Nick Johannes fought for every basket going to the line 11 times during the game. 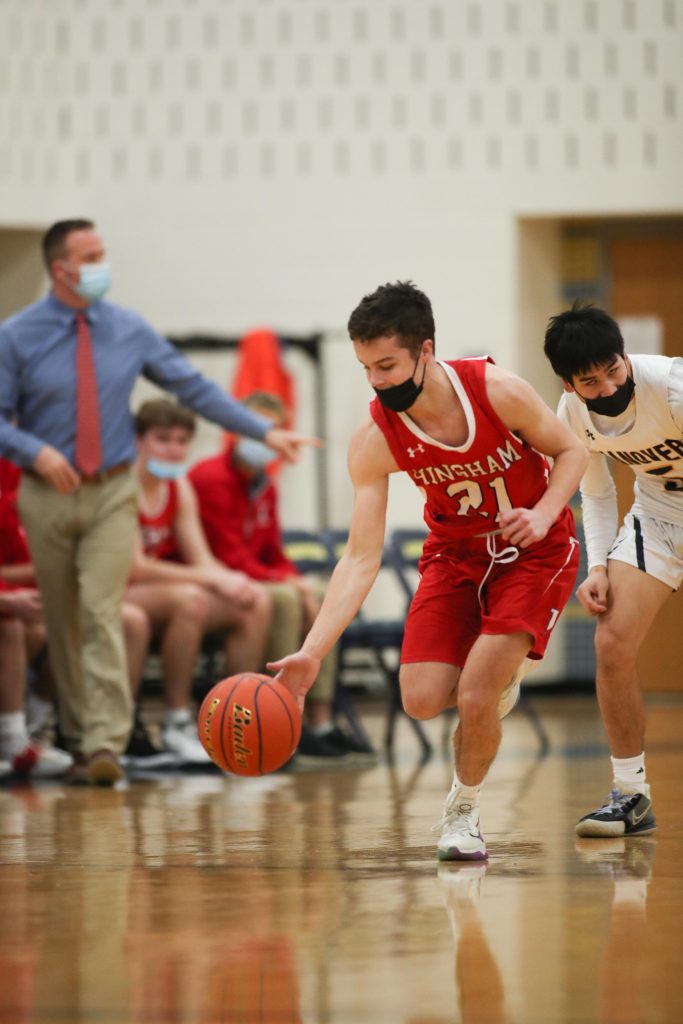 Junior Nick Dubios steals the ball late in the first half. 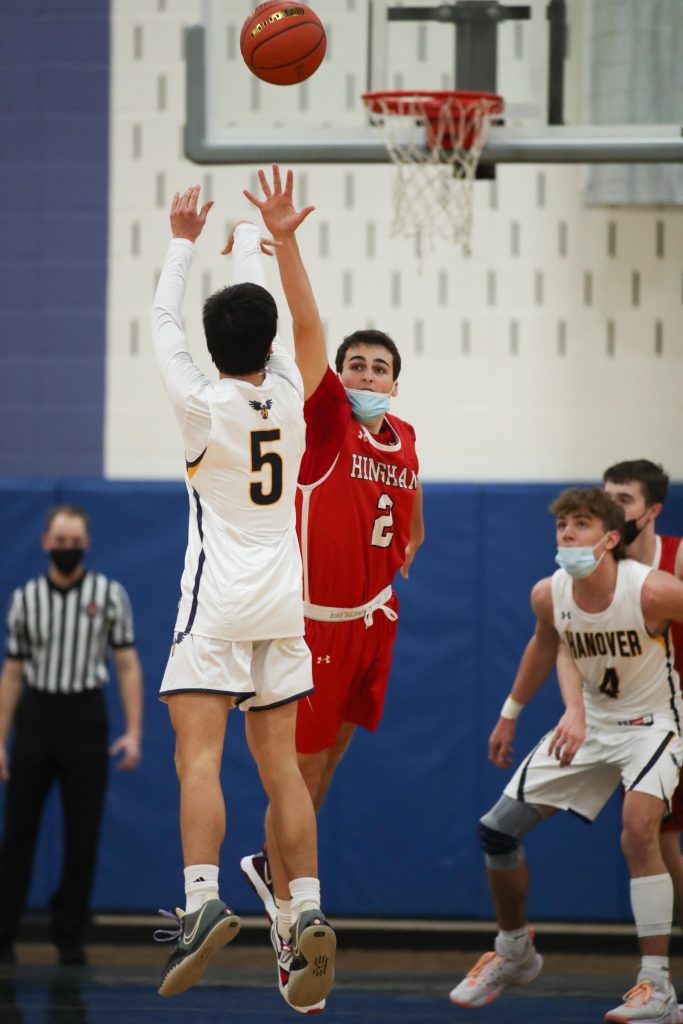 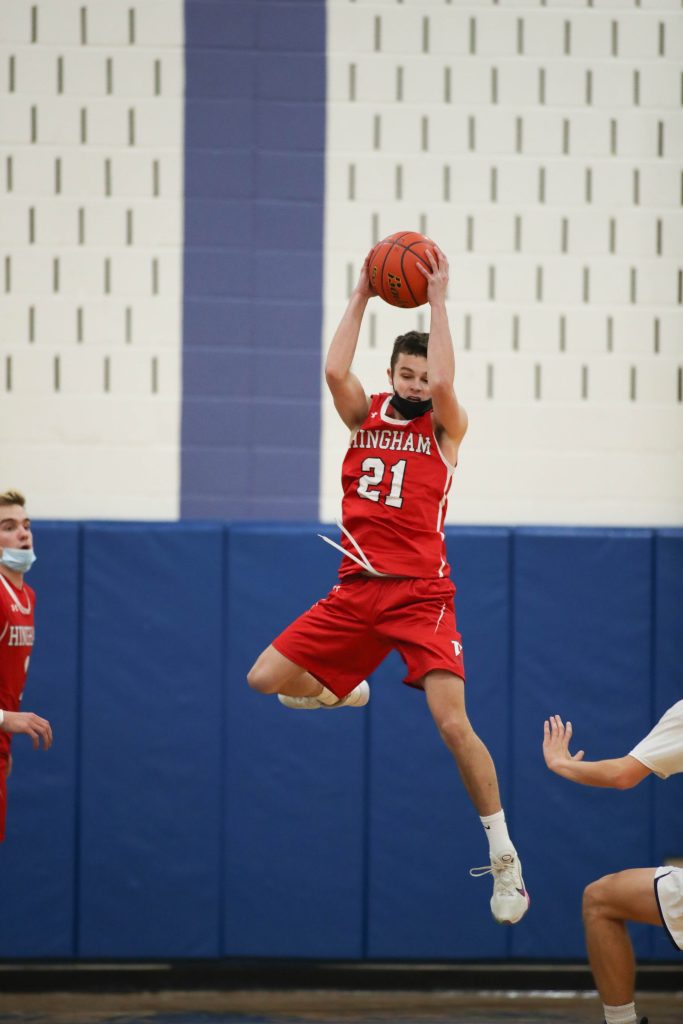 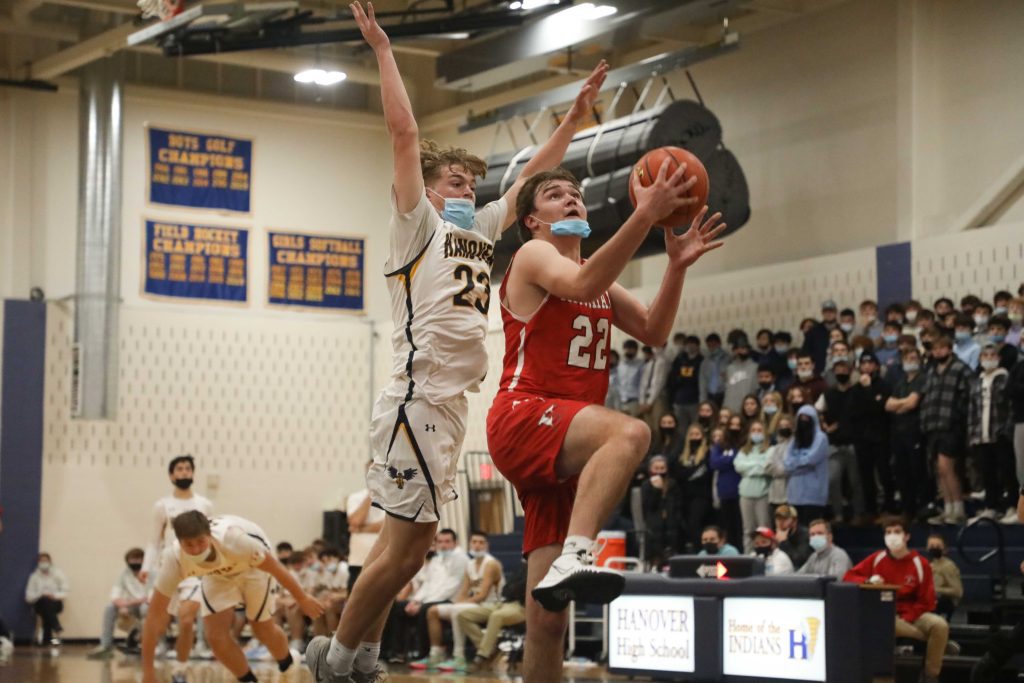 Junior Conor McCann drives to the basket in the second half. 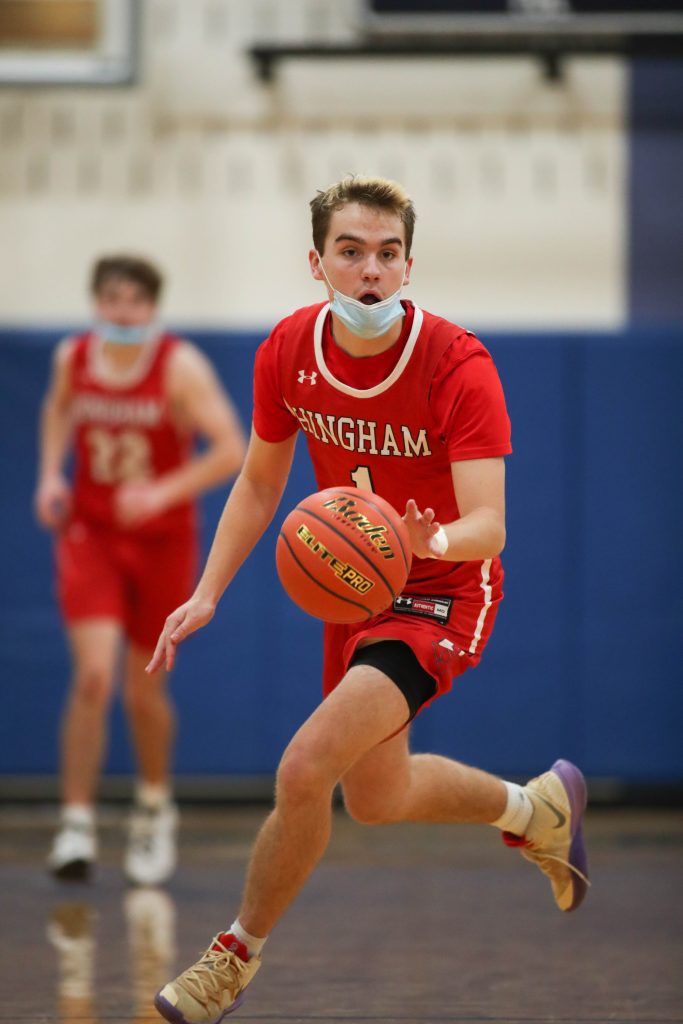