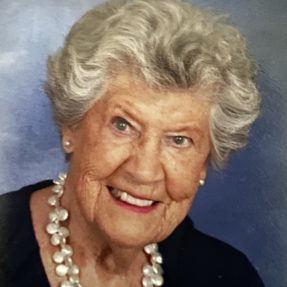 Alice Elaine Cox Shea, 96, of Hingham. MA, passed away peacefully in her home on October 24 with her family by her side. Elaine was born on July 19, 1925 in Providence, RI, the daughter of Alfred E. and Alice (Cartier) Cox. She was predeceased by her husband, Robert, F. Shea, her parents and her sister Thelma Cox Smith.

Elaine was a talented equestrian in her youth. She attended Seekonk Junior High in Seekonk MA, and graduated in the class of 1943 from Hope High School in Providence, RI. She enrolled in the class of 1948 at Rhode Island State College (URI) where she was a member of Chi Omega sorority. She was a cheerleader at RI, where she met the love of her life, Bob Shea, who was a star basketball player.

Elaine was a substitute teacher in the Stonington (CT) school system and St. Michael’s School in Pawcatuck from 1950 until 1964 when she became a social worker for the State of Connecticut. She retired in 1985. Elaine and Bob lived in Pawcatuck from 1946 until they moved to Lighthouse Point, FL full time in 1996. They returned to New England in 2008 when they moved to Hingham, MA.

Elaine loved playing the piano, entertaining, growing up with horses, the beach, the Boston Red Sox and reading a good book. She always had a book nearby, and was reading right until the end. Elaine also loved to travel, especially to her beloved Nova Scotia where her family is from. She was a member of Seaside Beach Club in Westerly, RI for almost 50 years. Elaine was a volunteer for the Westerly Hospital for many years and volunteered for the Coral Door in Lighthouse Point, FL, a consignment shop for the Broward County Hospital.

Elaine is survived by her four children: Robert Shea, Jr. of Westerly, RI, Gail Shea Grainger and her husband John of White River Junction, VT, LTC(Ret) Karen E. Shea of New Port Richey, FL, and Leanne Shea Jenkins and her husband Skip, of Hingham, MA. She is also survived by her six beloved grandchildren, Kerry Shea Abbott, John C. Grainger III, Kelly Hagerich, and Emmett, Patrick and Sam Jenkins, as well as eight great-grandchildren, and 15 nieces and nephews. In lieu of flowers, consider a donation in Elaine’s memory to the Hingham, MA Public Library, the Dana Farber Cancer Institute, or a random act of kindness to brighten someone’s day.

A funeral Mass will be held at St. Michael’s Church in Pawcatuck, CT at 10 AM on Thursday, November 18th.