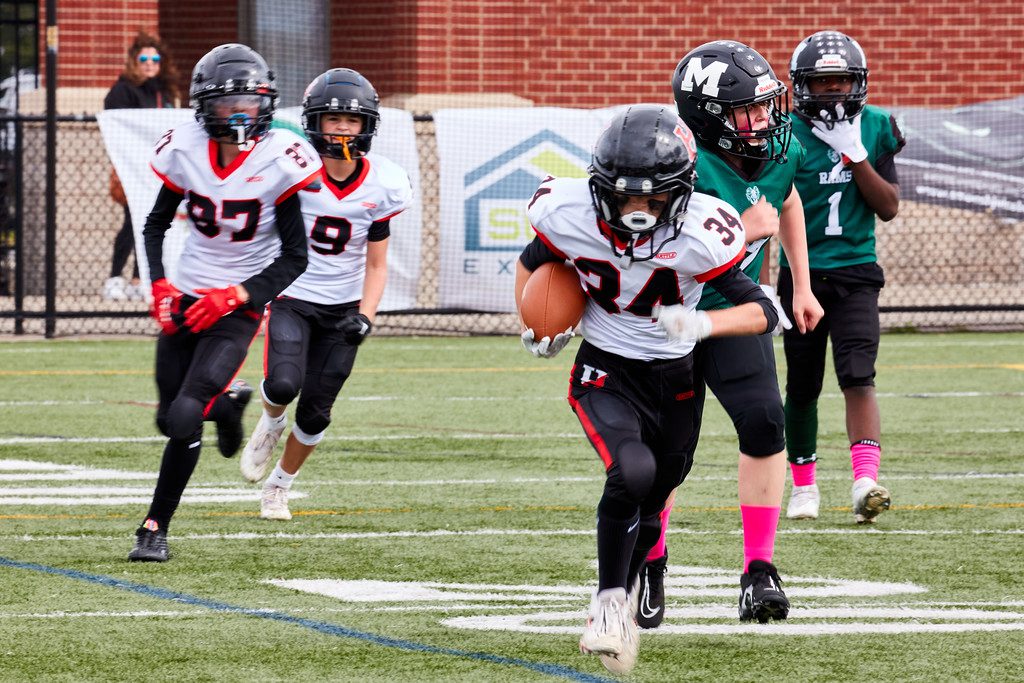 #34 Jack Hart returns and interception down to the 3 yard line.

The 6th graders exemplified that “It’s the will to prepare that matters”. Facing the leagues top two teams on back to back Sundays was a daunting task, but the Raiders practiced hard and late into the evening these past weeks and that preparation resonated in them dominating both Bridgewater 34-6 and Marshfield 30-0.

This Sunday the Raiders defensive front line was ready for battle from the get go against Marshfield as Frank Conway stuffed the run, then Frank Cavagnaro shot the gap tackling the runner for a loss to force a turnover on downs. Marshfield’s defense proved up to the task stopping Hingham on 4 downs. Hingham’s defense was relentless in their attack as Brayden Huber and Shamus Devine made consecutive tackles for loss. Bruce Farren stepped up and sacked the QB for a loss back to the 30 yard line forcing another turnover on downs bringing the first quarter to a scoreless close.

Up to this point the story of the day was the Raiders defense who would at times bend but never break as John Peterson, Will Berkeley, Bruce Farren and Andy Gerlach shut down the run forcing another turnover on downs. Taking the snap under center QB Hudson Garrity pitched the call to RB Evan Tomasello who ran outside for a 61 yard gain deep into Marshfield territory. QB Garrity rolled right and threw a short pass to Shamus Devine who shed several tacklers burrowing his way into the end zone for a touchdown. On the point after Garrity followed his blockers Frank Cavagnaro and Andy Gerlach for an 8-0 lead midway through the second quarter. On the kickoff Andrew Nolan tried a surprise onside kick but Marshfield recovered at midfield. With Marshfield on the move, edge rushers Brayden Huber and John Peterson tackled the ball carriers for losses forcing a turnover on downs.

On offense QB Garrity used his legs to pick up a first down on the ground. Then Garrity rolled right throwing to a well covered Brayden Huber who carried defenders on his back running for a first down. QB Hudson now opened it up at threw to Evan Tomasello in the flat who shed multiple tacklers for a 38 yard TD and a 14-0 lead. On defense Shamus Devine alertly recovered a Marshfield fumble and rambled 48 yards for the touchdown. On the point after Hudson sprinted outside for the 22-0 lead. With seconds remaining in the half Marshfield, feeling desperate, gambled by throwing a long pass which a leaping Jack Hart intercepted and was off to the races down the sidelines until he was tripped up at the 3 yard line and the Raiders took a commanding 22-0 lead into halftime.

Receiving the ball to begin the second half Evan Tomasello continued his rushing success following blocks from Duncan Wilder and Frank Conway for a 23 yard gain. QB Garrity executing the run pass option throwing a dart to Shamus Devine who got behind the defenders for a touchdown in the back of the end zone. Reading the coverage, Garrity ran off tackle for the extra point and a 30-0 lead. Controlling the ball and the clock on offense the Raiders now led by QB Neil Deininger and front line blockers Max Fleck, Will Hetherington, Christopher Donegan and Grant Riordan allowed Deininger and Jack Hart to run for first downs. The defense shut it down as tackles from Duncan Wilder, Johnny Heller, Emery Olin and Connor Jones preserved the win 30-0 putting the 6th grade Raiders atop the league standings.